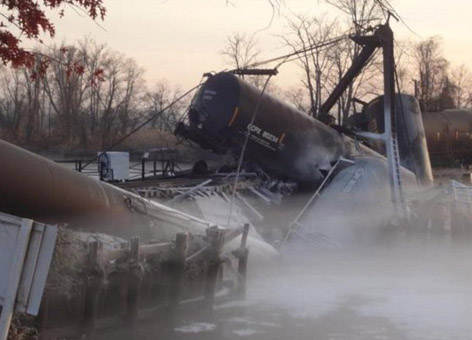 Seven train cars derailed when the bridge over the Mantua Creek collapsed Friday morning. Four tank cars containing vinyl chloride were dumped into the creek. Nearby residents were evacuated and schools were locked down. Nearly 20 people complained of respiratory distress from the vinyl chloride vapor that leaked from the tank cars. (Photo: Rae Lynn Stevenson/South Jersey Times. All rights reserved.)

UPDATED DEC. 17, 2012 — Recovery operations are now complete for the derailed train cars carrying vinyl chloride. On Nov. 30, 2012, a train transporting the chemical vinyl chloride derailed while crossing a bridge that collapsed over Mantua Creek, in Paulsboro, N.J., near Philadelphia. Four rail cars fell into the creek, breaching one tank and releasing approximately 23,000 gallons of vinyl chloride. Local, state, and federal emergency personnel responded on scene. A voluntary evacuation zone was established for the area, and nearby schools were ordered to immediately take shelter and seal off their buildings.

Vinyl chloride, which is used to make plastics, adhesives, and other chemicals, is a toxic gas. During this accident, most of the chemical was released directly to the air, and response teams worked to determine how much might have dissolved in the creek's waters, which feed into the Delaware River. U.S. Coast Guard Sector Delaware Bay contacted NOAA's Office of Response and Restoration (OR&R) and requested scientific support for this environmental and public health threat.

OR&R had a Scientific Support Coordinator (SSC) at the scene of the spill to work with the Coast Guard as they attempted to salvage the derailed cars from the creek and collapsed bridge. While the SSC departed on Dec. 6, a NOAA incident meteorologist remains at the incident command post to provide custom weather forecasts for the affected area, for air monitoring and to identify safe operating conditions for the crane work and other salvage operations. 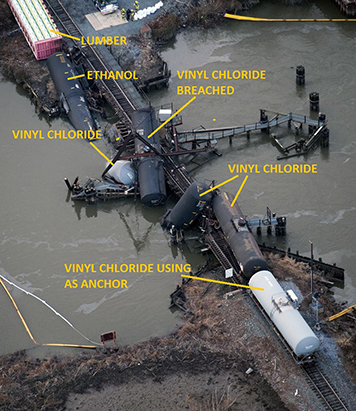 A detailed overview of the overturned train cars carrying vinyl chloride in New Jersey's Mantua Creek. The rail car in the foreground is being used as an anchor to stabilize the derailed cars. (Conrail Derailment Incident Command)

OR&R's Emergency Response Division also was involved from NOAA's Seattle offices, where they investigated potential problems in case the vinyl chloride accidentally were discharged into the water during salvage operations. In addition, two scientists from NOAA's Center for Operational Oceanographic Products and Services (CO-OPS) had been dispatched to Paulsboro to deploy a current meter and forecast the tides specifically for Mantua Creek (which is driven by tidal flows) to schedule safe crane and dive operations. To help the National Transport Safety Board's investigation into this incident, CO-OPs scientists also will recreate the tidal cycle conditions during the time of the incident.

Removing the derailed train cars proved to be a logistically complicated process. First, the Coast Guard coordinated the removal of the last 600 gallons of vinyl chloride from the breached tank by using acetone and suctioning out the vapors before attempting to move the tank. Next, the response team successfully brought in cranes and barges to remove the rail cars from Mantua Creek, re-establish them on the rail, and have them transported away from the site. Recovery operations for the derailed train cars ended on December 17.