Transportation of Crude Oil Along the West Coast

Nov. 3, 2016 -- The Pacific States/B.C. Oil Spill Task Force has updated its West Coast crude oil transport map. The map depicts the routes of crude traveling by rail, tanker vessel, pipeline and barge across the western states and British Columbia. It also captures the locations of current and proposed facilities, refineries and terminals. The rapid growth in crude by rail transport has highlighted response and preparedness gaps along the rail line.

The task force also tracks the volumes of crude transported across the region. This data is collected on an annual basis and summarized in a report available to the public. The task force continues to track the volumes of crude movement annually to assist in oil spill prevention, preparedness and response across the West Coast. Recently, the task force partnered with NOAA’s Office of Response and Restoration to incorporate its oil spill data into NOAA’s Environmental Response Management Application (ERMA), an online mapping tool that integrates both static and real-time data, such as Environmental Sensitivity Index (ESI) maps, ship locations, weather, and ocean currents, in a centralized, easy-to-use format for environmental responders and decision makers. You can view the task force's map on ERMA here. Since 2002, the task force has been collecting data on oil spills in Washington, Oregon, California, and Hawaii, providing information on the size of spill, location, type of material and substrate (on land or water). The Pacific States/British Columbia Oil Spill Task Force was formed in 1988 by the governor of Washington and premier of British Columbia, after the oil barge Nestucca collided with its tug along the Washington coast. The following year, the Exxon Valdez spill in Prince William Sound led to Alaska, California, and Oregon joining the Task Force. Hawaii became a member in 2001, creating a broad coalition of western Pacific states and British Columbia, united in their efforts to prevent and respond to oil spills across the West Coast. Sarah Brace is the Executive Coordinator of the Task Force. She leads the Task Force projects, studies and outreach activities focused on spill prevention, preparedness and response across the western States of AK, CA, HI, OR and WA and British Columbia. 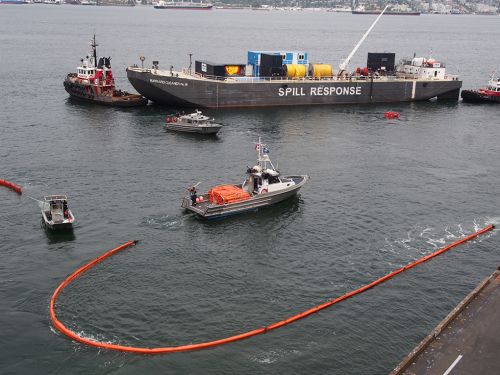 Map of current rail routes, interstate pipelines and barges transporting crude across the West Coast.
Back to top