MARCH 11, 2013 — Two years after the devastating 9.0 earthquake and tsunami struck Japan, removal work is slated to begin for the 65-foot Japanese dock which washed ashore in a remote area of Washington state. The Government of Japan eventually confirmed the dock had been swept away from Misawa, Japan, during the 2011 tsunami. On December 18, 2012, the dock beached along the boundaries of Olympic National Park and NOAA's Olympic Coast National Marine Sanctuary in Washington state. 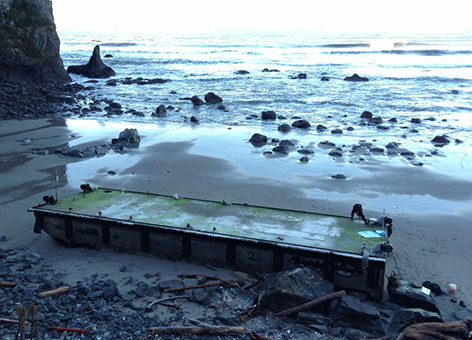 NOAA has contracted a local salvage company in Washington to complete the removal efforts by early April. The contracted company will work with the Sanctuary, Park Service, and local partners in Washington to remove the dock by helicopter after dismantling it on site. This was determined to be the safest and most efficient method for removal. Weighing approximately 185 tons, the dock is 65 feet long, 20 feet wide, and 7.5 feet tall. Most of the dock's volume is Styrofoam-type material encased in steel-reinforced concrete.

According to the Washington State Department of Ecology's website, "The concrete has already been damaged, exposing rebar and releasing foam into the ocean and onto the beach where it can potentially be ingested by fish, birds, and marine mammals. Leaving the dock in place could result in the release of over 200 cubic yards of foam into federally protected waters and wilderness coast."

The cost of removing the dock is being covered by NOAA's Office of National Marine Sanctuaries, the National Park Service, and part of the $5 million fund Japan gifted to the U.S. for tsunami debris cleanup. NOAA's Office of Response and Restoration oceanographers successfully modeled the approximate grounding location of the dock after initially being spotted by the U.S. Coast Guard in December of 2012.

Beginning on March 11, 2011, the earthquake and resulting tsunami along Japan's eastern coast claimed nearly 16,000 lives, injured 6,000, and destroyed or damaged countless buildings. As a result of the disaster, NOAA expects a portion of the debris that the tsunami washed into the ocean, such as this floating dock, to reach U.S. and Canadian shores over the next several years. Find more information about Japan tsunami marine debris in this NOAA video and infographic, as well as at the NOAA Marine Debris Program website.