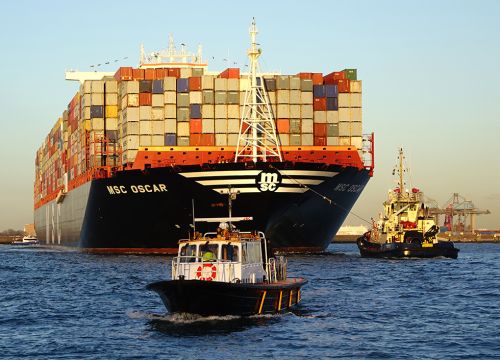 Massive container ships, carrying unprecedented amounts of fuel and cargo, are one of many developments in marine transportation that also is bringing new risks of oil spills to the high seas. Shown here is the MSC Oscar, one of the largest container ships in the world. (Credit: kees torn, Creative Commons Attribution-ShareAlike 2.0 Generic license)

This is a guest post by University of Washington graduate students Megan Desillier, Seth Sivinski, and Nicole White.

Developing technologies have also allowed for mega-ships (unprecedented in size) and newer cargoes to begin transiting the ocean.

These developments could bring new or greater hazards, including oil spills, for the maritime shipping network worldwide.

Our group of three graduate students at the University of Washington, with the support of the International Tanker Owners Pollution Federation (ITOPF) and NOAA's Office of Response and Restoration, sought to understand how the world's shipping dynamic has changed in recent years and how these emerging challenges in marine transportation will affect that dynamic. The ITOPF, NOAA, and the marine industry can consider these emerging risks in marine transportation as they plan for the future.

Here's what we found.

Based on climate changes that have already occurred, ports are likely to experience more intense storm events and increased precipitation. In the more distant future, this greater degree of storminess will combine with sea level rise, causing both the probabilities and consequences of risk to marine transportation to increase.

Given the resources and services that ports provide, climate change could seriously impact the efficiency of the greater maritime transportation network. While infrastructure risks can be mitigated, it is important to note that according to experts in the field interviewed during this project, the majority of ports have made few preparations or plans for sea level rise related to climate change.

Although Arctic climate change is creating new shipping opportunities, these come with great challenges for the marine transportation system, especially in the second half of this century. At sea, the retreat of sea ice is accompanied by an increase in storminess, increasing risks to ships and shipping infrastructure from storm surge and waves. On land, permafrost has already begun to thaw, contributing to impacts to infrastructure, including railroads, ice roads, airstrips, and pipelines.

Taken together, the changing Arctic climate will require changes in the marine transportation system both at sea and on land. These changes include improved infrastructure along shipping routes, harbors of refuge, search and rescue capabilities, ice-breaking services, and coordination among organizations with a central role in spill response. 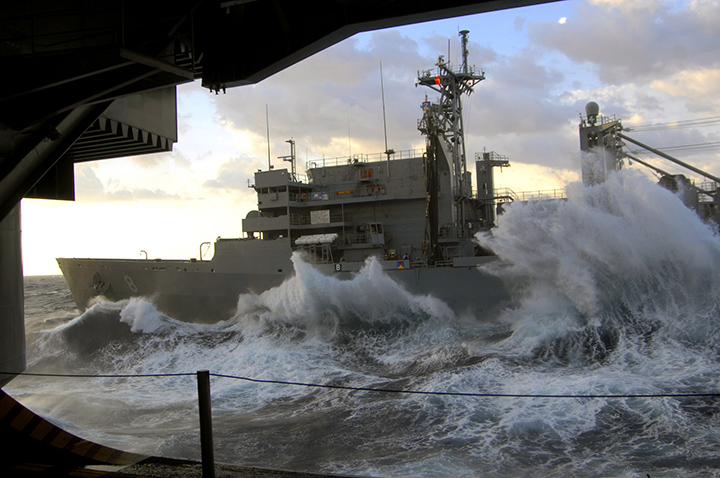 A changing climate opens up greater potential for marine traffic in the Arctic, but it is accompanied by an increase in storms and other threats to maritime infrastructure. Here, rough seas pound the hull of support ship USNS Arctic as it sails alongside aircraft carrier USS Harry S. Truman during a mission to the Arctic. (U.S. Navy)

An increase in maritime activity surrounding both the Panama and Suez Canals could increase the risk of incidents in these areas, especially as infrastructure development around them increases. Larger canals will allow for bigger ships, which will make more concentrated port calls. This means that the vessels will spend more time in ports and unload more cargo. This is expected to be most common on the eastern seaboard of the United States as the Panama Canal expands.

In addition, the lifting of the American ban on crude oil exports could impact imports and exports of both crude and refined products. Much of the increase in oil exports from the United States would head to Europe and Asia.

The Arctic is receiving considerable emphasis as an emerging trade shortcut for maritime shipping, especially from Asian nations, but currently the majority of the activity in this region comes from tourism, mining, and fossil fuel extraction. This includes marine traffic supplying these activities as well as the transport of extracted resources.

However, these massive vessels potentially increase the consequences of pollution-related incidents, as they carry larger amounts of fuel and cargo, which could result in larger oil spills. Incidents involving these vessels may also be more difficult for salvage and response organizations to mitigate as they would have to remove more fuel and cargo from larger disabled ships.

Another vessel to watch is the LNG carrier. These vessels transport liquefied natural gas (LNG), which requires special attention to temperature and pressure for it to remain in liquid form. U.S. imports and exports of LNG are expected to increase. This will require monitoring during transit, as well as safe handling practices while being loaded and unloaded in port.

Increased vessel automation potentially introduces new risks via reduced crew size and increasing bridge automation, even though enhanced bridge automation ostensibly represents a safety improvement. For example, if a vessel is being operating by a "minimally manned crew," crew members may find it harder to meet required rest hours, becoming fatigued. In a situation where a fatigued crewmember is operating automated equipment on the bridge, the chances for human error increase. Additionally, if that equipment fails, fatigued crewmembers might find themselves relying largely on their own technical skills to mitigate the risks—all while fatigued.

Finally, we've noted concern over the introduction of new ship propulsion fuels, such as LNG. The emergency response community lacks experience with LNG propulsion fuel incidents, leaving some uncertainty surrounding the probability and consequences of such an accident. As LNG is further adopted as a propulsion fuel, the supporting infrastructure to transport it will have to be updated as well. Training for safe handling and transport of the fuel will also need to be further introduced to crews and ports in order to mitigate the associated risks of managing this fuel.

Response organizations will need to emphasize new contingency planning and condition monitoring and assessment in response to these changes in the marine transportation system. For example, there is a fairly high certainty regarding how sea-level rise and other climate change–associated impacts will affect ports in coming years, and ports will need to take the changing environment into account in their planning and preparedness to reduce the likelihood of future incidents associated with these changes.

This contrasts with the Arctic where there are higher uncertainties associated with the emerging risks outlined here. In the Arctic, response organizations will need to focus on monitoring the evolution of climate change impacts and shipping activities as well as participate in the development of mitigation actions. All parties will need to identify the steps that will lead to safe Arctic shipping, salvage, and pollution response.

While there is no one complete solution to address all risks, our analysis offers information relevant to multiple sectors of the maritime transportation network. By forging relationships among these sectors, response organizations will be able to better develop the most comprehensive responses to address pressures and gaps emerging as a result of the changing environment, changing patterns of trade, and developing technologies. And hopefully these organizations will be even better prepared for the oil spills of the future, no matter the scenario.

Megan Desillier, Seth Sivinski, and Nicole White are Master's candidates at the University of Washington (UW) in the School of Marine and Environmental Affairs working with faculty advisors Robert Pavia and Thomas M. Leschine. The team completed the research of emerging risks in marine transportation for the International Tanker Owner Pollution Federation (ITOPF) and was provided additional assistance in their research from the National Oceanic and Atmospheric Administration (NOAA). The students completed this research over the course of an academic year as part of the thesis/capstone requirement for the School of Marine and Environmental Affairs at the UW. Our team would like to thank our sponsor, ITOPF, as well as NOAA for providing additional assistance. To contact the authors, please email Robert Pavia at bobpavia@uw.edu.

The views expressed in this post reflect those of the authors and do not necessarily reflect the official views of ITOPF, NOAA, or the U.S. federal government.