This is a guest post by the Emerging Risks Workgroup at the University of Washington in Seattle.

APRIL 4, 2014 -- From fracking to oil trains, the landscape of oil production and transportation in North America has been undergoing a major transformation in recent years.

This transformation has implications for how NOAA's Office of Response and Restoration prepares its scientific toolbox for dealing with oil spills. Our group of graduate students from the University of Washington partnered with NOAA on a project to identify major trends in the changes to risk in transporting oil and natural gas along U.S. coasts and major rivers. 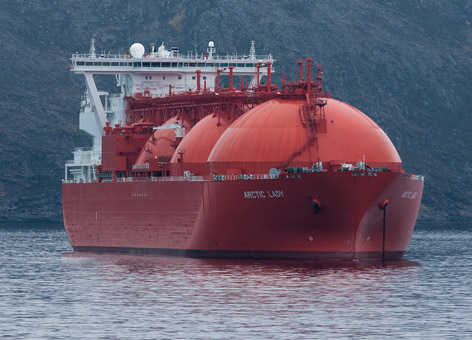 Hydraulic fracturing, or fracking, has opened up natural gas production in the United States, to the point that industry is increasingly looking to export it as liquified natural gas (LNG) via tanker. (Photo: Amanda Graham/Creative Commons Attribution-NonCommercial-NoDerivs 2.0 Generic License)

To study these risks, we researched the trends that are changing the way in which petroleum is produced and transported in the United States. We also examined three high-profile incidents:

We reviewed the lessons learned from each of these responses and determined whether they also apply to the emerging risks we identified. 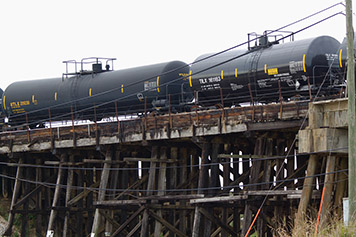 According to the Association of American Railroads, U.S. railroads shipping crude oil jumped from 9,500 carloads in 2008 to an estimated 400,000 carloads in 2013. (Photo: Roy Luck/Creative Commons Attribution 2.0 Generic License)

The largest catalyst for changes in the petroleum market in the U.S. is the proliferation of hydraulic fracturing, or "fracking," combined with horizontal drilling. Fracking is a technique which forces fluids under great pressure through production wells to "fracture" rock formations and free greater amounts of crude oil or natural gas. This has drastically changed the amount of petroleum produced, where the petroleum is produced, and where it is transported.

Fracking also comes with its own transportation issues. The large amounts of wastewater from fracking operations are often transported or treated near waterways, increasing the risk for a spill of contaminated wastewater.

Fracking has increased the amount of natural gas production in the U.S., which is transported within North America as a gas through pipelines. However, with the increase in gas production, energy companies are looking to export some of this outside of North America as liquefied natural gas, or LNG. Several projects have been approved to export LNG, and several more are awaiting approval. LNG is currently transported by tanker, and with these new export projects, LNG tanker traffic will increase.

LNG is also being explored as a marine fuel option, which will require LNG bunkering infrastructure to supply the fuel needs of vessels that will run on LNG. Several LNG terminals and bunkering operations are in various stages of planning and development, and the presence of more vessels carrying LNG as a fuel or cargo will need to be addressed in future spill response planning.

Fracking has also led to greater amounts of crude oil produced in the U.S. Much of this new oil is being transported by rail, historically not a typical way to move lots of crude oil. This change in volume and mode of transportation for crude oil also presents risks for accidents. There have been several recent high-profile derailments of oil trains, many including fires or explosions.

The increase in crude oil transportation by rail is in large part a stopgap measure. First, because existing pipeline infrastructure isn’t available in certain parts of the country, including North Dakota and Wyoming, which are now producing crude oil. Second, because new pipelines take time to get approved and then constructed to serve new areas. Pipeline construction has increased significantly since 2008 but not without some issues.

All of this would be further complicated if the national ban on exporting crude oil (rather than refined oil) were lifted, an idea which has some supporters. This could change the amount and type of oil being transported by different modes to different locations, especially ports, and increase the risk of oil spills into nearby waterways.

Offshore wind development and LNG infrastructure were also identified as potential risks that could further complicate petroleum production and transport in the United States. These developments could increase traffic in certain areas or place additional obstacles (i.e., wind turbines) in the path of vessels carrying petroleum products, potentially increasing the risk of spills. Additionally, the decrease in Arctic sea ice is changing oil exploration opportunities and shipping routes through the Arctic, which could shift the entire petroleum shipping picture in the U.S.

After analyzing these overall trends, we turned to recommendations from previous incidents involving oil exploration and spills. There were 248 recommendations made in the post-incident reports for the Cosco Busan, Deepwater Horizon, and Shell Kulluk. Out of these 248, we identified 29 recommendations that could apply in the context of these new, overall changes in petroleum transportation. These were divided into five major categories: contingency planning, equipment and responder training, industry oversight, funding, and public outreach and education.

If you have any questions about the group, its members, our research, or would like to read any of our scoping documents, memos, or final paper, please visit our website at www.erw.comuv.com. We are happy to answer any questions.

The Emerging Risks Workgroup (ERW) is a group of four graduate students from the University of Washington working with UW faculty advisor Robert Pavia and Incident Operations Coordinator Doug Helton of NOAA's Office of Response and Restoration (OR&R). The students in the group are all part of the Environmental Management Certificate at UW's Program on the Environment. Stacey Crecy is from the School of Marine and Environmental Affairs, and Andrew Cronholm, Barry Hershly, and Marie Novak are from the Evans School of Public Affairs. The Environmental Management Certificate culminates in a two-quarter capstone project that allows the student teams to work on a project for an outside client and then present their findings.

The ERW would like to thank our sponsor NOAA OR&R, and Doug Helton. We would also like to thank our UW faculty advisor, Robert Pavia of the School of Marine and Environmental Affairs, Anne DeMelle of the Program on the Environment, and all of the people that guided our research.

The views expressed in this post reflect those of the authors and do not necessarily reflect the official views of the National Oceanic and Atmospheric Administration (NOAA) or the federal government.