OCTOBER 29, 2014 -- In the United States alone, scientific reports show at least 115 different species of marine life have gotten tangled up—literally—in the issue of marine debris. And when you look across the globe that number jumps to 200 species. Those animals affected range from marine mammals and sea turtles to sea birds, fish, and invertebrates. Sadly, a humpback whale (Megaptera novaeangliae) swimming in the blue waters off of Maui, Hawaii, got first-hand experience with this issue in February 2014. Luckily, trained responders from the Hawaiian Islands Humpback Whale National Marine Sanctuary were able to remove the long tangle of fishing rope wrapped around the whale’s head, mouth, and right pectoral fin. According to NOAA's National Marine Sanctuaries:

"A long pole with a specially designed hook knife was used by trained and permitted personnel to cut through the entanglement. Hundreds of feet of small gauge line were collected after the successful disentanglement. The entanglement was considered life threatening and the whale is confirmed to be totally free of gear."

Check out these short videos taken by the response team for a glimpse of what it’s like trying to free one of these massive marine mammals from this debris:

While this whale was fortunate enough to have some help escaping, the issue of wildlife getting tangled in marine debris is neither new nor going away. Recently, the NOAA Marine Debris Program and National Centers for Coastal Ocean Science reviewed scientific reports of ocean life entangled by marine debris in the United States. You can read the full NOAA report [PDF]. They looked at more than 170 reports reaching all the way back to 1928. However, wildlife entanglements didn’t really emerge as a larger problem until after 1950 and into the 1970s when plastic and other synthetic materials became popular. Before that time, fishing gear and "disposable" trash tended to be made out of materials that broke down in the environment, for example, hemp rope or paper bags. Nowadays, when plastic packing straps and nylon fishing ropes get lost or discarded in the ocean, they stick around for a lot longer—long enough for marine life to find and get wrapped up in them. One of the findings of the NOAA report was that seals and sea lions (part of a group known as pinnipeds) were the type of marine life most likely to become entangled in nets and other debris in the United States. Sea turtles were a close second. But why these animals? Is there something that makes them especially vulnerable to entanglement?

The two species with the highest reported numbers of entanglements were northern fur seals (Callorhinus ursinus) and Hawaiian monk seals (Monachus schauinslandi). Both of these seals may live in areas where marine debris tends to build up in higher concentrations, increasing their chances of encountering and getting tangled in it. For example, Hawaiian monk seals live among the coral reefs of the Northwestern Hawaiian Islands, where some 50 tons of old fishing gear washes up each year. These islands are near the North Pacific Subtropical Convergence Zone, where oceanic and atmospheric forces bring together not only plenty of food for marine life but also lots of debris floating in the ocean. Humpback whales migrate across these waters twice a year, which might be how the humpback near Maui ended up in a tangled mess earlier this year. 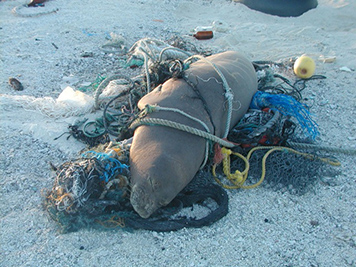 An endangered Hawaiian monk seal snuggles up on a pile of nets and other fishing gear in the Northwestern Hawaiian Islands. Between the mid-1950s and mid-1990s, the population declined to one-third of its size due at least in part to entanglement in trawl nets and other debris that drift into the Northwestern Hawaiian Islands from other areas (e.g., Alaska, Russia, Japan) and accumulates along the beaches and in lagoon reefs of atolls. (NOAA)

While being in the wrong place at the wrong time can lead to many unhappily tangled marine animals, behavior also plays into the problem. Some species exhibit particular behaviors that unknowingly put them at greater risk when marine debris shows up. Not only does the endangered Hawaiian monk seal live on shores prone to the buildup of abandoned nets and plastic trash, but the seals actually seem to enjoy a good nap or lounge on piles of old fishing gear, according to visiting scientists in the Northwestern Hawaiian Islands. The playful, curious nature of young seals and humpback whales also makes them more likely to become entangled in marine debris. Sea turtles, young and old, are another group whose behaviors evolved to help them survive in a world without human pollution but which in today's world sometimes place them in harm's way. Young sea turtles like to hide from predators under floating objects, which too often end up being marine debris. And because sea turtles enjoy munching on the food swirling around ocean convergence zones, such as the one in the North Pacific, they also munch on and get mixed up with the marine debris that gathers there too—especially items with loops and openings to get caught on. While these animals can't do much about their behaviors, we humans can. You can: 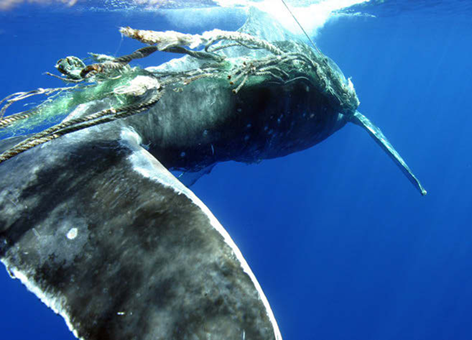 A humpback whale entangled in fishing gear swims near the ocean’s surface in 2005. (NOAA/Hawaiian Islands Humpback Whale National Marine Sanctuary)
Back to top