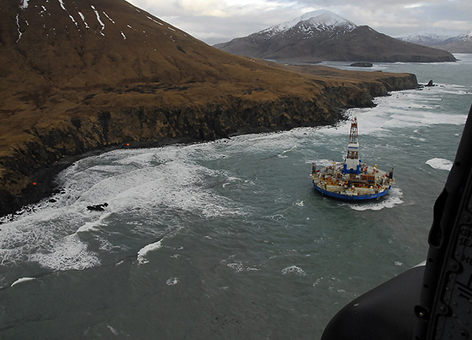 UPDATED JAN. 11, 2013 — The Kulluk was refloated at approximately 2:10 a.m. Eastern Standard Time, and the tug Aiviq successfully towed the Kulluk to nearby Kiliuda Bay, an intermediate safe harbor of Kodiak Island. Weather permitting, the U.S. Coast Guard is scheduled to perform an aerial survey at first light to look for any signs of an oil sheen from the rig. Response teams have not detected any oil discharge; both fuel tank soundings taken aboard the Kulluk and infrared equipment trained on the water around the rig as it is being towed indicate that all of the Kulluk's oil is still on board. Here is video of the rig being towed:

You can find further updates at the Unified Command's website: http://www.kullukresponse.com/. JANUARY 4, 2013 -- In the narrow window of daylight and safe weather in the Gulf of Alaska, a 12-person salvage team was able to land on the grounded Dutch Royal Shell drilling rig Kulluk on Thursday, January 3, 2013. They were able to complete their assessment of the rig, and while those results are still pending, they reported again no sightings of oil around the large conical rig.

Late on Dec. 31, 2012, during the return transit to Seattle, Wash., for winter maintenance, severe weather and heavy seas forced the Kulluk aground on Sitkalidak Island, just off the larger Alaskan island of Kodiak. NOAA's Office of Response and Restoration (OR&R) has been supporting the U.S. Coast Guard in its response to this grounding. Currently, the response's focus is on being thoroughly prepared to refloat the Kulluk and move it to a safe harbor nearby. As a result, the Unified Command has flown in significant amounts of salvage and safety gear. The salvage team's attempt to remobilize the rig will depend on having all the proper equipment in place and a window of good weather for operations. Because the Kulluk's fuel tanks holding the approximately 140,000 gallons of diesel appear protected in the interior of the rig, the salvage team is not planning to remove the oil prior to relocating the rig. At this time, NOAA has six people in the command post, based in Anchorage, Alaska:

Here is video from a Coast Guard helicopter survey of the grounded Kulluk from January 2, 2013, showing some of the rough conditions the response is forced to deal with.

For the latest updates from the Unified Command for this incident, visit https://www.piersystem.com/go/site/5507/ and https://twitter.com/KullukResponse.