UPDATED: Natural Gas Release from Wellhead off the Louisiana Coast 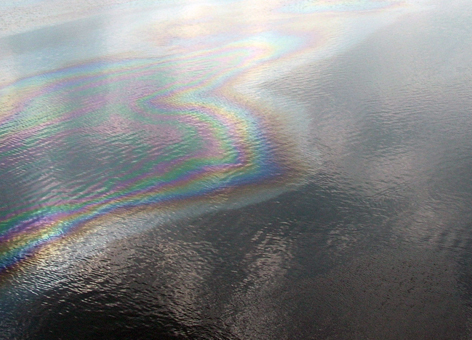 Rainbow sheen, such as the one shown here from a different incident in the Gulf of Mexico, has been spotted near the leaking natural gas well off the Louisiana coast. (NOAA)

JULY 10, 2013 -- NOAA's Office of Response and Restoration has provided a trajectory forecast in response to a release of natural gas into the Gulf of Mexico about 74 miles from Port Fourchon, La., at Ship Shoal Block 225, Platform B. The release, resulting from a loss of well control, began on July 9, when the owner of the well, Energy Resources Technology Gulf of Mexico, notified the U.S. Coast Guard and the Bureau of Safety and Environmental Enforcement (BSEE) of the accident. All workers on the natural gas and crude oil platform at the time of the accident were evacuated and unharmed. Energy Resources Technology Gulf of Mexico is a subsidiary of Talos Energy. The spill has produced a sheen that has varied in size, remaining approximately between four and five miles wide, and one to three quarters of a mile long. The well dates from the 1970s and has not been in production for more than 10 years. NOAA Scientific Support Coordinator Kyle Jellison is in communication with the responders and stated that there appears to be little threat to natural resources from an environmental standpoint at this time. See a U.S. Coast Guard news release for more information on the incident. UPDATE JULY 12, 2013: Operations to plug the leaking well appear to have been successful. Pumping heavy mud into the well created a temporary "seal" so that the well is no longer releasing natural gas or condensate. An early morning overflight on July 12 showed a light sheen, whose source is believed to be residual oil from the previous flow and runoff from the platform. NOAA is providing weather support, but no other services at this time.