U.S. Vessel, Torpedoed in 1942, was Source of Leaking Oil near North Carolina Coast

On July 15, 2014, a fisherman filed a report after observing an unknown sheen from an unknown source in ocean waters approximately 48 miles offshore of Cape Lookout, NC.

He had been in the area in his boat on July 5 and observed a rainbow sheen and “black globs” of oil rising to the surface. He also saw a black sheen on July 12 in the same vicinity, reporting also an oil "boil" and that was a rainbow sheen about 200 yards wide and one mile long.

On July 17, 2014, a U.S. Coast Guard (USCG) C-130 aircraft flew over the site and confirmed the presence of sheen in the same vicinity. Based on the location and the temporal and geographical persistence of the sheens, the oil was thought possibly to be from the sunken wreck of W.E Hutton, a 453 foot long vessel carrying 65,000 barrels of #2 heating oil that was torpedoed and sunk by a German U-Boat on March 18, 1942. This wreck is in the NOAA Response to Undersea Legacy Environmental Threats (RULET) Database and was evaluated in the 2013 NOAA report “Risk Assessment for Potentially Polluting Wrecks in U.S. Waters” and had been considered a low potential as dive surveys “shows all tanks open to the sea and no longer capable of retaining oil".

The wreck formerly identified as Papoose, but now known to be W.E Hutton, lies in approximately 125 feet of water, and has been reported to be completely capsized, upside down, with the port side buried in sand, but with the starboard edge and some of its railing visible. The wreck is described by wreck diver and historian Gary Gentile as having “enough large cracks to permit easy entry into the vast interior.” Wreck diver and historian Roderick Farb notes that the keel is reached at a depth of 85 feet, at 110 to 120 feet are many openings, but the largest point of entry into the hull is “about 150 feet from the stern” and is a “huge crack in the hull full of rubble, iron girders, twisted hull plates and other wreckage.” This wreck is the closest to the site of the leaking oil, and given the ship’s inverted position, cracks, and the possibility of the inverted hull trapping some of the 65,000 barrels of its cargo as well as its own fuel.

On July 21, a commercial dive company contracted by the USCG responded with multiple dive teams and assessed the scope and quantity of the leaking oil. The contractor developed and implemented a pollution containment and mitigation plan which stopped the flow of oil without compromising the W.E Hutton's cargo spaces.

NOAA provided scientific support to the U.S. Coast Guard, including access to historical data, survey information, and resources at risk. 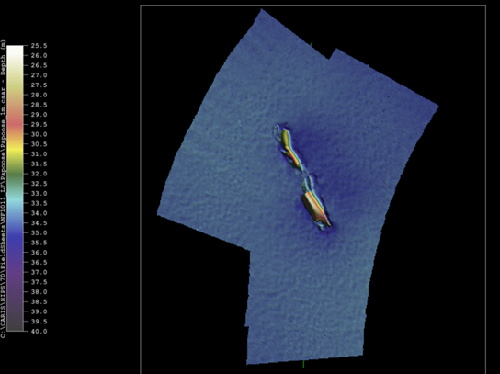 A 2010 multibeam image of the wreck.
Back to top