APRIL 13, 2016 -- Chromium, manganese, zinc. Elements like these may show up in a daily multivitamin, but when found in a certain form and concentration in water and soil, these elements can cause serious problems for fish, birds, and wildlife. As an assessor of environmental harm from pollution, Troy Baker of NOAA's Office of Response and Restoration sees this scenario being played out at hazardous waste sites around the country. Take chromium, for example, which is an element found in some multivitamins and also naturally in rocks, plants, soil, and animals (and thus at very low concentrations in meat, eggs, and cheese). At the Hanford Nuclear Reservation in eastern Washington, Baker and his colleagues are evaluating how historical discharges of chromium resulting from nuclear fuel production may have affected soils, river sediments, groundwater, and surface waters along the Columbia River bordering this property. Of particular concern is whether discharged chromium affected Chinook salmon eggs and young fishes. Hanford's nuclear reactors, first constructed as part of the top-secret Manhattan Project during World War II, required huge amounts of river water to keep the reactor's nuclear core cool, and chromium compounds were added to keep this essential equipment from corroding. A little bit of chromium in the environment is considered part of a baseline condition, but if animals and plants are exposed to elevated amounts during sensitive periods, such as when very young, they may receive harmful doses.

How Much Is Too Much?

Have you heard the saying, "the dose makes the poison?" Environmental scientist Troy Baker wanted to find out how his evaluation of what chemicals may cause harm to aquatic species at Hanford matches up to toxicity data from one of NOAA's software tools, the Chemical Aquatic Fate and Effects (CAFE) database. He already knew that chromium in surface waters at the level of parts per billion (ppb) has the potential to cause harm at Hanford, including to migratory Chinook salmon and steelhead. But what does that concentration look like? A helpful analogy from the Washington State Department of Ecology shows just how small that concentration is: One part per billion would be one kernel of corn sitting in a 45-foot high, 16-foot diameter silo.

Government scientists set standards called "injury thresholds" to indicate the pollution concentrations when harm reliably occurs to a certain species of animal or type of habitat. It's Troy Baker's job to see if he and his colleagues can trace a particular contaminant such as chromium back to a source at the Hanford Nuclear Reservation and then document whether aquatic species were exposed to that contaminant for a certain area and time period and harmed as a result. Baker is currently working with his colleagues to set injury thresholds for the amount of chromium and other harmful materials in soils, sediments, and surface waters at the Hanford Nuclear Reservation. What's different in this case is that they are evaluating what short-term harm might have occurred to fishes and other animals from either historical pollution mixtures or existing contamination in the Columbia River. To do that, they need large amounts of toxicity data for aquatic species presented in an easy-to-digest format. That's where NOAA's CAFE database comes in. 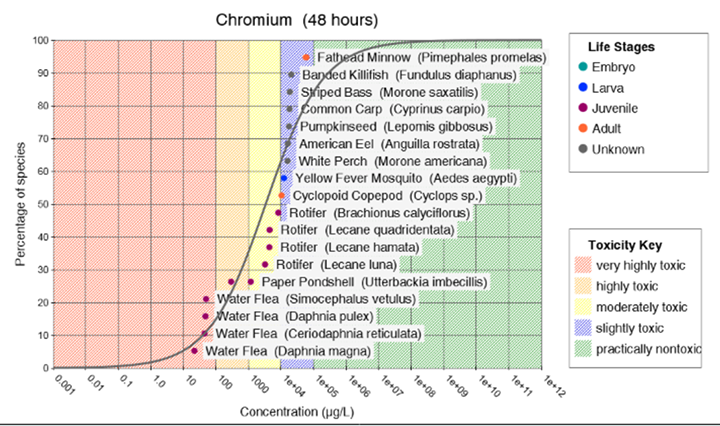 Example data output from NOAA’s CAFE database showing aquatic invertebrates as the most sensitive freshwater aquatic organism after exposure to chromium for 48 hours in laboratory tests. One microgram per liter (µg/L) is equivalent to one part per billion. (NOAA)

Using this toxicity database for aquatic species, Baker was able to generate multiple scenarios for chromium exposure to a range of freshwater fish and invertebrates found in the database. He could compare at what concentration chromium becomes toxic to these species and easily see which life stage, from egg to adult, is most affected after 24, 48, and 96 hours of exposure. The results from CAFE confirmed that setting an injury threshold for chromium somewhere within the "very highly toxic" range of exposure (less than 100 parts per billion of chromium) would be appropriate to protect a wide range of aquatic invertebrates and fish. With the help of CAFE, Baker was able to quickly double-check whether there is any scientific reason to lower or raise the injury thresholds he has been discussing with his Hanford colleagues. 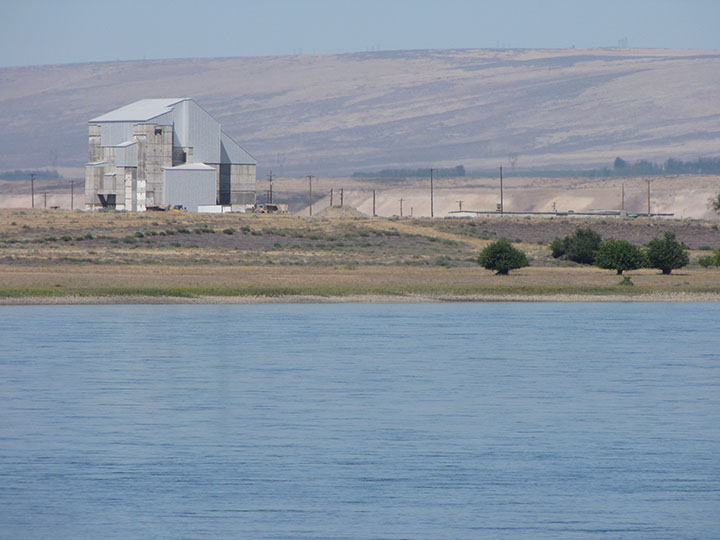 View of Cocooned H reactor at Hanford Nuclear Facility from Locke Island, Columbia River, Washington. The reactor operated for 15 years and was one of nine along the river. (NOAA)

Baker and his colleagues have a lot more environmental assessment work to do at the Hanford Nuclear Reservation. Home to nine former nuclear reactors plus processing facilities, that site is one of the nation's most complex pollution cases. Part of his work at NOAA is to collaborate with his agency and tribal colleagues through the Natural Resource Damage Assessment process to understand whether harm occurred and ultimately restore the environment in a way that's equivalent to the scale of the injuries. They are concerned about more than 40 contaminants at Hanford, but that shouldn't be a problem for CAFE. This database holds information on environmental fate and effects for about 40,000 chemicals. The next version of CAFE, due out in 2016, will be able to display information on longer-term effects of chemicals beyond 96 hours, increasing to 28 days if laboratory test data are available. Having toxicity data available for longer durations will be a huge help to Baker's work as it gets translated into decisions about environmental restoration in the future. Learn more about our environmental assessment and restoration work at the Hanford Nuclear Reservation. 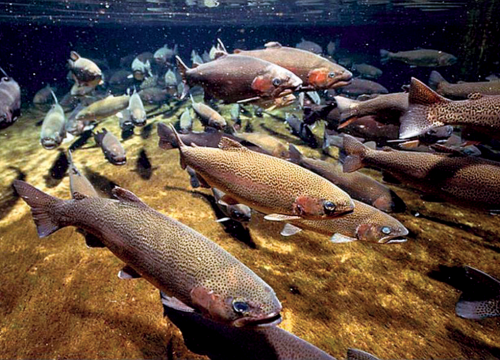 NOAA and partners are examining whether chromium released at Washington's Hanford Nuclear Reservation has affected Chinook salmon eggs and young fishes in the Columbia River. (Department of Energy)
Back to top