OCTOBER 22, 2015 -- The data whizzes at NASA recently decided to turn their attention from the sky to the ocean as they attempted to model how ocean currents help drive the formation of the "garbage patches." From NASA:

"We start with data from floating, scientific buoys that NOAA has been distributing in the oceans for the last 35 years represented here as white dots ... If we let all of the buoys go at the same time, we can observe buoy migration patterns ... The buoys migrate to 5 known gyres also called ocean garbage patches. We can also see this in a computational model of ocean currents called ECCO-2. We release particles evenly around the world and let the modeled currents carry the particles. The particles from the model also migrate to the garbage patches."

Check out their data visualization here:

As you might gather from the visualization, the gyres, where "garbage patches" are located, represent massive, dynamic areas of the ocean that are constantly moving and changing—and as a result, are also bringing trash and other marine debris with them. Rather than giant, floating islands of trash that you can see from satellites (you can't), "garbage patches" are ocean gathering places for what are mainly tiny bits of plastic dispersed throughout the water column. Still fuzzy on what the garbage patches are and are not? Check out this video from the NOAA Marine Debris Program:

And tune in to this National Ocean Service podcast to learn what we know and don't know about the garbage patches and what we can do about this ocean-sized problem: Listen to the podcast. You can also read about our own efforts to model where marine debris travels across the ocean. 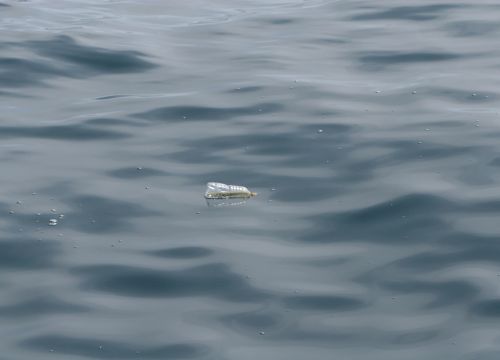 The “garbage patches” are not giant, floating islands of trash, but rather, ocean gathering places for what are mainly tiny bits of plastic dispersed throughout the water column, with some larger items as well. (NOAA)
Back to top