MAY 20, 2014 -- On the heels of Endangered Species Day, we take a look at the incredible recovery story of the Bald Eagle. This national symbol teetered on the edge of extinction in the second half of the twentieth century, in part due to impacts from people releasing the pesticide DDT into the environment. By the early 1960s Bald Eagles had disappeared from southern California's Channel Islands after chemical companies near Los Angeles discharged into the ocean hundreds of millions of pounds of the toxic chemicals DDT and PCBs. These chemicals both stay in the environment for a very long time. Once DDT worked its way up the marine food chain to the eagles, it weakened the shells of their eggs, causing the parent eagles to crush the eggs before they could hatch. However, thanks to the efforts of NOAA's Montrose Settlements Restoration Program and our partners, including the Institute for Wildlife Studies, Bald Eagles have made a comeback in southern California's Channel Islands. "This program has been 30 years in the making and after that amount of time we have finally started to see natural hatching out on the islands," says bird biologist Annie Little of the Montrose Settlements Restoration Program. "I think it shows the persistence of these types of chemicals in the environment and that restoration doesn't happen overnight." But it does happen with a lot of hard work and dedication. Learn more about this notable conservation work in this Thank You Ocean Report video podcast:

Between 2006 and 2013, a total of 81 Bald Eagle chicks have hatched in the Channel Islands. You can watch the eagles' recovery in real time as they build nests and hatch chicks on the islands via the Bald Eagle web cams. Also from Thank You Ocean, here's an everyday action you can take to protect the ocean and the animals dependent on it: "Avoid the use of toxic chemicals and keep trash and chemicals out of storm drains. Polluted water from storm drains flows into the sea and can harm marine life and the environment." 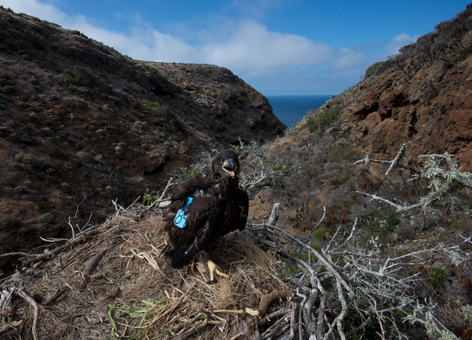 A young Bald Eagle after being banded at Fraser Point on Santa Cruz Island. Credit: Institute for Wildlife Studies 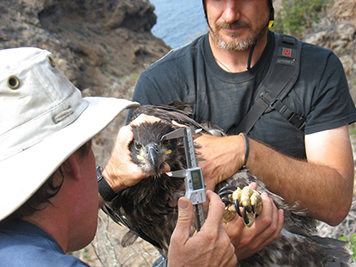 Taking measurements of young Bald Eagles during banding at Fraser Point on Santa Cruz Island. Credit: Institute for Wildlife Studies
Back to top