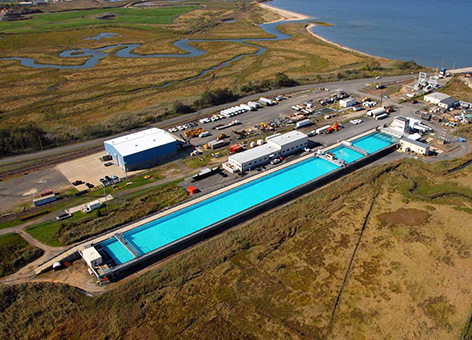 The Ohmsett facility is located at Naval Weapons Station Earle, Waterfront. The research and training facility centers around a 2.6 million-gallon saltwater tank. (Bureau of Safety and Environmental Enforcement)

JULY 18, 2013 -- Last week, OR&R Incident Operations Coordinator Doug Helton had the chance to go back to Leonardo, N.J., to observe an oil spill dispersant exercise at the National Oil Spill Response Research and Renewable Energy Test Facility known as Ohmsett (the Oil and Hazardous Material Simulated Environmental Test Tank). Ohmsett is operated by the U.S. Bureau of Safety and Environmental Enforcement (BSEE). The facility features a large saltwater test tank that allows for full-scale testing of oil spill response equipment and technologies. This tank has a large wave generator to simulate the type of conditions seen in the open ocean. Dispersant use became a national topic of discussion following the explosion and subsequent well blowout on the Deepwater Horizon drilling rig on April 20, 2010. The unprecedented use of chemical dispersants on and below the ocean’s surface during this oil spill raised scientific, public, and political questions about both their effectiveness and their potential consequences for ecosystems and marine life in the Gulf of Mexico. Although dispersants get a lot of attention, Helton has worked on hundreds of oil spills over the past 20 years, and during that time, he has only worked on a handful of spills where dispersants were used. Furthermore, he has never had a chance to observe directly how dispersants work. The Ohmsett facility provided that opportunity in a controlled setting that still simulated real-world, open ocean conditions. Here is a series of photos he took from one of the tests:

At left, freshly spilled crude oil in the Ohmsett saltwater test tank. To the right, you can see the oil changing a few minutes after dispersants were applied. Note that some of the oil is still black, but some is turning brown. 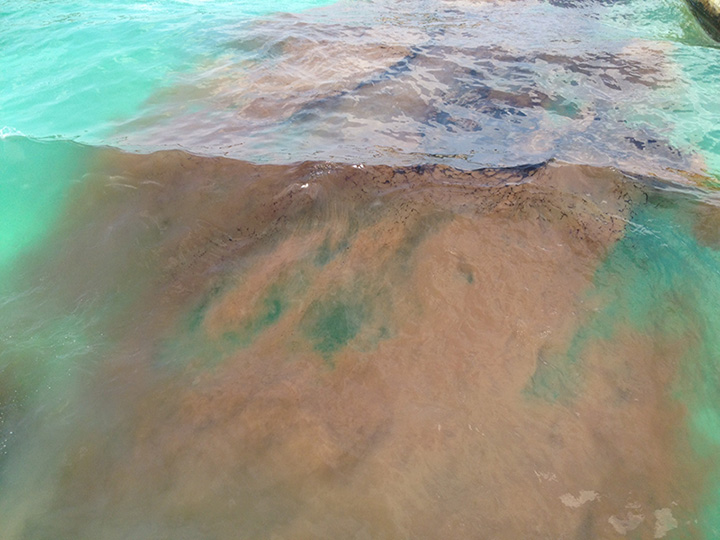 Now most of the oil is brown, and instead of being on the surface, it is now suspended in small droplets in the top couple feet of the pool. 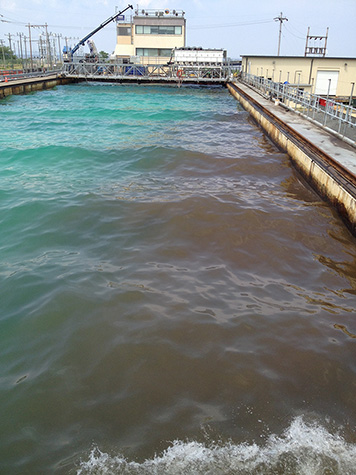 In the final image, you can see the oil is completely mixed in the water. So what do these tests demonstrate? Dispersants can be effective in removing oil from the surface of the water. Breaking the oil into tiny droplets doesn't remove oil from the water, but it does help to increase the rate of biodegradation. What these tests don't tell you is the biological effect of mixing the oil in the water, as opposed to leaving it on the sea surface. Leaving oil on the surface will increase the potential exposure to birds, mammals, and shorelines, while dispersing oil will increase exposure to fish and other animals living in the water column. The decision to use dispersants or other response strategies will always involve a careful evaluation of the environmental benefits and trade-offs of the particular situation and location. To help answer some of these trade-off questions, NOAA, in between spills, continues to study dispersants and their potential effects on the marine resources that we are trying to protect.