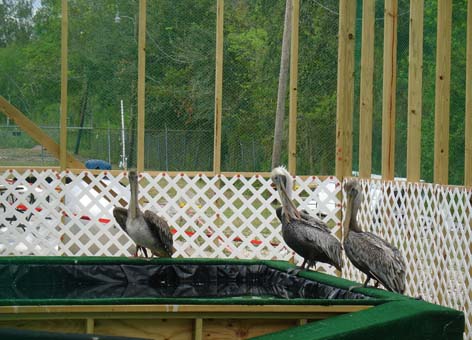 Three cleaned brown pelicans prior to being released at the wildlife rehabilitation center. (NOAA/Ed Levine)

SEPT. 18, 2012 — Even though Hurricane Isaac blew off the weather radar several weeks ago, the pollution and destruction it left behind in the Gulf of Mexico still remain.

At this time, NOAA's Office of Response and Restoration has five support personnel, consisting of Scientific Support Coordinators and information management specialists, on scene in the New Orleans command post assisting response operations for these cleanups. The incidents ranged from very small (several gallons) to medium (60,000 gallons) sized releases of oil and a wide variety of chemicals. 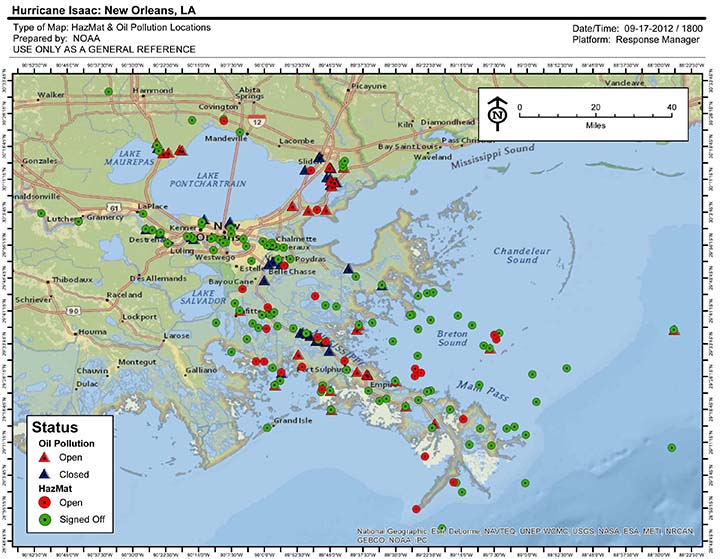 Map of locations of oil and hazardous material spills in Louisiana resulting from Hurricane Isaac, as of Sept. 17, 2012. (NOAA) 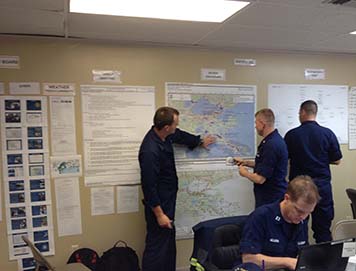 NOAA has been involved in assessing shorelines possibly affected by these spills, conducting aerial surveys of coastal waters, making cleanup recommendations, and performing final assessments of oiled areas that have been cleaned up. In addition, our experts have been coordinating the federal and state agencies involved, mapping data, and managing response information in databases.

This work is in support of the unified command, which is made up of the U.S. Coast Guard and Louisiana Oil Spill Coordinator's Office, along with several oil and chemical facilities identified as the originators of materials spilled during the hurricane.

Additionally, OR&R is collaborating with the U.S. Fish and Wildlife Service, NOAA National Marine Fisheries Service, NOAA National Weather Service, Louisiana Office of Historic Preservation, and the Louisiana Department of Wildlife and Fisheries' Scenic Rivers program to address impacts to natural resources and to determine when cleanups are complete. NOAA anticipates being on scene another week.