What Are Our Options for Restoring Lands Around Washington's Hanford Nuclear Reservation?

FEBRUARY 12, 2016 -- Many people might be inclined to write off the wide, dry plains stretching around the Hanford Nuclear Reservation as lost lands. After all, this area in eastern Washington was central to the top-secret Manhattan Project, where plutonium was produced for nuclear bombs used against Japan near the end of World War II. In addition, nuclear production continued at Hanford throughout the Cold War, ending in 1987. This history left an undeniable legacy of pollution, which is still being studied and addressed today. Yet this land and the Columbia River that curves in and around it are far from being irredeemable. The Hanford site encompasses 586 square miles. Yes, some parts of Hanford have been degraded by development from its nine (now decommissioned) nuclear reactors and associated processing plants and from chemical and radionuclide contamination. But the site also includes vast, continuous tracts of healthy arid lands that are rare in a modern reality where little of nature remains untouched by humans.

Where We Are and Where We're Going

This potential is precisely what encourages Christina Galitsky, who recently joined NOAA's Office of Response and Restoration to work on the Hanford case. Currently, she is leading a study at Hanford as part of a collaborative effort known as a Natural Resource Damage Assessment, a process which is seeking to assess and make up for the years of environmental impacts at the nuclear site. "The purpose of our study is to begin to understand habitat restoration options for Hanford," Galitsky explained. "We are starting with terrestrial habitats and will later move to the aquatic environment." NOAA is involved with eight other federal, state, and tribal organizations that make up the Hanford Natural Resource Trustee Council, which was chartered to address natural resources impacted by past and ongoing releases of hazardous substances on the Hanford Nuclear Reservation. The study, begun in the summer of 2015, will be crucial for helping to inform not only restoration approaches but also the magnitude of the environmental injury assessment. "We want to understand what habitat conditions we have at Hanford now," Galitsky said, "what restoration has been done in similar dry-climate, shrub-steppe habitats elsewhere and at Hanford; what restoration techniques would be most successful and least costly over the long term; and how to best monitor and adapt our approaches over time to ensure maximum ecological benefit far into the future." 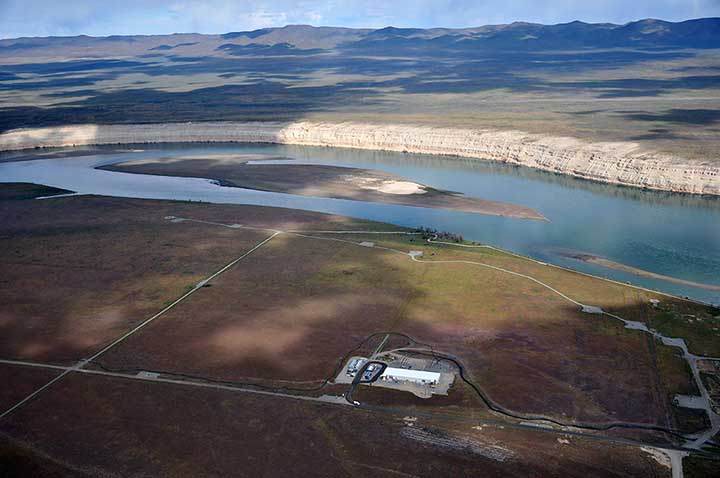 The Hanford site, which the Columbia River passes through, encompasses 586 square miles of sweeping plains alongside an atomic legacy. (Department of Energy)

The Hanford site is dominated by shrub-steppe habitat. Shrub-steppe is characterized by shrubs, such as big sagebrush, grasses, and other plants that manage to survive with extremely little rainfall. The larger Hanford site, comprised of the Hanford Reach National Monument and the central area where nuclear production occurred, contains the largest blocks of relatively intact shrub-steppe habitat that remain in the Columbia River Basin.

Galitsky's team includes experts from NOAA, the Washington Department of Fish and Wildlife, and other trustees involved in the damage assessment. For this study, they are reviewing reports, visiting reference and restoration sites in the field, creating maps, and organizing the information into a database to access and analyze it more effectively. They presented their preliminary results to the trustee council in November. So far, they are finding that limited restoration has been done at Hanford, and, as is fairly common, long-term data tracking the success of those efforts are even more limited. Over the next six months, they will expand their research to restoration of similar shrub-steppe habitats elsewhere in the Columbia Basin and beyond. Thanks to additional funding that stretches into 2017, the team will begin a second phase of the study later this year. Plans for this phase include recommending restoration and long-term habitat management approaches for the trustee council’s restoration plan and examining the benefits and drawbacks of conducting shrub-steppe restoration both on and off the Hanford site.

Steppe up to the Challenge 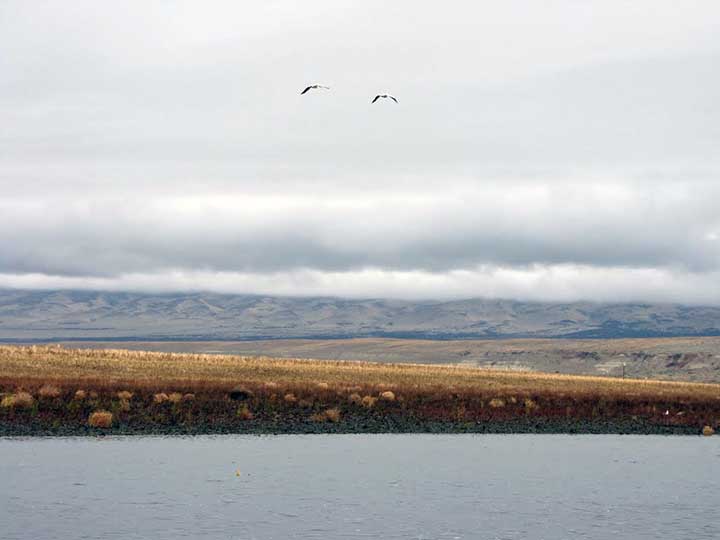 A surprising diversity of plants and animals, such as these American White Pelicans, can be found in the lands and waters of Hanford. (NOAA)

The natural areas around Hanford show exceptional diversity in a relatively small area. More than 250 bird species, 700 plant species, 2,000 insect species, and myriad reptiles, amphibians, and mammals inhabit the site. In addition, its lands are or have been home to many rare, threatened, and sensitive plants, birds, reptiles, and mammals, such as the Pygmy rabbit Furthermore, the shrub-steppe habitat at Hanford holds special significance because this habitat is so rare in the Columbia Basin. Elsewhere in the region, urban and agricultural development, invasive species, and altered fire regimes continue to threaten what remains of it. As Galitsky points out, "At Hanford there is an opportunity to restore areas of degraded shrub-steppe habitat and protect these unique resources for generations." Restoring habitats on or near the Hanford site may create benefits not only on a local level but also more broadly on a landscape scale. These efforts have the potential to increase the connectivity of the landscape, creating corridors for wildlife and plants across the larger Columbia River Basin. The team will be evaluating these potential landscape-scale effects in the second phase of this project. Stay tuned. 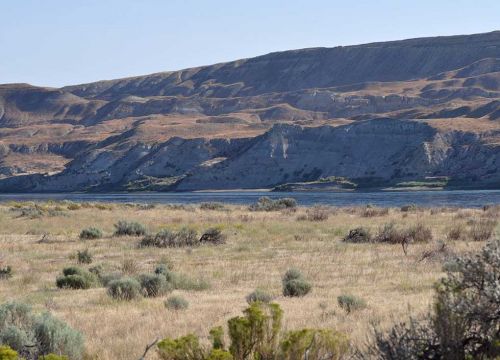 The dry shrub-steppe habitat at Washington's Hanford Nuclear Reservation is rare for the region because it is so extensive, intact, and relatively healthy. (Department of Energy) 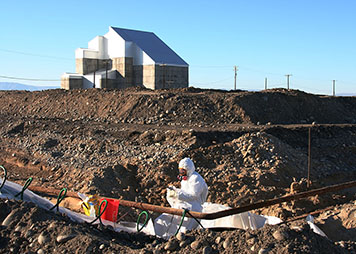 From the 1940s to 1980s, the Hanford site was used to produce plutonium in nuclear weapons, and which today is home to the largest environmental cleanup in the United States. Here, a cleanup worker deals with chromium pollution near one of the decommissioned nuclear reactors. (Department of Energy)
Back to top