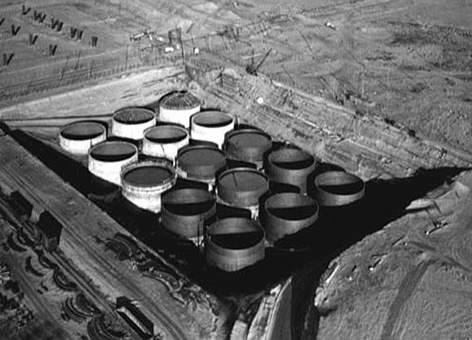 Some of the older nuclear waste storage tanks at Hanford in southeast Washington. (U.S. Department of Energy)

MARCH 29, 2013 — This past February, the U.S. Department of Energy confirmed that six additional nuclear waste storage tanks are leaking at the Hanford Nuclear Reservation in southeast Washington. This revelation has drawn attention once again to the ongoing challenges of assessing, cleaning up, and restoring the environment around a massive nuclear waste site.

To understand how these six aging nuclear waste tanks might affect salmon, the sagebrush-filled desert ecosystem, and nearby Columbia River, it helps to understand more about Hanford’s history. In 1943, the Hanford Site was developed by the U.S. Government for the production of plutonium as part of the Manhattan Project that developed atomic bombs during World War II. The site continued to produce plutonium as well as nuclear energy until the last reactor stopped operating in 1987.

The weapons production and nuclear energy operations at Hanford left dangerous and environmentally harmful solid and liquid waste, creating one of the largest and most complex cleanup projects in the U.S. That effort has been in progress since 1989. Hanford's 177 total storage tanks, some of which date from the 1940s, hold more than 50 million gallons of radioactive waste. These six leaking tanks are among 149 older “single-shell” tanks, which only have one liner. (Tanks constructed more recently feature “double-shells.”) However, these older tanks were designed for a lifespan of only about 20 years.

According to Washington Governor Jay Inslee, "This certainly raises serious questions about the integrity of all 149 single-shell tanks with radioactive liquid and sludge at Hanford.”

While tanks at the site have leaked in the past, news of these recently discovered leaks again raises concerns about the condition of the tanks and underscores the ongoing complexities of this assessment and cleanup. The six leaking tanks pose no immediate threat to natural resources because they are located 200–300 feet above the groundwater table. The State of Washington indicates that there is no immediate or near-term health risk as the leaking tanks are located more than five miles from the Columbia River. In addition, measures are being taken to prevent contamination currently in the soil from entering the river. 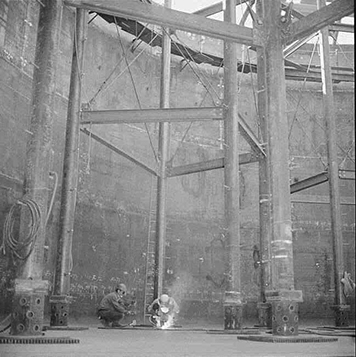 One of the older waste storage tanks under construction at the Hanford Nuclear Reservation. (U.S. Department of Energy)

While this latest discovery affects the ongoing cleanup, it does not change the focus of the Hanford Natural Resource Damage Assessment because the Hanford Natural Resource Trustee Council is already evaluating harm from contamination flowing into the Columbia River, which borders the site and is home to Chinook salmon and sturgeon. The council includes representatives from NOAA, three tribal organizations, the States of Washington and Oregon, and two other federal agencies. It is tasked with characterizing the cumulative impacts from decades of releases and contamination to the fish, wildlife, and the habitats they rely upon, and determining the cumulative restoration needed to replace, restore, and offset the total decades of damage.

Discovery of the additional leaking tanks illustrates the challenge of that task: to be able to measure the harm over time, even as new sources of contamination are discovered and await cleanup. Each source can add to the cumulative impact and ultimately to the amount of restoration that will eventually be needed to offset damages. For more information about the work of the Hanford Natural Resource Trustee Council, view the Hanford Natural Resource Damage Assessment Injury Assessment Plan, which describes how the council will characterize and quantify the past, ongoing, and future environmental impacts.