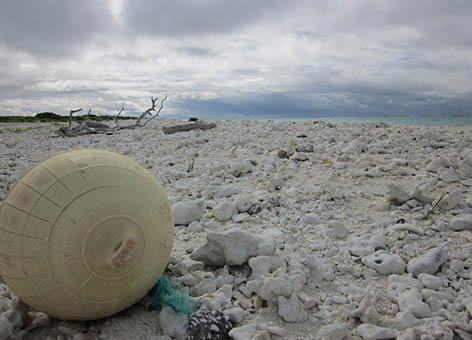 During a recent trip to Midway Atoll in the Northwestern Hawaiian Islands, NOAA Marine Debris Program staff, in partnership with the Papahānaumokuākea Marine National Monument, examined the beaches for significant or unusual marine debris items, which may be related to the Japan tsunami. None were found. (NOAA Marine Debris Program/Carey Morishige)

AUG. 7, 2012 — Ever since the first few items—an unmanned fishing boat, a childhood soccer ball—from the 2011 Japan earthquake and tsunami began turning up in North America, people have been asking what they should do if they find something themselves. If you see small, disposable debris, such as bottles, aluminum, or Styrofoam, remove it from the beach and recycle or dispose of it properly. If you suspect that the marine debris you found may be from the Japan tsunami (which is very difficult to tell), let us know! Email DisasterDebris@noaa.gov to report it to the NOAA Marine Debris Program, with as much information as possible.

You can view a NOAA map (generated using our nifty ERMA® tool) of all of the debris possibly related to the tsunami reported to NOAA since December 2011. This includes both potential and confirmed tsunami marine debris sightings, and we provide close-up maps for each of the Pacific coast states as well. However, out of hundreds of sightings, only 10 have confirmed connections to the Japan tsunami. Some pieces of marine debris may be too big (for example, a 66 foot long concrete dock) or too hazardous to handle. In this case, leave the debris alone (it could be a safety risk) and report it to the local authorities, depending on where you live.

If you are in Oregon, you can find dozens of designated disposal stations along Oregon beaches where you can drop off bags of tsunami debris. And, the state of Oregon says, "If you see debris larger than what you can put in a bag—tires, refrigerators, and so on—don't bring it to the disposal station. Report its location by calling 211 (1-800-SAFENET)." For Washington residents, you can call 1-800-OILS-911 (or 1-800-645-7911) to report oil, hazardous items, floating debris items that might pose a boating or navigation hazard to the National Response Center and Washington Department of Ecology. They will also give instructions for reporting debris that is not large or hazardous.

If an item you find appears to have sentimental value to its previous owner, we ask that you move the item to a safe place and email us details at DisasterDebris@noaa.gov. The NOAA Marine Debris Program website has a full set of guidelines for how to handle different types of debris. And the Oregon Parks and Recreation Department has a similar handy pocket guide [PDF] for when you may be combing the beach for debris.