What Do We Know About Transporting Oil Sands in the United States? 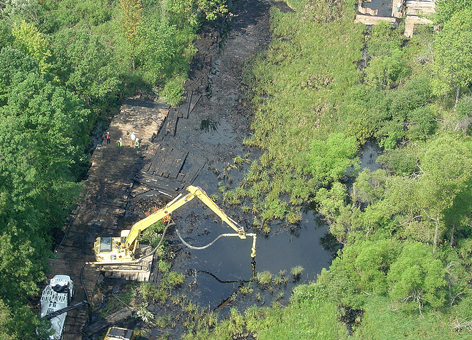 APRIL 23, 2013 — Over the past 6 months, our research team has been gathering data and interpreting information to help NOAA's Office and Response and Restoration (OR&R) better prepare for a potential spill of Canadian oil sands product in U.S. waters. (Oil sands are also known as tar sands.)

Our research has sought to provide OR&R, whose experts offer scientific support in case of a marine or coastal oil spill, with:

In doing so, we have worked to answer some key research questions, which we developed with the OR&R and other stakeholders (e.g., Washington State Department of Ecology), including:

Our research took us into the technical depths of petroleum chemistry, state-of-the-art oil spill response technology, federal and state regulations, human and environmental health implications, and several types of transportation networks. From early on, it was clear to us just what a complex and far-reaching issue oils sands development really is. In some cases, trying to find answers just led to more questions. Although there are still many things we don’t know for sure and further research is needed, we ultimately were able to get closer to understanding the unique risks and challenges oils sands products pose to pollution responders and the environments they work to protect.

That’s a tall order, and unlikely to happen overnight. But there is some good news. Locally in Washington state, the Washington State Department of Ecology and U.S. Coast Guard in Sector Puget Sound have been pioneers. They are already working to improve their ability to prevent, plan for, and respond to an oil sands product spill. Last December, a conference in Portland, Maine, brought experts together from across the U.S. and Canada to discuss oil sands, and a similar conference recently was held in Seattle on April 16.

Stakeholders and policy makers we spoke with on both coasts, in the Great Lakes region, and in Canada have all begun to consider how increased oil sands development affects their region or function. Oil sands slowly are beginning to appear with greater prominence on the agenda for decision makers, not just for a particular state or project, but as an issue that spans political and geographic boundaries. If oil sands development and transportation continues to receive more and more attention, we hope it will also receive the oversight and response resources necessary to address sufficiently the risks that come with it.