What Happens When Oil Spills Meet Massive Islands of Seaweed?

OCTOBER 16, 2015 -- The young loggerhead sea turtle, its ridged shell only a few inches across, is perched calmly among the floating islands of large brown seaweed, known as sargassum. Open ocean stretches for miles around these large free-floating seaweed mats where myriad creatures make their home. Suddenly, a shadow passes overhead. A hungry seabird? Taking no chances, the small sea turtle dips beneath the ocean surface. It dives through the yellow-brown sargassum with its tangle of branches and bladders filled with air, keeping everything afloat.

This little turtle isn't alone in seeking safety and food in these buoyant mazes of seaweed. Perhaps nowhere is this more obvious than a dynamic stretch of the Atlantic Ocean off the East Coast of North America named for this seaweed: the Sargasso Sea. Sargassum is also an important part of the Gulf of Mexico, which contains the second most productive sargassum ecosystem in the world. Some shrimp, crabs, and fish are specially suited to life in sargassum. Certain species of eel, fish, and shark spawn there. Each year, humpback whales, tuna, and seabirds migrate across these fruitful waters, taking advantage of the gathering of life that occurs where ocean currents converge. 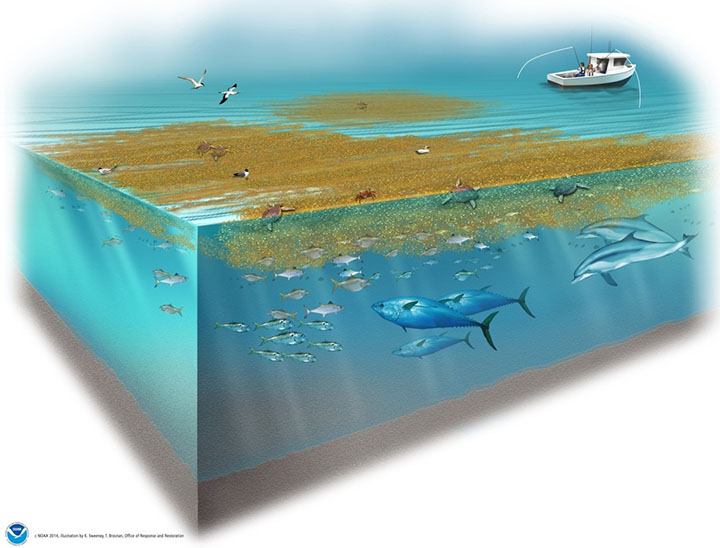 Illustration of sargassum and associated marine life, including fish, sea turtles, birds, and marine mammals. Sargassum is a brown algae that forms a unique and highly productive floating ecosystem on the surface of the open ocean. (NOAA) Click to enlarge.

The Wide and Oily Sargasso Sea

However, an abundance of marine life isn't the only other thing that can accumulate with these large patches of sargassum. Spilled oil, carried by currents, can also end up swirling among the seaweed. If an oil spill made its way somewhere like the Sargasso Sea, a young sea turtle would encounter a much different scene. As the ocean currents brought the spill into contact with sargassum, oil would coat those same snarled branches and bladders of the seaweed. The turtles and other marine life living within and near the oiled sargassum would come into contact with the oil too, as they dove, swam, and rested among the floating mats. That oil can be inhaled as vapors, be swallowed or consumed with food, and foul feathers, skin, scales, shell, and fur, which in turn smothers, suffocates, or strips the animal of its ability to stay insulated. The effects can be toxic and deadly. 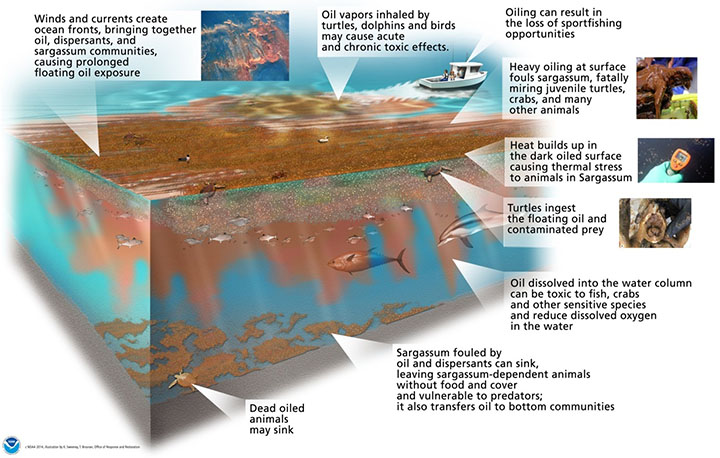 Illustration of the potential impacts of an oil spill on sargassum and associated marine life in the water column. (NOAA) Click to enlarge.

While sea turtles, for example, as cold-blooded reptiles, may enjoy the relatively warmer waters of sargassum islands, a hot sun beating down on an oiled ocean surface can raise water temperatures to extreme levels. What starts as soothing can soon become stressful. Depending on how much oil arrived, the sargassum would grow less, or not at all, or even die. These floating seaweed oases begin shrinking. Where will young sea turtles take cover as they cross the unforgiving open ocean? As life in the sargassum starts to perish, it may drop to the ocean bottom, potentially bringing oil and the toxic effects with it. Microbes in the water may munch on the oil and decompose the dead marine life, but this can lead to ocean oxygen dropping to critical levels and causing further harm in the area.

From Pollution to Protection 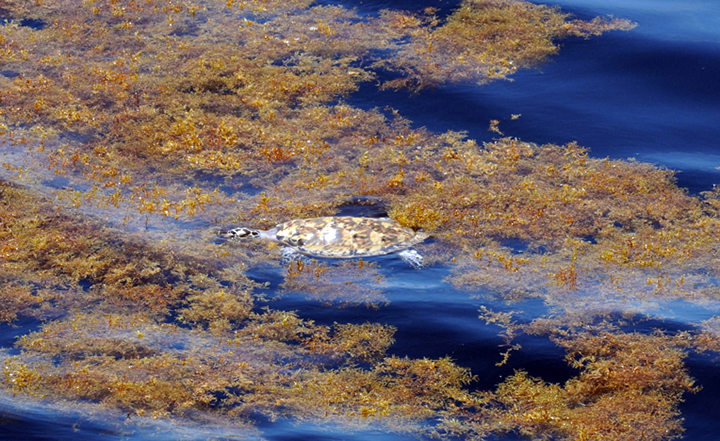 The floating habitat that sargassum creates provides food, refuge, and breeding grounds for an array of marine species, including sea turtles. (NOAA)

Sargassum and its inhabitants are particularly vulnerable to threats such as oil spills and marine debris due to the fact that ocean currents naturally tend to concentrate all of these things together in the same places. In turn, this concentrating effect can lead to marine life being exposed to oil and other pollutants for more extended periods of time and perhaps greater impacts. However, protecting sargassum habitat isn't impossible and it isn't out of reach for most people. Some of the same things you might do to lower your impact on the planet—using less plastic, reducing your demand for oil, properly disposing of trash, discussing these issues with elected officials—can lead to fewer oil spills and less trash turning these magnificent islands of sargassum into floating islands of pollution. And maybe protect a baby sea turtle or two along the way. 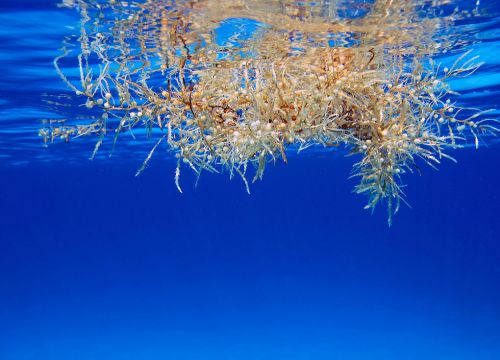 Floating rafts of sargassum, a large brown seaweed, can stretch for miles across the ocean. (Credit: Sean Nash/Creative Commons Attribution-NonCommercial-ShareAlike 2.0 Generic license)
Back to top