What Have We Done for Endangered Species Lately? 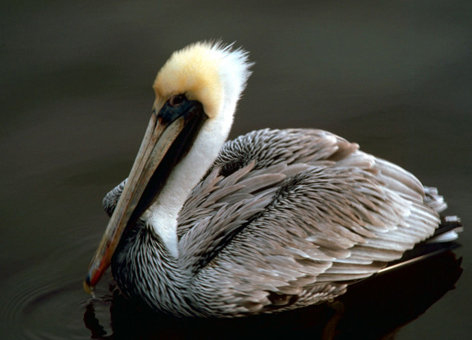 The brown pelican, a successfully recovered species, was removed from the Endangered Species List in 2009. (U.S. Fish and Wildlife Service)

MAY 16, 2014 -- Endangered species have a tough time of it. These plants and animals have been trampled, hunted, contaminated, and pushed out of their homes by humans to the point that their very existence on this planet becomes dangerously uncertain.

In the United States, this is when the federal government steps in to list a species as threatened or endangered under the 1973 Endangered Species Act.

Over 40 years later, this critical piece of legislation has had many successes in protecting native animals and plants and the natural areas where they live—perhaps most notably bringing back the national symbol, the bald eagle, from the brink of extinction. Yet with more than 1,500 types of animals and plants remaining threatened or endangered in the United States, we still have more work to do.

On May 16, 2014, we're going to take the time to recognize this very important national conservation effort by celebrating Endangered Species Day and the many ways, big and small, each of us can help save our nation's incredible array of plants and animals from extinction—like the now-recovered brown pelican!

So, what has NOAA been doing for endangered species? One example is the Office of Response and Restoration’s special data mapping tools that come into play during oil spills.

When an oil spill occurs along the coast, one priority for our office is identifying whether any threatened or endangered species live in the area near the spill. The responders dealing with the spill have to take into account factors such as what time of year these protected species are breeding or how they might come into contact with spilled oil or the response. This means knowing whether young Chinook salmon may be migrating out to sea through an estuary where a ship may have accidentally discharged fuel. Or knowing if the beaches where spill responders need to clean up oil are also important nesting grounds for a shorebird such as the piping plover.

Our biologists and ecologists help provide this kind of information during an oil spill response, but our office also produces tools to organize and display all of this information for both NOAA and oil spill planners and responders outside our agency. One of these tools is NOAA's Environmental Sensitivity Index (ESI) maps. These maps characterize coastal environments and wildlife based on their sensitivity to spilled oil. The main components of these maps are sensitive wildlife, shoreline habitats, and the resources people use there, such as a fishery or recreational beach.

A related Geographic Information Systems (GIS) tool, the Threatened and Endangered Species Geodatabases, make up a subset of the original ESI data from our maps. These data focus on the coastal species and habitats that are federally and/or state listed as endangered, threatened, protected, or as a species of concern. These databases offer a more user-friendly option to access some of the most critical biological information for a region.

In the example below, you see a map of Great South Bay from the Long Island ESI atlas. The colored shapes (red, blue, green, and maroon) indicate where the piping plover, shortnose sturgeon, eastern mud turtle, and seabeach amaranth occur in June. 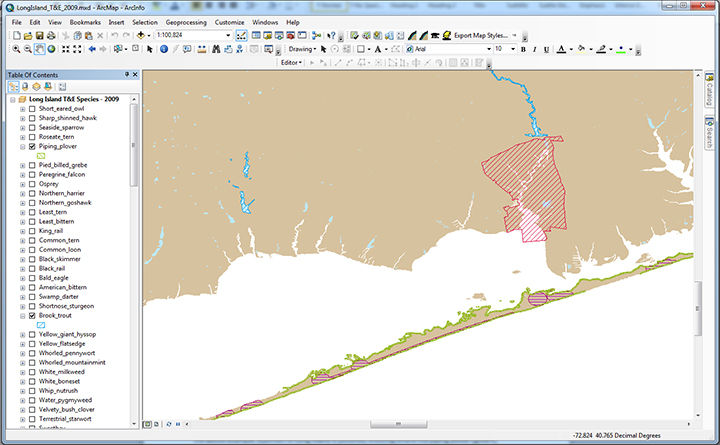 Habitat of some threatened and endangered species, indicated by the blue, red, maroon, and green coloration, found in the Great South Bay of Long Island Sound, New York. (NOAA) Click to enlarge.

Using the Threatened and Endangered Species Geodatabases allows oil spill planners and responders to easily gather complex information for a region, such as groupings of species with similar habitat preferences and feeding styles, threatened and endangered status, concentration, and life history summaries. This tool also features the ability to search for presence of a species in a particular month or season. You can take a look at these data, pulled from our many state and federal partners, for anywhere in the United States using this online map application.

What You Can Do

If you're not an oil spill planner or responder, how can you help protect endangered species? Learn what you can do, such as protecting habitat by planting native rather than invasive plants in your yard, in this podcast from the U.S. Fish and Wildlife Service. Or find an Endangered Species Day event this weekend near you.