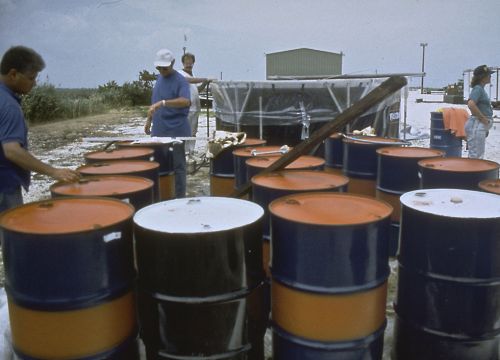 Most people don’t want to spill oil onto beaches. But after the disastrous 1989 Exxon Valdez spill covered the remote, rocky beaches of Alaska’s Prince William Sound with crude oil, Al Venosa was itching to do exactly that.

As an environmental scientist with the U.S. Environmental Protection Agency (EPA), Venosa had been called up to Alaska to help study the Exxon Valdez oil spill and its cleanup. In particular, he was interested in an oil spill cleanup technique that was getting a lot of attention at the time—an approach known as “bioremediation.” It involved adding oil-eating microbes and extra nutrients to an oiled beach to accelerate the natural background process of microbes breaking down, or biodegrading, oil.

But Venosa wasn’t satisfied with the research attempts that came out of that spill. He wanted to set up a more scientifically rigorous and controlled study of how effective bioremediation was under realistic conditions in the marine environment. However, in the United States, getting permission to spill oil into the environment on purpose is a very difficult, and nearly impossible, thing to do. 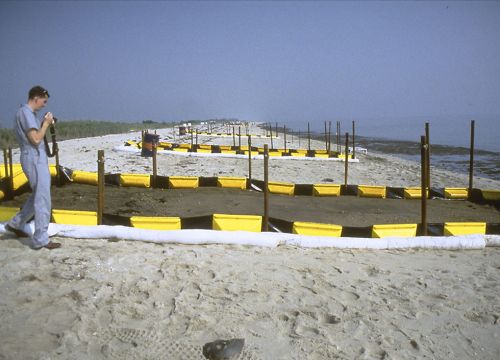 Meanwhile, Ben Anderson, an oil spill biologist with the Delaware Department of Natural Resources and Environmental Control, had also been working on the cleanup after the Exxon Valdez oil spill. Just a couple months after that iconic spill and shortly after he returned home from Alaska, he had to deal with a spill of hundreds of thousands of gallons of bunker oil when the T/V Presidente Rivera ran aground in the Delaware River. He remembered 1989 as a tough year for oil spills. Anderson began wondering how to improve the efficiency of oil spill cleanup and better protect Delaware’s abundant natural resources.

A few years later, in 1993, Anderson was listening to Ken Lee from Fisheries and Oceans Canada as he presented on bioremediation at the International Oil Spill Conference. At the end of his presentation, Lee mentioned how important—and difficult—it was to do controlled field studies on bioremediation. The comment got Anderson thinking; maybe he could help make this happen in Delaware. “Anything we can do to improve the aftermath of an oil spill in Delaware,” recalled Anderson.

After the presentation, he approached Lee, who introduced him to Al Venosa. The pair decided to work together to bring Venosa’s meticulous research approach to a study of oil bioremediation on Delaware’s beaches.

“From that time to next summer, I worked on getting a permit with EPA and with the state,” said Anderson. He and his collaborators also reached out to local environmental groups in Delaware and to NOAA, U.S. Fish and Wildlife Service, and other agencies to build support for the research project, building in as many safeguards as possible to limit any potential environmental impacts.

One issue the research team would have to work around was the fact that each May, Delaware’s sandy shores are crawling with horseshoe crabs, a prehistoric marine creature with armor and a long, pointy tail, which comes ashore to lay its eggs. More than 20 species of birds, as they migrate north to nest in the Arctic each summer, stop along these shores to nourish themselves with a feast of horseshoe crab eggs. To avoid interfering with this ecological phenomenon, Anderson and Venosa would have to start the experiment after horseshoe crab spawning season had passed.

With just a few days left before the experiment was to begin on July 1, 1994 and with Venosa and his colleagues at EPA and the University of Cincinnati already on the road from Ohio to Delaware, Anderson finally secured the needed permit. Permissions in hand, the researchers set up the experiment very carefully. Unlike previous studies, they focused intensely on replication and randomization. They cordoned off five separate blocks of sandy beach on Delaware Bay, so that each block was parallel to the ocean yet would still be within reach of the tides.

Within each block, they randomly assigned three oil treatment plots and one control plot, which was sprayed with only seawater. Plots undergoing the three oil treatments, after having weathered crude oil applied at the very beginning, were sprayed daily at low tide with seawater and nutrients (nitrogen and phosphorus), nutrients and oil-eating microbes, or nothing extra (essentially, only oil had been applied). This meant that each treatment and control was replicated five times, reducing the chance that human error or natural variation would skew the results.

“We grew up our microorganisms on the beach in 55 gallon drums using the same seawater, nutrients, and microorganism [species],” recounted Venosa, who served as the lead researcher for the study. “We added them back onto these plots every week, continuously growing and adding them. These [microbes] were adapted to the oil we used and to the climatic conditions at the site.”

As a precaution, the research team strung oil containment boom along the waters surrounding the experimental plots to catch any oil runoff. In addition, they lined up cages of filter-feeding oysters in the surf off of each study block, as well as farther up and down the shoreline, to act as natural oil monitors. NOAA ecologist Alan Mearns helped facilitate this monitoring and multiple toxicity studies to determine the potential toxicity of the various treatments over time.

Bioremediation for the Birds?

Fourteen weeks later, what did they find? According to one of the study write-ups published at the 1997 International Oil Spill Conference, the researchers found that: “oil was lost naturally because of both physical and chemical processes and biodegradation, that degradation of oil alkanes and PAHs [polycyclic aromatic hydrocarbons] in upper intertidal sandy sediments could be enhanced with the continuous addition of dissolved nutrients, that treatment with oil-degrading bacteria provided no additional benefit, and that treatment neither enhanced nor reduced the toxicity of the oil.”

While the team did detect a boost in how quickly oil broke down in plots sprayed with nutrients (which fed naturally occurring microbes), it was a pretty minor benefit in the big picture of oil spill cleanup. And adding more microbes didn’t increase the rate of oil breakdown at all.

Delaware Bay’s waters are already rich with nutrients—and oil-eating microbes. “It was probably a lot of runoff from fertilizer from agriculture and wastewater treatment plants,” speculated Venosa. “We had a two to three times increase in the rate of biodegradation.” However, for an area like Delaware Bay with high background levels of nutrients, Venosa wouldn’t recommend going to the trouble and cost of using bioremediation techniques, unless a spill happened right before something like the annual horseshoe crab spawning and bird migration.

“What we found was you don’t have to do any more nutrient addition,” said Anderson. “Just keep adding ambient water and keep it aerated to get the [biodegradation] benefit. Let nature take its course, but give it a little hand by keeping it wet on the beach face.”

Overall, the research team considered the experiment a success. They finally had hard data, meticulously gathered, that showed bioremediation to be a “polishing technique,” to be potentially used in oil spills when the local conditions were right and only after other, quicker-acting cleanup methods had been applied first. If an area showed high local levels of nutrients and oil-degrading microbes, bioremediation likely wouldn’t be very effective.

“I was expecting more of a quantifiable effect in biodegradation, but I didn’t realize the nutrients were going to be relatively high in the background,” reflected Venosa. “I was expecting to see somewhat similar increases in the field as in the lab. In the laboratory, it’s different because your controls don’t have any nutrients, so whenever you add nutrients that are in excess of what they need to grow, you’ll see huge increases.”

As a result of this and subsequent studies in Canada, the EPA released guidance documents on implementing bioremediation methods in different environments, such as marine shorelines, freshwater wetlands, [PDF] and salt marshes.

These days, however, bioremediation is starting to mean more than just adding microbes or nutrients, and now includes a range of other products meant to stimulate oil-degrading activity. How well do they work? More research is needed. But not since 1994 on the shores of Delaware Bay has the United States seen another field experiment that has intentionally released oil into the environment to find out. That summer was a unique opportunity for oil spill scientists to learn, as rigorously and realistically as possible, how well a certain cleanup method could work on an oil spill. For more information read: