What Was the Fate of Lake Erie's Leaking Shipwreck, the Argo?

DECEMBER 10, 2015 -- At the end of October, we reported that our oil spill experts were helping the U.S. Coast Guard with a spill coming from the tank barge Argo in Lake Erie. The unusual twist in this case was that the leaking Argo was located at the bottom of the lake under approximately 40 feet of water. Nearly 80 years earlier, on October 20, 1937, this ship had foundered in a storm and sank in western Lake Erie. At this point, the pollution response for the Argo is wrapping up, and we have more information about this shipwreck and the fate of its cargo. For example, we knew that originally this ship was loaded with thousands of barrels of crude oil and benzol (an old commercial name for the chemical benzene), but after decades of sitting underwater, were the eight tanks holding them still intact? How much of the oil and chemical cargo was still inside them? What exactly was causing the discolored slicks on the lake surface? What was the threat to people and the environment from this pollution?

In Less Than Ship-Shape

Based on our previous work with NOAA's Remediation of Underwater Legacy Environmental Threats (RULET) project, we had identified the Argo as a potential pollution threat in 2013. It was one of five potentially polluting wrecks identified in the Great Lakes. However, the exact location of the wreck was unknown, and the barge was thought to be on the Canadian side of the lake. But in September 2015, the Cleveland Underwater Explorers located the vessel, which was confirmed to be in U.S. waters of Lake Erie and appeared from side-scan sonar survey imagery to be intact. Divers commissioned by the Coast Guard surveyed the wreck in October and found its eight cargo tanks were intact. Yet they also observed something slowly leaking from a small rivet hole in the vessel’s structure. After sampling the leaking material, we now know that it was primarily benzene with traces of a light petroleum product.

From late October through early December, we had a NOAA Scientific Support Coordinator and support team working with the Coast Guard’s response in Toledo, Ohio. One of our primary functions was advising the Coast Guard on chemical hazards (e.g., benzene is known to cause cancer). For example, we were modeling where the chemicals would travel through the air and across the water surface if a sizable release were to occur during the wreck's salvage operations. Responders finished lightering operations, which removed all remaining chemicals and oil from the barge to another vessel, on December 1. Based on sampling, we believe any residual chemical traces in the sediment surrounding the wreck will continue to break down naturally and do not pose a threat to people or aquatic life in the vicinity of the wreck. Over the course of the response, NOAA provided almost 30 trajectory forecasts for surface slicks, daily weather forecasts, and data management support via our online response mapping application, ERMA, which displayed NOAA charts and weather, NOAA and Canadian spill trajectories, spill modeling and aerial survey information, spill response plans, and data for environmentally sensitive habitats and species in the area. NOAA, along with state and federal partners, also managed the development of environmental monitoring, water sampling, sediment sampling, and waste disposal plans for the Argo's response. In addition, the NOAA Great Lakes Environmental Research Laboratory provided science and logistical support and the NOAA Office of National Marine Sanctuaries provided key historical and archival research on the vessel and cargo. 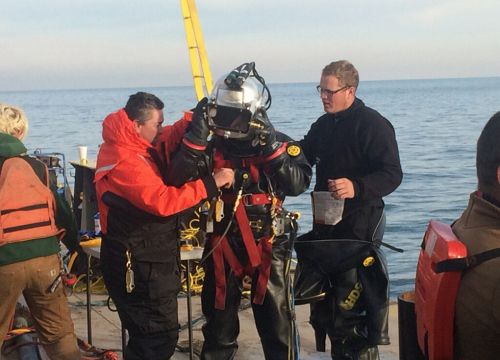 A diver, wearing a positive pressure dive suit, is inspected by his coworkers prior to conducting dive operations for the Argo response in Lake Erie, Nov. 24, 2015. Divers conducting operations during the Argo response are required to wear specialized dive suits designed for the utmost safety to the diver while ensuring flexibility, ease of decontamination, and chemical resistance. (U.S. Coast Guard) 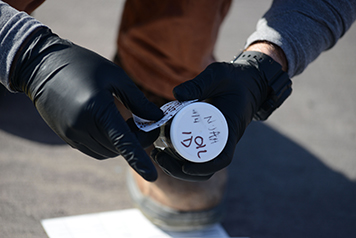 A responder labels a sample of product for analysis extracted from the Lake Erie Barge Argo Nov. 11, 2015. NOAA was involved in coordinating environmental sampling and analysis of the leaking chemicals coming from this 1937 shipwreck. (U.S. Coast Guard)
Back to top