What we do to Help Endangered Species 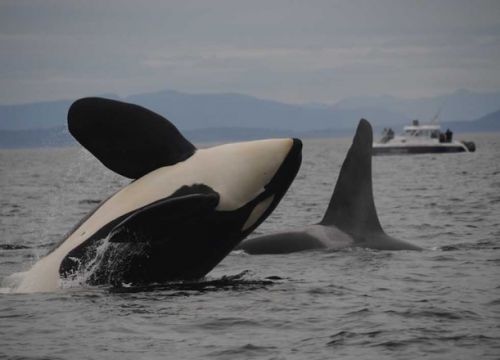 NOAA developed an oil spill response plan for killer whales that includes three main techniques to deploy quickly to keep these endangered animals away from a spill. Image credit: NOAA

May 19, 2017 - For over 40 years, the 1973 Endangered Species Act has helped protect native plants and animals and the habitats where they live. Many government agencies play a role in that important work. That's one reason the United States celebrates Endangered Species Day every year in May.

The Office of Response and Restoration contributes to the efforts to protect these species in our Emergency Response Division and assessment and restoration work.

When a spill occurs in coastal waters one priority for our emergency responders is identifying any threatened or endangered species living in the area near the spill.

At every spill or chemical release, our scientists need to take into account:

We assist the U.S. Coast Guard with a required Endangered Species Act consultation for spills to ensure those species are considered in any response action taken. We’ve also developed tools that can be used by all emergency responders and environmental resource managers to help protected endangered plants, animals, and their habitats.

Environmental Sensitivity Index maps identify coastal habitats and locations that may be especially vulnerable to an oil spills. The main components of these maps are sensitive wildlife, shoreline habitats, and the economic resources people use there, such as a fishery or recreational beach.

Threatened and Endangered Species Geodatabases allows oil spill planners and responders to easily access data on federal or state listed threatened and endangered species for specific regions. These data are a subset of the larger, more complex environmental sensitivity index data and are a convenient way to access some of the more critical biological information for an area.

Environmental Response Management Application, called ERMA ®, is our online mapping tool that integrates static and real-time environmental data and allows users to investigate data in their area. There are hundreds of publicly available base layers including many endangered and threatened species. Environmental Sensitivity Index maps are available in this tool.

Marine debris affects endangered and threatened species including species of sea turtles, whales, seals, and corals. These fragile populations face a variety of stressors in the ocean including people, derelict fishing gear, trash, and other debris. To learn more about the dangers of marine debris on marine life check out this blog post. or visit the NOAA Marine Debris Program website. For more information on threatened and endangered species, and local events for Endangered Species Day, visit U.S. Fish and Wildlife Service.