This is a post by the Office of Response and Restoration's Valerie Chu. JANUARY 4, 2015 -- I was standing on a sandy Costa Rican beach in the dark of night when I received a hard lesson in the challenges of saving an endangered species. It was my first night volunteering during a seven-day stint on a sea turtle conservation project with the Asociación de Voluntarios para el Servicio en Áreas Protegidas (ASVO) in Montezuma, Costa Rica. I was charged with protecting sea turtle nests in the ASVO hatchery from poachers and hungry wildlife. On the night of my very first shift, I discovered something terrible had happened. A net covering one of the sea turtle nests had been taken off, and when I looked inside, I found the remains of eight dead baby turtles with just their heads bitten off. When I looked in the back of the hatchery, I noticed that some eggs also had been dug up and eaten. It was heartbreaking, but furthered my resolve to protect these vulnerable turtles. Later that night, I discovered who the culprits were—two raccoons. Throughout my shift, the two raccoons would sneak back and I would scare them away each time. Fortunately, the raccoons did not come back in the following days. I was grateful I could play a small part in giving young sea turtles a head start in a long and dangerous journey.

Ever since I graduated from the University of Washington in 2012, I've wanted to make a positive impact on the dwindling populations of endangered species around the world. I started by volunteering to help orphaned and injured wildlife at the PAWS Wildlife Center near Seattle, Washington (where I recently volunteered during a vegetable oil spill). As I've worked with these animals, my desire of making a global impact on wildlife conservation has increased more and more. In December 2015, I finally got my chance to do it when I traveled to Costa Rica to volunteer with ASVO. ASVO's primary goal is to promote active conservation in protected areas, beaches, and rural communities of Costa Rica. They have a volunteer program in around 20 different areas of the country, staffed by some 2,300 volunteers, comprising both local and international volunteers from around the world.

I was working with Olive Ridley sea turtles, a vulnerable species likely to become endangered in the foreseeable future. Their main threats to survival are direct harvest of adults and eggs, incidental capture in commercial fisheries, loss of nesting habitat, and predators. During nesting season in Costa Rica, people with ASVO patrol the beaches for female turtles laying their eggs and then gather the eggs and place them at a hatchery. This way, the eggs are protected from poachers, predators, and other threats, both human and environmental. The eggs incubate in the hatchery for between 52 and 58 days before hatching. 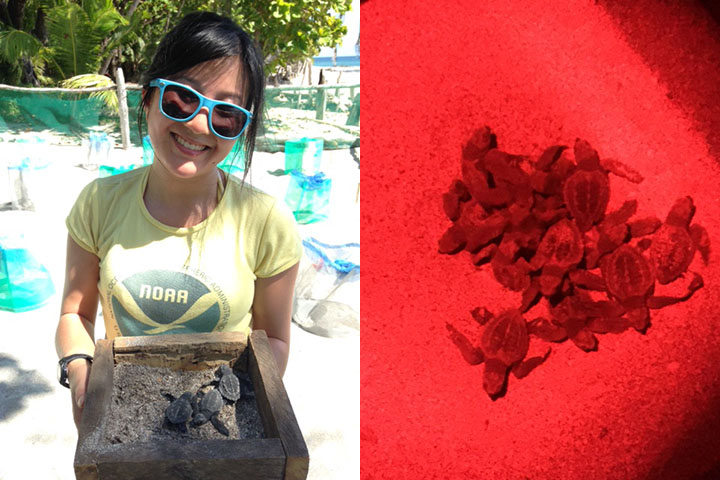 Because I had arrived at the end of sea turtle nesting season, I mostly handled the hatchlings and released them into the ocean. When the newly hatched turtles had completely emerged from their nests, I would—while wearing a glove—pick up each one from its nest and head to the ocean. I would then set the turtles down on the sand and watch them walk into the ocean. Some turtles would lose their way because they would walk in the wrong direction or get swept aside by a big wave, so it was my job to make sure they found their way to the ocean without mishap. Most of my turtle volunteer shifts were at night, and because sea turtles are very sensitive to white light, we could only use a red light while handling them. During night shifts, we were always paired with a second person, allowing us to have one person handle the hatched turtles while the other could stand guard at the hatchery (a very important job, as I observed my first night). After releasing the turtles, I had to record the number of turtles released, the time of the release, and other notes. Each of the nests held roughly 80-100 eggs, and about 50-70 eggs would hatch, which was an incredible sight.

Don't Stop (Thinking About What You Can Do)

This trip was an absolutely amazing experience for me. By working with these turtles, I began to fulfill my dream of making a global impact on endangered species populations. On top of that, I was able to connect with other people who care about these issues and form a deep bond over this shared experience. In the future, I hope to continue volunteering for the conservation of imperiled species like the tiny sea turtles I encountered in Costa Rica. In 2017, I plan to travel to Thailand to work with the endangered elephant population. But there are lots of ways to protect endangered species at home too. How do you plan to help? Valerie Chu is an Environmental Scientist who has been providing support for the Office of Response and Restoration's Emergency Response Division software projects since 2012, when she obtained her undergraduate degree in Environmental Science and Resource Management and then started working with NOAA and Genwest. During her spare time, she volunteers with animal welfare-related causes such as PAWS and Zazu’s House Parrot Sanctuary. 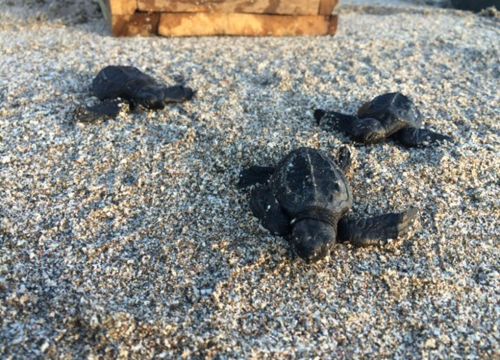 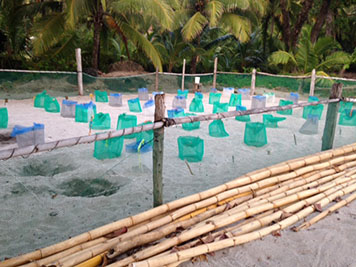 Volunteers with ASVO place sea turtle eggs collected from Costa Rican beaches into a hatchery with nets covering the nests to protect them from poachers, predators, and other threats. The eggs hatch less than two months later. (Used with permission of Valerie Chu)
Back to top