When Boats Don't Float: From Sunken Wrecks to Abandoned Ships 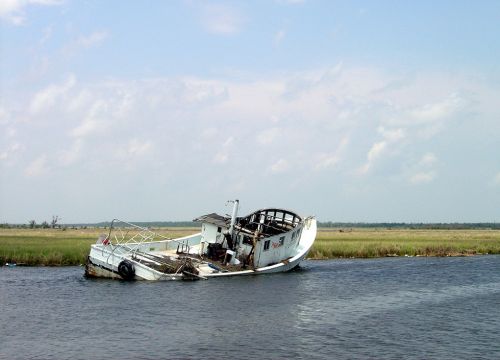 Ships end up wrecked or abandoned for many reasons and can cause a variety of environmental and economic issues. After Hurricanes Katrina and Rita, thousands of vessels like this one needed to be scrapped or salvaged in the Gulf of Mexico. (NOAA)

NOVEMBER 9, 2015 -- The waterways and coastlines of the United States are an important national resource, supporting jobs and providing views and recreation.

However, the past century of maritime commerce, recreation, and even warfare has left a legacy of thousands of sunken, abandoned, and derelict vessels along our coasts, rivers, and lakes.

Some of these sunken shipwrecks are large commercial and military vessels such as the USS Arizona in Pearl Harbor, Hawaii; the Edmund Fitzgerald in the Great Lakes; and the recent tragic loss of the 790 foot cargo ship El Faro and its crew off the Bahamas. 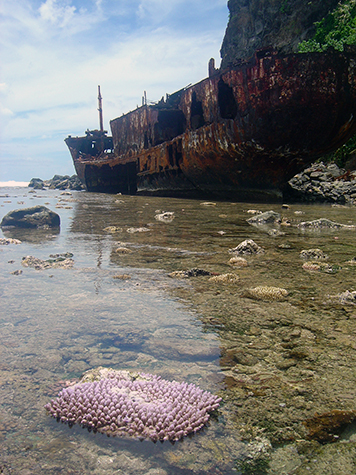 Some shipwrecks, like this one stranded among coral in American Samoa, can become threats to marine life and people. (NOAA)

These large vessels may be environmental threats because of their cargoes, munitions, and fuel, but many also are designated as submerged cultural resources—part of our maritime heritage. Some even serve as memorials or national historic landmarks.

Unless they are pollution hazards, or shallow enough to be threats to navigation or become dive sites, most are largely forgotten and left undisturbed in their deep, watery resting sites.

But another class of wrecks, abandoned and derelict boats, are a highly visible problem in almost every U.S. port and waterway.

Some vessels are dilapidated but still afloat, while others are left stranded on shorelines, or hidden just below the surface of the water.

These vessels can have significant impacts on the coastal environment and economy, including oil pollution, marine debris, and wildlife entrapment. They become hazards to navigation, illegal release points for waste oils and hazardous materials, and general threats to public health and safety.

Most derelict and abandoned vessels are the result of chronic processes—rot and rust and deterioration from lack of maintenance or economic obsolescence—with vessels slowly worsening until they sink or become too expensive to repair, and around that point are abandoned.

Others are mothballed or are awaiting repair or dismantling. If the owners can't afford moorage and repairs, or if the costs to dismantle the ship exceed the value of the scrap, the owners often dump the boat and disappear. Many vessels end up sinking at moorings, becoming partially submerged in intertidal areas, or stranding on shorelines after their moorings fail. These vessels typically lack insurance, have little value, and have insolvent or absentee owners, a problematic and expensive combination.

Another source of abandoned vessels comes from major natural disasters. After large hurricanes, coastal storms, and tsunamis, a large number of vessels of varying sizes, conditions, and types may be damaged or set adrift in coastal waters.

For example, approximately 3,500 commercial vessels and countless recreational vessels needed to be salvaged or scrapped after Hurricanes Katrina and Rita hit the Gulf Coast in 2005. And remember the empty squid boat that drifted across the Pacific Ocean after the 2011 Japan earthquake and tsunami?

NOAA's interests in this wide range of lost or neglected ships include our roles as scientific advisers to the U.S. Coast Guard, as stewards of marine living and cultural resources (which extends to when these resources are threatened by pollution as well), and as the nation's chart maker to ensure that wrecks are properly marked for safe navigation.

This week we're taking a deeper dive into the many, varied, and, at times, overlooked issues surrounding the wrecks and abandoned vessels dotting U.S. waters. As recent events have shown, such as in a recently discovered leaking wreck in Lake Erie and a rusted tugboat left to rot in Seattle, this issue isn't going away.

First, check out our infographic below exploring the different threats from wrecked and abandoned ships and a gallery of photos highlighting some examples of these ships, both famous and ordinary.

UPDATE 11/16/2015: Take a look at the story featured during this deep dive: Using NOAA Tools to Help Deal with the Sinking Problem of Wrecked and Abandoned Ships. 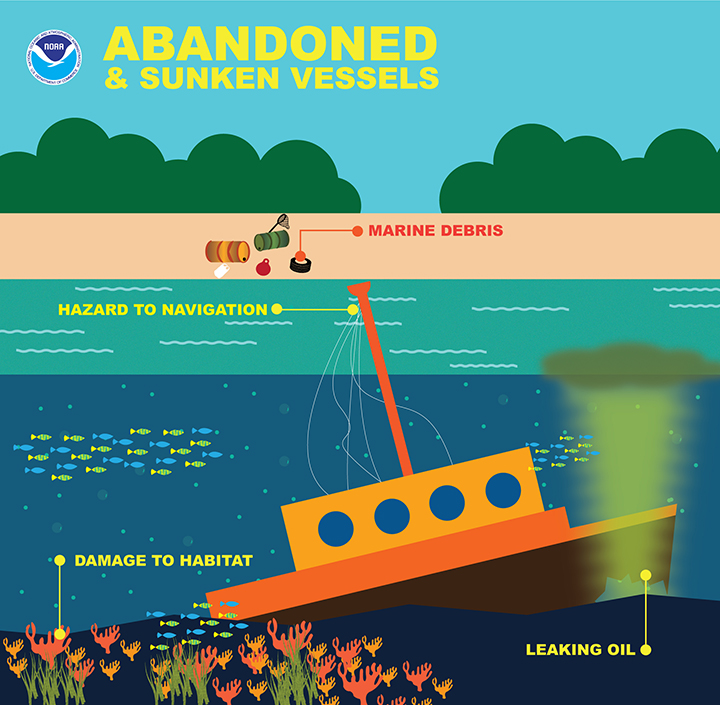 Sunken and abandoned ships can cause a lot of potential damage to the environment and the economy. (NOAA) Click to enlarge.