Portion of a letter from Kelli Middlestead from the Franklin School, Burlingame, California to Walter Stieglitz the Regional Director of the Alaska Region of the U.S. Fish and Wildlife Service, 04/13/1989.

OCTOBER 22, 2013 -- The impacts of an oil spill can be varied: closed beaches, dead fish, oiled birds and wildlife—just to name a few. But the impacts can also be emotional, often drawing out of people feelings like anger, sadness, frustration, or an eagerness to help. Those of us at NOAA who work to minimize the impacts of oil spills on America's water, coasts, plants, and animals are not immune to these impacts either. But we are glad to know that people care. Here a few examples of letters written by school kids after they learned about oil spills in Alaska and California—and how these spills affected them. On April 13, 1989, second grader Kelli Middlestead of the Franklin School in Burlingame, Calif., let her feelings be known after hearing about the Exxon Valdez oil spill in Prince William Sound, Alaska. She addressed her letter, illustrated with her beloved sea otters, to Walter Stieglitz, Alaskan Regional Director of the U.S. Fish and Wildlife Service. (Hat tip to the National Archive's excellent Tumblr, where you can view the full letter.) In November of 2007, middle school students on a science camp field trip to a San Francisco beach were upset instead to find oil on the water, beach, and even the birds. Days earlier, the cargo ship Cosco Busan had crashed into the San Francisco-Oakland Bay Bridge and spilled 53,000 gallons of thick fuel oil into the marine waters nearby. While they were saddened by the events, the seventh grade students from Old Orchard Middle School in Campbell, Calif., decided to help by writing hand-written and illustrated thank you cards to the people cleaning up the oil spill. According to a press release about their efforts [PDF]: "Everyone started pitching in and we came up with the idea to write cards," said seventh grade student Erin. "We felt helpless that we couldn't go and help the animals or clean up the beach," said Alex, another seventh grader from Old Orchard School. "We saw birds staggering and people trying to catch them." "These cards did a lot for the morale of our cleanup crew," said Barry McFarland of the response company O'Brien's Group, which worked to clean up the spill at Muir Beach and received the students' cards. "Some of our crew were actually moved to tears." You can read more of the thank you notes from the concerned students [PDF]. 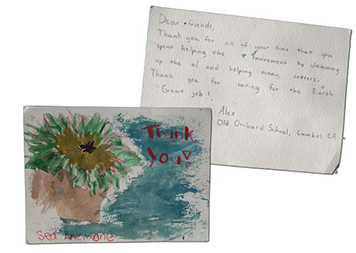 An example of the thoughtfully crafted thank you cards sent to oil spill responders by seventh graders in California after the 2007 Cosco Busan oil spill.
Back to top