When Planning for Disasters, an Effort to Combine Environmental and Human Health Data

OCTOBER 9, 2014 -- Immediately following the Deepwater Horizon oil spill of 2010, there was a high demand for government agencies, including NOAA, to provide public data related to the spill very quickly. Because of the far-reaching effects of the spill on living things, those demands included data on human health as well as the environment and cleanup. In mid-September of 2014, a group of scientists including social and public health experts, biologists, oceanographers, chemists, atmospheric scientists, and data management experts convened in Shepherdstown, West Virginia, to discuss ways they could better integrate their respective environmental and health data during disasters. The goal was to figure out how to bring together these usually quite separate types of data and then share them with the public during future disasters, such as oils spills, hurricanes, tornadoes, and floods. The Deepwater Horizon spill experience has shown government agencies that there are monitoring opportunities which, if taken, could provide valuable data on both the environment and, for example, the workers that are involved in the cleanup. Looking back, it was discovered that at the same time that "vessels of opportunity" were out in the Gulf of Mexico assisting with the spill response and collecting data on environmental conditions, the workers on those vessels could have been identified and monitored for future health conditions, providing pertinent data to health agencies. A lot of environmental response data already are contained in NOAA's online mapping tool, the Environmental Response Management Application (ERMA®), such as the oil's location on the water surface and on beaches throughout the Deepwater Horizon spill, chemicals found in sediment and animal tissue samples, and areas of dispersant use. ERMA also pulls together in a centralized format and displays Environmental Sensitivity Index data, which include vulnerable shoreline, biological, and human use resources present in coastal areas; ship locations; weather; and ocean currents. Study plans developed to assess the environmental impacts of the spill for the Natural Resource Damage Assessment and the resulting data collected can be found at www.gulfspillrestoration.noaa.gov/oil-spill/gulf-spill-data. Health agencies, on the other hand, are interested in data on people's exposure to oil and dispersants, effects of in situ burning on air quality, and heat stress in regard to worker health. They need information on both long-term and short-term health risks so that they can determine if impacted areas are safe for the communities. Ideally, data such as what are found in ERMA could be imported into health agencies' data management systems which contain human impact data, creating a more complete picture. Putting out the combined information to the public quickly and transparently will promote a more accurate representation of a disaster's aftermath and associated risks to both people and environment. Funded by NOAA's Gulf of Mexico Disaster Response Center and facilitated by the University of New Hampshire’s Coastal Response Research Center, this workshop sparked ideas for better and more efficient collaboration between agencies dealing with environmental and human health data. By setting up integrated systems now, we will be better prepared to respond to and learn from man-made and natural disasters in the future. As a result of this workshop, participants formed an ongoing working group to move some of the best practices forward. More information can be found at crrc.unh.edu/workshops/EDDM. 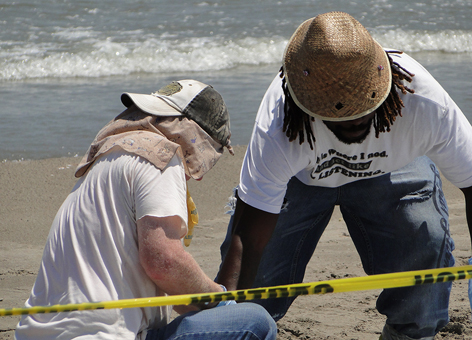 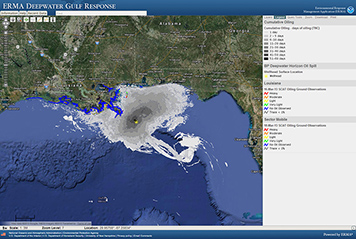 ERMA Deepwater Gulf Response contains a wide array of publicly available data related to the 2010 Deepwater Horizon oil spill in the Gulf of Mexico. Here, you can see cumulative levels of oiling on the ocean surface throughout the spill, shorelines affected, and the location of the damaged wellhead. (NOAA)
Back to top