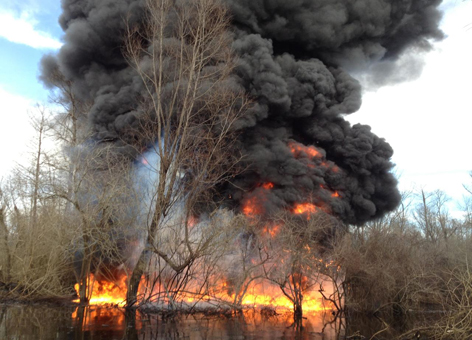 A view of one of the controlled burns to remove oil spilled in a wooded swamp outside of Baton Rouge, Louisiana, on January 19, 2013. (U.S. Coast Guard)

FEB. 12, 2013 — The longer NOAA Scientific Support Coordinator LTJG Kyle Jellison works in the Gulf of Mexico, the more he comes to understand why oil spill responders claim that "every spill is a unique situation." He has been providing scientific support for a pollution response in the remote, wooded swamp tucked inside Bayou Sorrel, about an hour outside of Baton Rouge, La. In early January, a pipeline running underground ruptured, and responders believed it was leaking just a few barrels of crude oil onto land.

Right now, up to 4 feet of water is covering the entire affected area (about 1 acre), and cleanup crews are wading through the oil slick in hip waders. This has been quite the challenge. Part of Jellison's job is to help figure out how to expedite this cleanup while minimizing damage to the environment. For this case, the response team agreed that it was time to get out the matches and get ready for a fire. It is not for every spill that in situ burning, or the controlled burning of spilled oil "in place," comes up.

This was the first incident that Jellison has been involved with where burning has been seriously discussed as a spill response option and one of only a few burns conducted in an environment other than a marsh, where the practice is more common for removing oil. (You may remember similar burns on the open ocean during the 2010 Deepwater Horizon/BP oil spill.) In preparation for the burn, they needed to consider many factors: public safety and health, worker safety and health, effects to vegetation and animal species, proper conditions to sustain combustion, controls for limiting collateral damage, potential quantity of oil removed, and more. 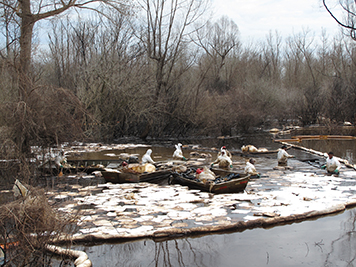 Oil still remains in part of the flooded Louisiana swamp, where a cleanup crew in boats and hip waders worked to sop up the leftover oil using sorbent pads and boom on February 4, 2013. (NOAA/LTJG Kyle Jellison)

The response team determined that rising flood waters would complicate the cleanup operation and increase the probability of the oil escaping containment and spreading throughout the swamp. Controlled burning, on the other hand, could rapidly remove a high percentage of oil while causing minimal local damage to area plant species. (With their roots protected underwater, the plants would be able to grow back after the oiled upper portions were burned off.) As these plans took shape, burn team safety was paramount, and cleanup crews corralled the oil to create thick pools of oil for combustion.

Considering the circumstances, the in situ burns seemed like a great success. The fire team was able to ignite three patches of pooled oil with a handheld propane brush torch; one burn lasted 5 minutes and the other two burns lasted 15 minutes. The fires did not spread outside the oiled area, and they have heard no reports of injury or ill health.

With 35 minutes of total combustion, the burns were able to remove an estimated 20 to 30 barrels of oil from the affected swamp, leaving 30 to 40 barrels behind for further clean up. But how did the responders end up having dealing with so many barrels of oil if initial reports were that only a few barrels leaked? The rain and the flooding have been drawing oil up from the soils surrounding the ruptured pipeline, and the oil has been rising to the water's surface. If the pipeline buried about 6 feet underground can generate a pool of oil at the surface under dry conditions, how much oil has really been released? Could more oil show up later? 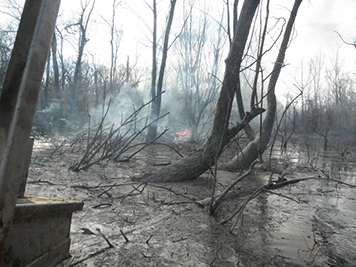 Taken January 19, 2013, after the in situ burn incinerated oil from a wooded swamp at Bayou Sorrel. The landscape may look stark, but the controlled burn removes the oil and allows the vegetation to regenerate in a cleaner environment. (U.S. Coast Guard)

Efforts are underway to better understand this tricky situation by placing a closed loop of containment boom over the source point for several days. If more oil appears inside the boom, then the soil is continuing to release oil. If that is the case, this oily situation might persist for months to come, but only time will tell. Stay tuned at IncidentNews.noaa.gov.