When Studying How to Clean Oiled Marshes, NOAA Scientists Have Their Work Cut Out for Them

APRIL 19, 2013 — To clean, or not to clean: That is the question. And if you're going to clean, how best to do it? This is a question that responders face whenever oil ends up on a shoreline after an oil spill. It’s a particularly difficult question when this happens on the shoreline of marshes.

Although we may sometimes think of marshes as murky, swampy, or smelly, marshes are highly sensitive environments with soft sediments that support a huge diversity of creatures, including birds, mammals, fish, crabs, and shrimp. Marshes are also incredibly productive habitats that act as nurseries for many juvenile organisms and whose large amounts of decaying plant material are the base of a complex food web. They also provide other important ecological services like storm surge protection and shoreline stabilization and water quality improvement. In many instances, when marshes get oiled, the best response action is no response—meaning no human-led cleanup. In the spill response world, we call this "natural recovery."

Natural recovery is often the best option for an oiled marsh because nearly all types of active cleanup will include some unintentional habitat damage or disturbance. This can stem from the type of equipment used, the way it is used, or the mere presence of cleanup workers disturbing wildlife or trampling the marsh vegetation. The last 40 years of cleaning up oil spills in marshes has demonstrated that active, aggressive cleaning can cause as much or more short- and long-term damage than leaving the oil in place to break down naturally. 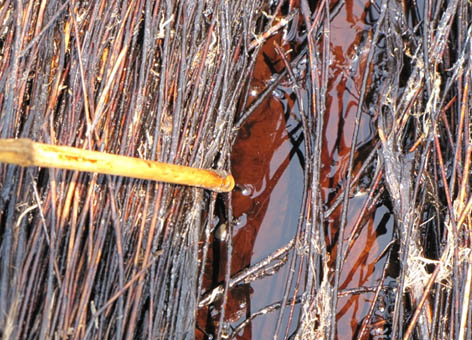 Oil from the Deepwater Horizon spill oozes out from beneath a vegetation mat in a marsh in Barataria Bay's Bay Jimmy, Louisiana. (Louisiana Department of Environmental Quality/Mike Broussard)

When Natural Recovery Is Not Enough

So, when over 30 miles of sensitive salt marshes in Louisiana's Northern Barataria Bay were heavily oiled as a result of the 2010 Deepwater Horizon oil spill, natural recovery was the preferred approach. However, in the areas with the most substantial and persistent oiling, the oil did not appear to be weathering or naturally degrading over time. In these areas, a dense, heavy layer of oiled, matted vegetation was lying overtop thick, fresher-looking emulsified oil (meaning it had water mixed in it). The vegetation mats were limiting the oil's exposure to sunlight, air circulation, and tidal flushing—all natural factors which help break down oil. 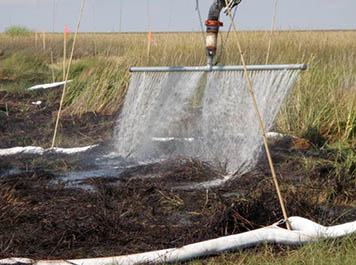 Low-pressure flushing was one of the options we tried for cleaning up the heavily oiled mats of marsh vegetation in Barataria Bay. (NOAA/Scott Zengel)

A number of "traditional" methods of marsh cleanup were tried earlier in the spill response, including low-pressure flushing with ambient seawater, skimming, vacuuming, applying materials to absorb the oil, and natural recovery. However, they performed poorly and in some cases caused additional damage to the marsh. So what to do? Since the tried-and-true, traditional methods of cleanup weren't working, this spill's Shoreline Cleanup and Assessment Technique (SCAT) program (which surveys an affected shoreline after an oil spill) proposed a field test of various treatment methods, led by the oil spill science experts on NOAA's Scientific Support Team.

In addition to proposing a series of test treatments, they set aside several "no treatment" (natural recovery) sites with similar oiling conditions, and established nearby reference sites as well, both for later comparison to the treated sites. All of the proposed test treatments included cutting the oiled vegetation to expose the thick oil beneath it, in order to accelerate weathering of the oil. In addition to vegetation cutting, the following treatments were tried: 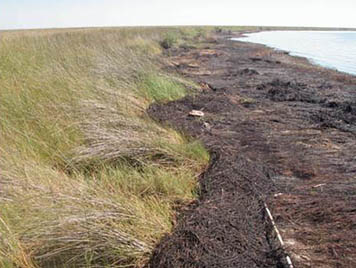 After the 2010 Deepwater Horizon spill, a heavy layer of oiled vegetation mats were preventing the thick emulsified oil underneath from breaking down along Barataria Bay’s marshes. (NOAA/Scott Zengel) 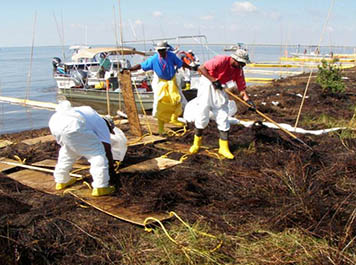 As it turned out, conventional "weed whackers" were no match for the dense, heavily oiled vegetation mats, even when we tried different cutting techniques and cutting attachments. So we raked the vegetation. In the end, the only treatment that showed promise was the vegetation raking. As we monitored the treated plots, however, we found that the ebb and flow of the tide laid the raked vegetation back down on the marsh, reforming the oiled vegetation mats and continuing to trap the layer of thick emulsified oil on the marsh surface. It quickly became apparent to us SCAT program scientists that any successful treatment would require removing the oiled vegetation.

A fresh round of investigation into cutting devices began. Ultimately, a heavy-duty, commercial power hedge trimmer was the solution. It was successfully used to cut through the dense, heavily oiled mats of laid-over vegetation and to cut oiled vegetation that still stood upright. 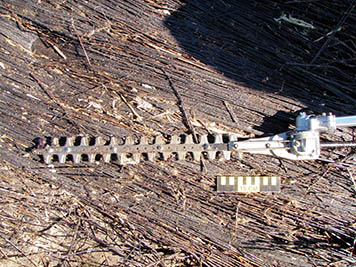 This type of commercial power hedge trimmer proved to be the tool of choice for cutting through the densely oiled marsh vegetation. (NOAA/Scott Zengel)

By aggressively raking the oiled vegetation and the thick oil layer on the surface of the marsh, we were able to remove much of the oil, reducing the surface oiling and risk of re-oiling other vegetation. Initial monitoring showed that this approach resulted in completely removing the heavily oiled vegetation mats in the raked and cut plots. Most importantly, the character of the remaining oil on the marsh area changed from mostly thick emulsified oil to a predominance of more weathered surface oil residue that posed far less of a risk to wildlife or for refloating and re-oiling the marsh.

In all, seven miles of the most heavily oiled areas in Northern Barataria Bay, La., were treated by raking and cutting. Most of this work was conducted by hand, using walk boards to reduce the foot traffic in the marsh. It appears that the treatment was effective and that impacts to the marsh from the cleanup action were limited. 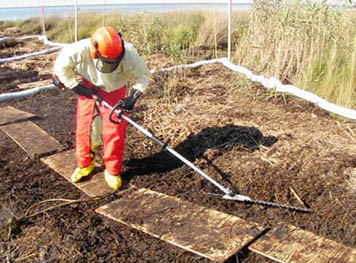 After cleanup workers used the hedge trimmers to cut the oiled vegetation mats (seen here), they would rake aggressively the oiled vegetation and thick oil layer beneath, successfully removing much of the remaining oil along Barataria Bay's test marshes. (NOAA/Scott Zengel)

We are continuing to monitor the test plots in order to fully understand whether this cleanup action was the best approach and what the ecological effects or impacts of "treatment" versus "no treatment" are. Stay tuned for a future post that explores the results of the data collected thus far. This is a post by Office of Response and Restoration Biologist Nicolle Rutherford.