Who Thinks Crude Oil Is Delicious? These Ocean Microbes Do 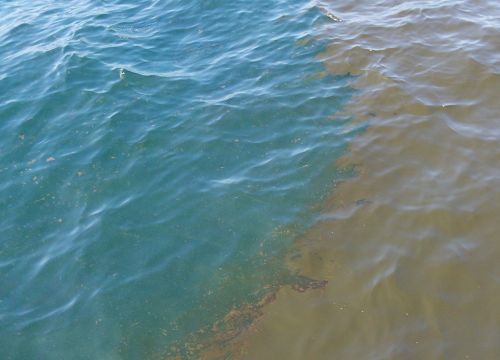 There are at least seven species of ocean bacteria that can survive by eating oil and nothing else. However, usually only a small number of oil-eating bacteria live in any given part of the ocean, and it takes a few days for their population to increase to take advantage of their abundant new food source during an oil spill. (NOAA)

This is a post by Dalina Thrift-Viveros, a chemist with NOAA's Office of Response and Restoration.

But if you were a microbe living in the ocean you might have a different answer.

There are species of marine bacteria in several families, including Marinobacter, Oceanospiralles, Pseudomonas, and Alkanivorax, that can eat compounds from petroleum as part of their diet. In fact, there are at least seven species of bacteria that can survive solely on oil [1].

These bacteria are nature's way of removing oil that ends up in the ocean, whether the oil is there because of oil spills or natural oil seeps. Those of us in the oil spill response community call this biological process of removing oil "biodegradation."

What Whets Their Oily Appetites?

Communities of oil-eating bacteria are naturally present throughout the world's oceans, in places as different as the warm waters of the Persian Gulf [2] and the Arctic conditions of the Chukchi Sea north of Alaska [3].

Each community of bacteria is specially adapted for the environment where it is living, and studies have found that bacteria consume oil most quickly when they are kept in conditions similar to their natural environments [4]. So that means that if you took Arctic bacteria and brought them to an oil spill in the Gulf of Mexico, they would not eat the oil as quickly as the bacteria that are already living in the Gulf. You would get the same result in the reverse case, with the Arctic bacteria beating out the Gulf bacteria at an oil spill in Alaska.

Other factors that affect how quickly bacteria degrade oil include the amount of oxygen and nutrients in the water, the temperature of the water, the surface area of the oil, and the kind of oil that they are eating [4][5][6]. That means the bacteria that live in a given area will consume the oil from a spill in the summer more quickly than a spill in the winter, and will eat light petroleum products such as gasoline or diesel much more quickly than heavy petroleum products like fuel oil or heavy crude oil. 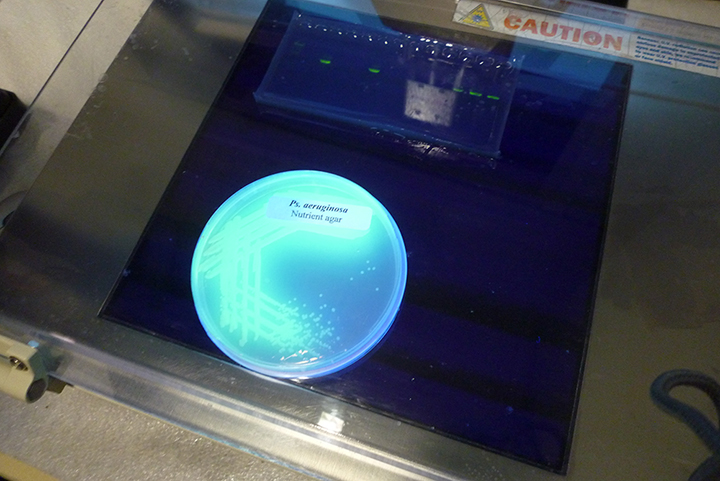 This bacteria, fluorescing under ultraviolet light in a petri dish, is Pseudomonas aeruginosa. It has been used during oil spills to break down the components of oil. (Credit: Wikimedia user Sun14916/Creative Commons Attribution-ShareAlike 3.0 Unported license)

Asphalt, the very heaviest component of crude oil, is actually so difficult for bacteria to eat that we can use it to pave our roads without worrying about the road rotting away.

What About During Oil Spills?

People are often interested in the possibility of using bacteria to help clean up oil spills, and most oil left in the ocean long enough is consumed by bacteria.

However, most oil spills last only a few days, and during that time other natural "weathering" processes, such as evaporation and wave-induced breakup of the oil, have a much bigger effect on the appearance and location of the oil than bacteria do. This is because there are usually only a small number of oil-eating bacteria in any given part of the ocean, and it takes a few days for their population to increase to take advantage of their abundant new food source.

Because of this lag time, biodegradation was not originally included in NOAA's oil weathering software ADIOS. ADIOS is a computer model designed to help oil spill responders by predicting how much of the oil will stay in the ocean during the first five days of a spill.

However, oil spills like the 2010 Deepwater Horizon well blowout, which released oil for about three months, demonstrate that there is a need for a model that can tell us what would happen to the oil over longer periods of time. My team in the Emergency Response Division at NOAA's Office of Response and Restoration has recognized that. As a result, version 3 of ADIOS, due to be released later in 2015, will take into account biodegradation.

My team and I used data published in scientific journals on the speed of oil biodegradation under different conditions to develop an equation that can predict how fast the components of oil will be consumed, and how the speed of this process can change based on the surface area-to-mass ratio of the oil and the climate it is in. A report describing the technical details of the model will be published in the upcoming Proceedings of the Arctic and Marine Oilspill Program Technical Seminar, which will be released after the June conference.

Including oil biodegradation in our ADIOS software will provide oil spill responders with an even better tool to help them make decisions about their options during a response. As part of the team working on this project, it has provided me with a much greater appreciation for the important role that oil-eating bacteria play in the long-term effort to keep our oceans free of oil.

I know I'm certainly glad they think oil is delicious.