Why Are Seabirds so Vulnerable to Oil Spills? 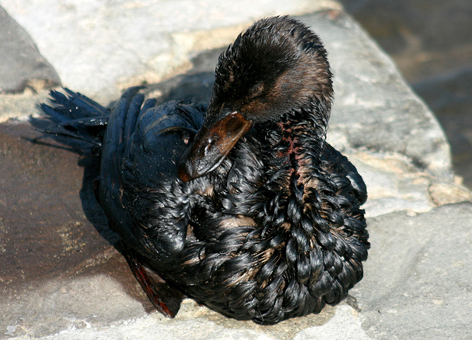 A Surf Scoter, a large sea duck, was covered in oil as a result of the 2007 Cosco Busan oil spill in San Francisco Bay. See how the oil causes its feathers to mat and separate. (Creative Commons: Brocken Inaglory, Attribution-ShareAlike 3.0 Unported License)

JANUARY 13, 2015 -- Out of the squawking thousands of black and white birds crowding the cliff, a single male sidled up to the rocky edge. After arranging a few out-of-place feathers with his sleek beak, the bird plunged like a bullet into the ocean below.

These penguin look-alikes (no relation) are Common Murres. Found along the U.S. coast from Alaska to California, this abundant species of seabird dives underwater, using its wings to pursue a seafood dinner, namely small fish.

During an oil spill, however, these classic characteristics of murres and other seabirds work to their disadvantage, upping the chance they will encounter oil—and in more ways than one.

To understand why seabirds are so vulnerable to oil spills, let's return to our lone male murre and a hypothetical oil spill near his colony in the Gulf of Alaska. 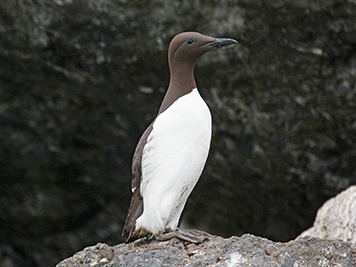 The Common Murre, one of the most studied species of seabird precisely because it is so often the victim of oil spills. (Creative Commons: Dick Daniels, Attribution-ShareAlike 3.0 Unported License)

Preening in an Oil Sheen

After diving hundreds of feet beneath the cold waters of the North Pacific Ocean, the male murre pops back to the surface with a belly full of fish—and feathers laminated in oil.

This bird has surfaced from his dinner dive into an oil slick, a common problem for diving birds during oil spills. His coat of feathers, once warm and waterproof, is now matted. The oil is breaking up his interlocking layer of feathers, usually maintained by the bird's constant arranging and rearranging, known as preening.

With his sensitive skin suddenly exposed not just to the irritating influence of oil but also to the cold, the male murre becomes chilled. If he does not repair the alignment of his feathers soon, hypothermia could set in. This same insulating structure also traps air and helps the bird float on the water’s surface, but without it, the bird would struggle to stay afloat.

Quickly, the freshly oiled seabird begins preening. But with each peck of his pointed beak into the plumage, he gulps down small amounts of oil. If the murre ingests enough oil, it could have serious effects on his internal organs. Impacts range from disrupted digestion and diarrhea to liver and kidney damage and destruction of red blood cells (anemia).

But oil can find yet another way of entering the bird: via the lungs. When oil is spilled, it begins interacting with the wind, water, and waves and changing its physical and chemical properties through the process of weathering. Some components of the oil may evaporate, and the murre, bobbing on the water’s surface, could breathe in the resulting toxic fumes, leading to potential lung problems.

This single male murre is likely not the only one in his colony to experience a run-in with the oil spill. Even those seabirds not encountering the oil directly can be affected. With oil spread across areas where the birds normally search for food and with some of their prey potentially contaminated or killed by the oil, the colony may have to travel farther away to find enough to eat. On the other hand, large numbers of these seabirds may decide to up and move to another home for the time being.

At the same time that good food is becoming scarcer, these birds will need even more food to keep up their energy levels to stay warm, find food, and ward off disease. One source of stress—the oil spill—can exacerbate many other stresses that the birds often can handle under usual circumstances.

If the oil spill happens during mating and nesting time, the impacts can be even more severe. Reproducing requires a lot of energy, and on top of that, exposure to oil can hinder birds' ability to reproduce. Eggs and very young birds are particularly sensitive to the toxic and potentially deadly properties of oil. Murres lay only one egg at a time, meaning they are slower to replace themselves.

The glossy-eyed male murre we are following, even if he manages to escape most of the immediate impacts of being oiled, would soon face the daunting responsibility of taking care of his fledgling chick.

As young as three weeks old, his one, still-developing chick plops off the steep cliff face where the colony resides and tumbles into the ocean, perhaps a thousand feet to its waiting father below. There, the father murre is the chick's constant caregiver as they travel out to sea, an energy-intensive role even without having to deal with the potential fallout from an oil spill. 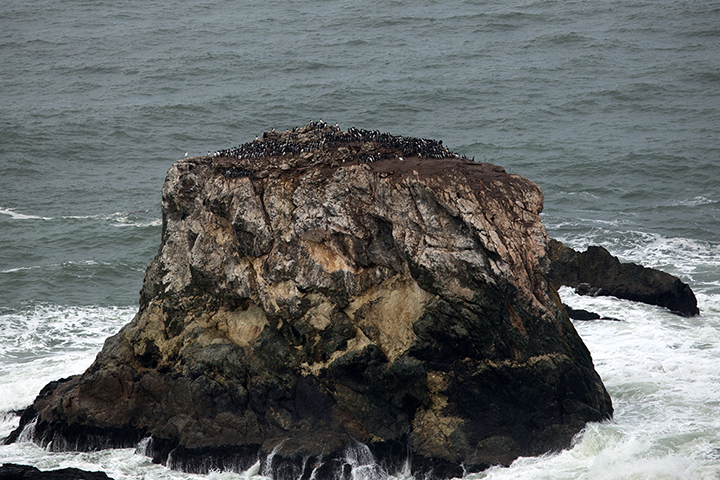 Murres are very social birds, living in large colonies on rocky cliffs and shores along the U.S. West Coast. If disturbed by an oil spill, many of these birds may set off temporarily to find a more suitable home. (Creative Commons: Donna Pomeroy, Attribution-NonCommercial 3.0 Unported License)

Birds of a Feather Get Oiled Together

Like a bathtub filled with rubber ducks, murres form giant floating congregations on the water, known as "rafts," which can include up to 250,000 birds. In fact, murres spend all but three or four months of the year out at sea. Depending on where the oil travels after a spill, a raft of murres could float right into it, a scenario which may be especially likely considering murre habitat often overlaps with major shipping channels.

After the 1989 Exxon Valdez oil spill in Alaska's Prince William Sound, responders collected some 30,000 dead, oil-covered birds. Nearly three-quarters of them were murres, but the total included other birds which dive or feed on the ocean surface as well. Because most bird carcasses never make it to shore intact where researchers can count them, they have to make estimations of the total number of birds killed. The best approximation from the Exxon Valdez spill is that 250,000 birds died, with 185,000 of them murres.

While this population of seabirds certainly suffered from this oil spill (perhaps losing up to 40 percent of the population), murres began recovering within a few years of the Exxon Valdez oil spill. Surprisingly resilient, this species is nonetheless one of the most studied seabirds [PDF] precisely because it is so often the victim of oil spills.