Why Is It So Hard to Count the Number of Animals Killed by Oil Spills?

DECEMBER 17, 2015 -- After an oil spill along the coast, the impacts might appear to be pretty obvious: oil on beaches, dead birds, oil-coated otters. When conducting a Natural Resource Damage Assessment, it's our job to measure those environmental impacts and determine what kind of restoration—and how much—is needed to make up for those impacts. But in general we don't base those calculations solely on how many animals were observed dead on shorelines, because that would drastically underestimate the total number of animals killed by an oil spill. Why? Well, for starters, the length of shoreline where animals might wash up could be very long, isolated, or otherwise difficult to survey. For a large oil spill, imagine trying to study a place as expansive as the Gulf of Mexico. This body of water covers roughly 600,000 square miles and borders five states. Also, significant portions of the shore are wetlands with convoluted shorelines that make searching and finding animals much more difficult than on sandy beaches.

Let Me Count the Ways

Trying to determine the total number of animals that died because of an oil spill offers multiple challenges. Quantifying these impacts to wildlife relies in part on people being able to find, record, and sometimes take samples of dead animal carcasses across an extended distance and length of time. They then would need to tie those deaths to a particular oil spill, which is part of our responsibility as we assess the environmental harm after a spill. It's also complicated by the fact that animals die every day for many reasons other than oil spills, due to changes in weather, food supplies, predation, background pollution, and disease. This difficult undertaking has numerous limitations, and as a result, relying on counts of animal deaths alone can drastically underestimate the actual harm caused by a spill. 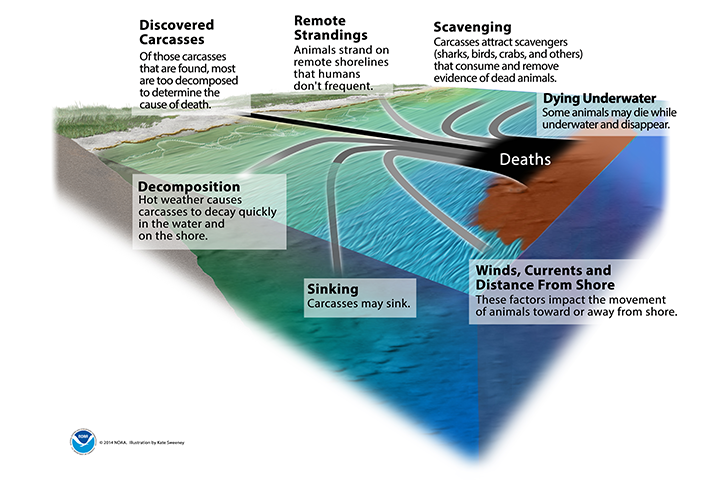 The challenge of finding an animal that dies from an oil spill: Only a fraction of the turtles, dolphins, birds, fish, and other animals killed by an oil spill are ever found. (NOAA) Click to enlarge.

For example, even if people can find a dead animal carcass, it might be too decomposed to tell if oil killed it. But more likely are the scenarios where animals directly killed by oil will never be found at all because they:

To make things even more challenging, oil spills can have indirect effects that don't outright kill animals and plants, at least, not right away. Dealing with exposure to oil can cause a number of damaging impacts, including lung disease (from inhaling oil vapors), stress hormone dysfunction, reduced growth, increased vulnerability to disease, heart failure and deformities in developing fish, and reproductive problems in animals such as dolphins and fish. These types of effects can lead to other health impacts and sometimes eventually death, with the fallout felt across generations. Simply trying to count the number of dead animal carcasses found immediately after an oil spill would miss these deaths (or births that never happen) that can come months or even years afterward.

Seek and You May or May Not Find

Despite these challenges, it's still useful to collect dead animal carcasses after an oil spill and use information gained from them to support other approaches for determining broader oil spill impacts. One such approach takes into account several additional types of data, along with the observations of dead animals, to infer the likely true number of animals killed by an oil spill. These data include different animals' estimated exposure to oil, health effects observed in laboratory and field studies, and basic information about animal behavior at different stages of life. For instance, after the 2007 Cosco Busan oil spill in California's San Francisco Bay, search teams recovered several thousand oiled birds, and additional studies were later performed to determine how many more dead birds were likely killed that were never seen or collected.

The remains of dead bird carcasses after 48 hours (left) and 96 hours (right) of being placed on a San Francisco Bay, California, beach as part of a study examining efficiency at finding dead birds from the 2007 Cosco Busan oil spill.

In one such study (known as a "Searcher Efficiency Study"), a study team randomly placed 107 real bird carcasses along San Francisco Bay shorelines over the course of three days, and teams were deployed to search for them and collect what they could find. It is surprisingly easy for searchers to miss dead birds on the beach since the animals blend in with other debris or beach wrack, can be hidden by small depressions, or be too far away to recognize. Since the study team knew the actual number and locations of carcasses deployed for the study, the number that search teams collected provided a basis for calculating how many dead birds were likely missed by search teams during the actual Cosco Busan oil spill. This study determined that a two-person search team would find 68% of the dead bird carcasses on San Francisco Bay beaches. More than a dozen other studies [PDF] were also performed after this oil spill, contributing additional data that went into the calculations of the total numbers and species of birds killed. Through this work, the actual number of birds killed by the spill was estimated to be 6,849, nearly two and a half times the number of birds actually collected during the Cosco Busan oil spill. We commonly use several other methods to determine the magnitude of an oil spill’s effects on animals and plants, including studies of habitat changes, laboratory toxicity studies, and modeling. Stay tuned because we plan to discuss these approaches more in-depth in the future. In the meantime, learn about the scientific processes we use to assess an oil spill’s environmental impacts at darrp.noaa.gov/science/our-scientific-process. 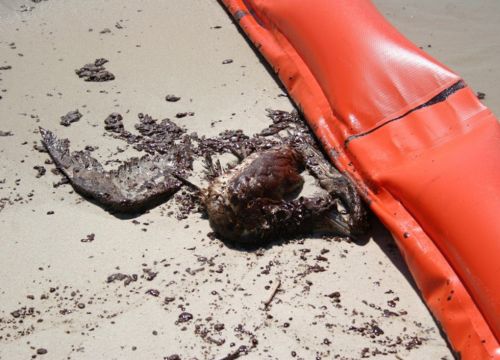 Many animals directly killed by oil spills will never be found at all for a number of reasons. Even if people can find a dead animal carcass, it might be too decomposed to tell if oil killed it. (Department of Interior) 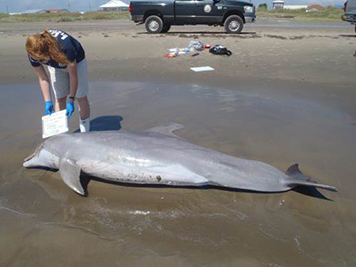 Oil spills can have indirect effects that don’t necessarily kill animals and plants, at least, not right away, but those impacts can lead to death and health and reproductive problems months or years later. (Credit: Louisiana Department of Fisheries and Wildlife)
Back to top