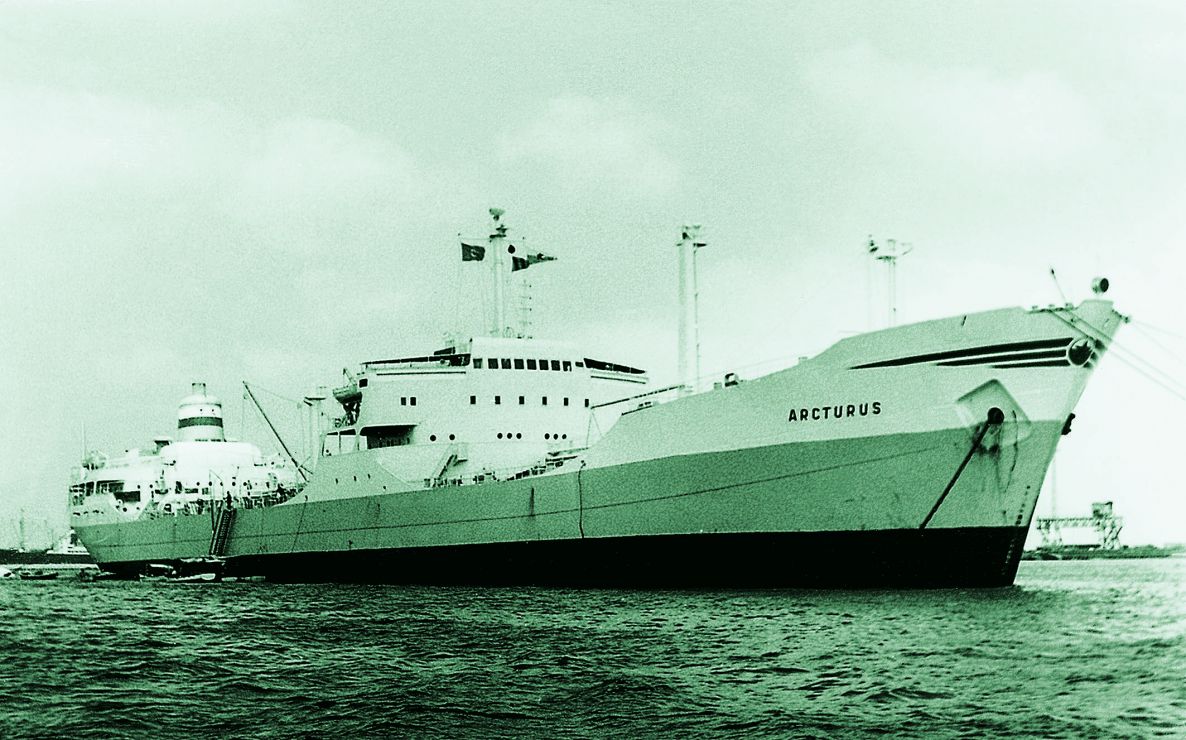 Shown here as the Arcturus, the vessel was sold and renamed several times. 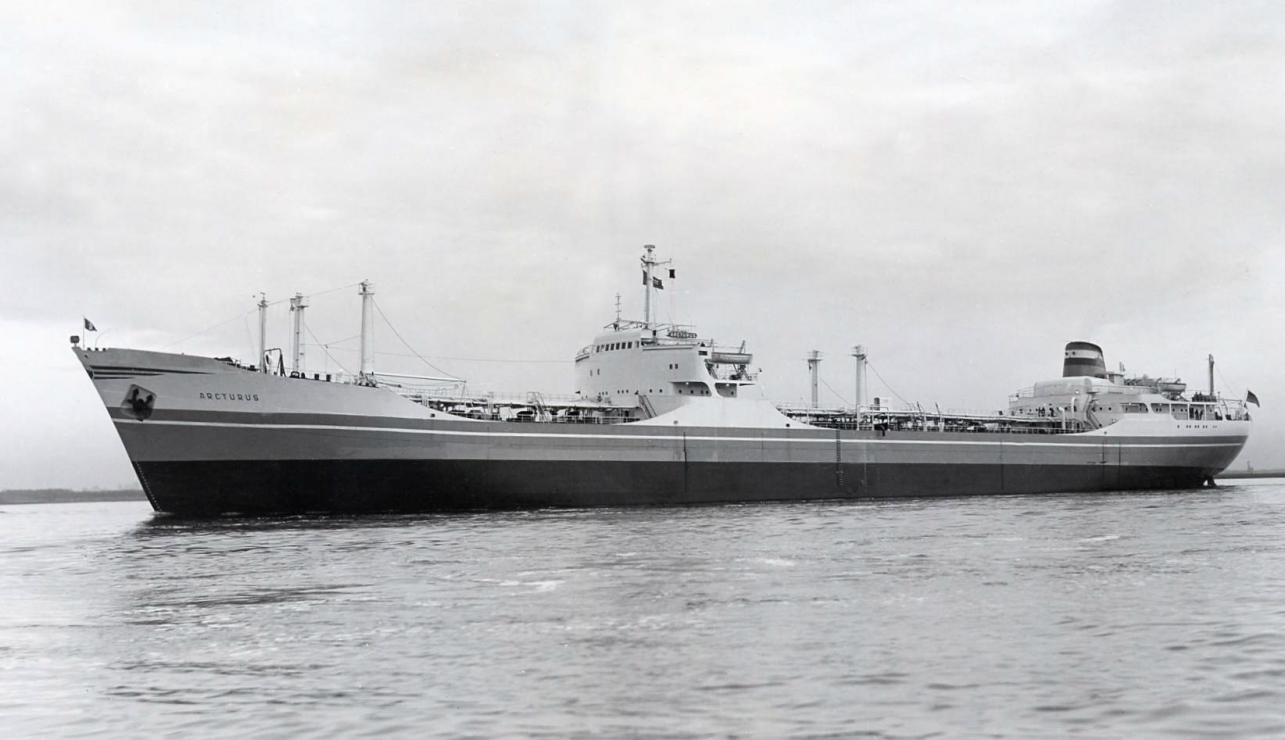 The Argo Merchant was built in Hamburg, Germany and was launched in December 1953 as the Arcturus, under Liberian registry. 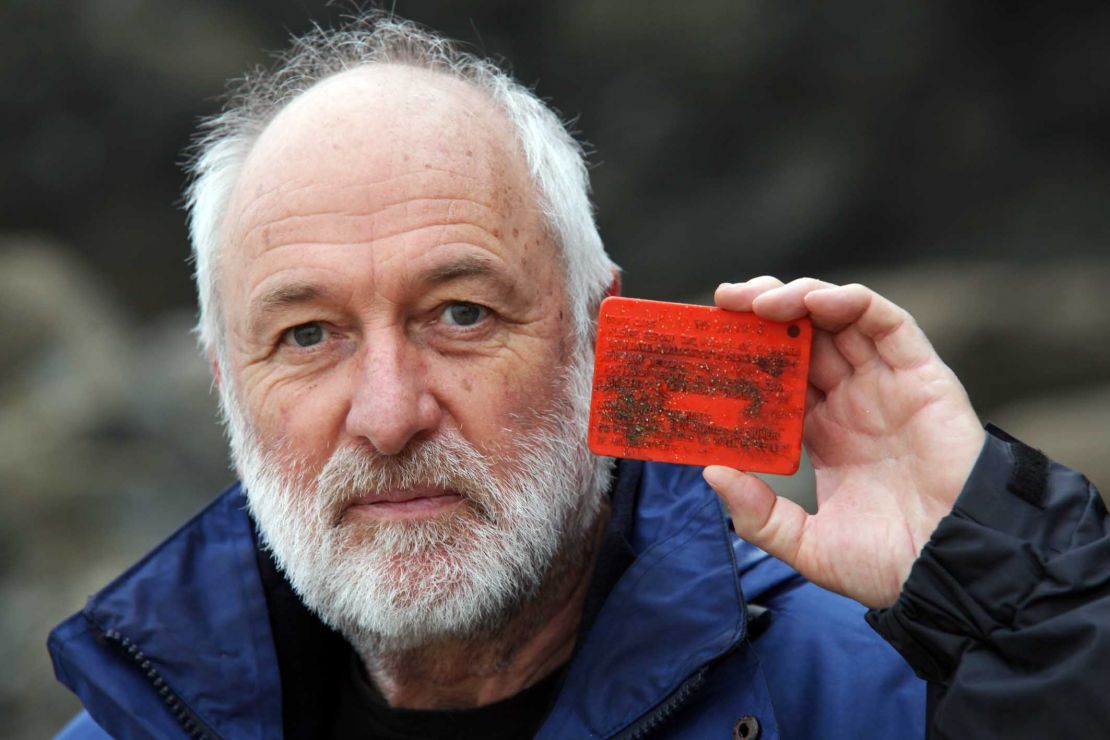 Interested in reading more about drift card found around the world? See the section, Drift Cards in the News, on the page, OR&R Drift Card Studies. 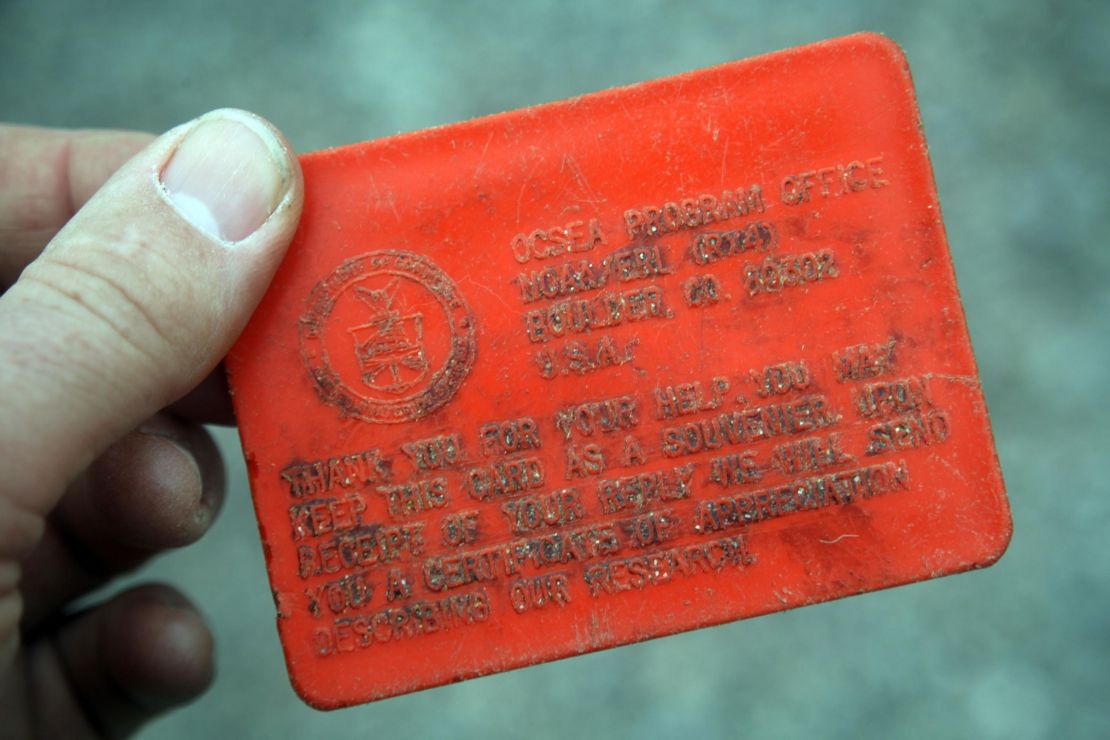 The back of the drift card shows the logo for the U.S. Department of Commerce and the following information:

Thank you for your help. You may keep this card as a souvenir. Upon receipt of your reply, we will send you a certificate of appreciation describing our research. 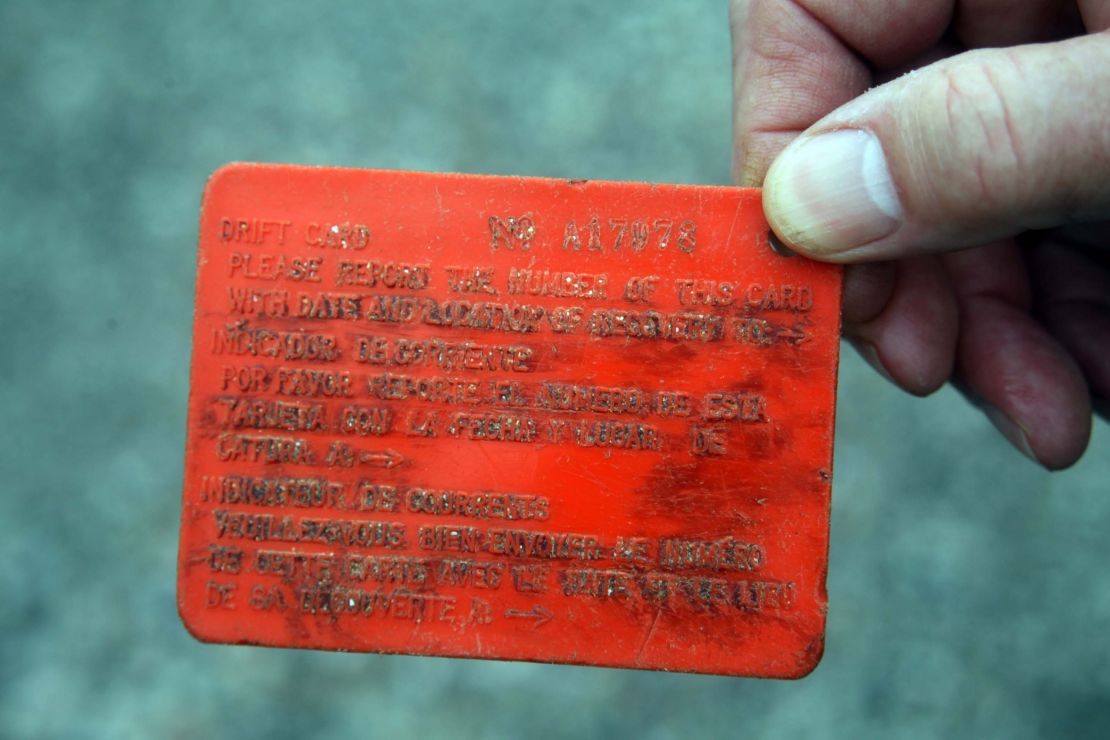 The front of this drift card reads: "Drift Card No. A17978. Please report the number of this card with date and location of recovery to: (turn card over)"

The instructions are also provided in Spanish and French. 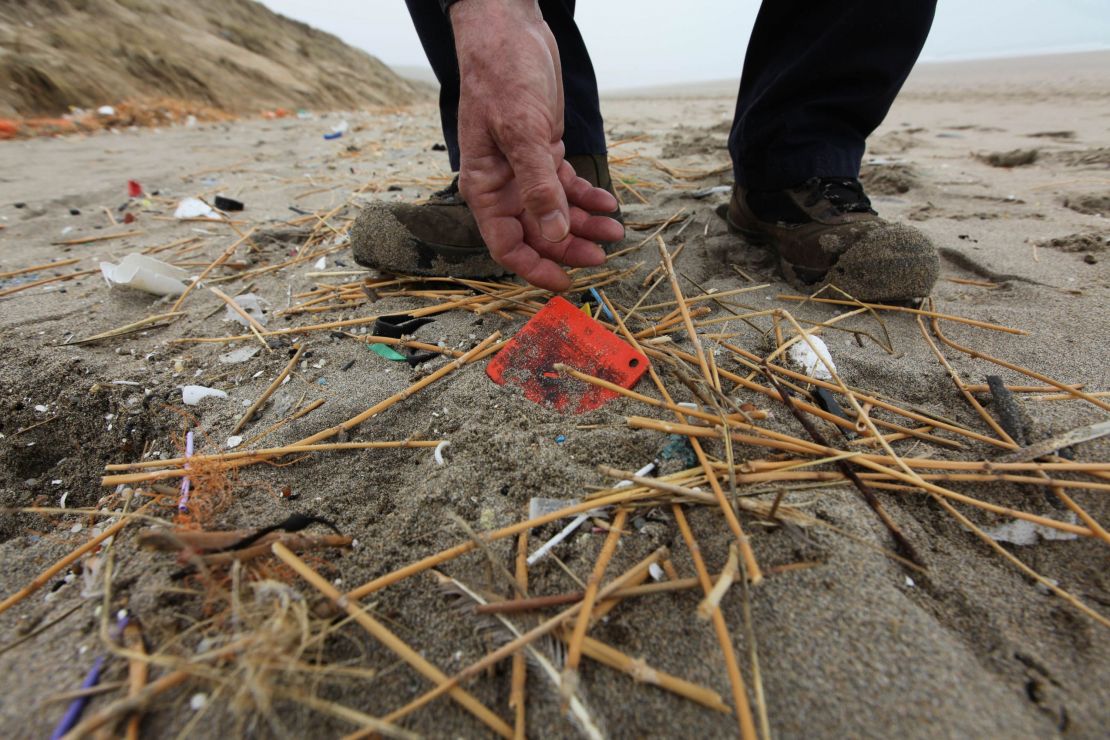 Back in December 1976, NOAA released these plastic cards from Nantucket Shoals to get an idea of the movement of the Argo Merchant spilled oil. Several of these drift cards have been found over the years in Ireland and France. 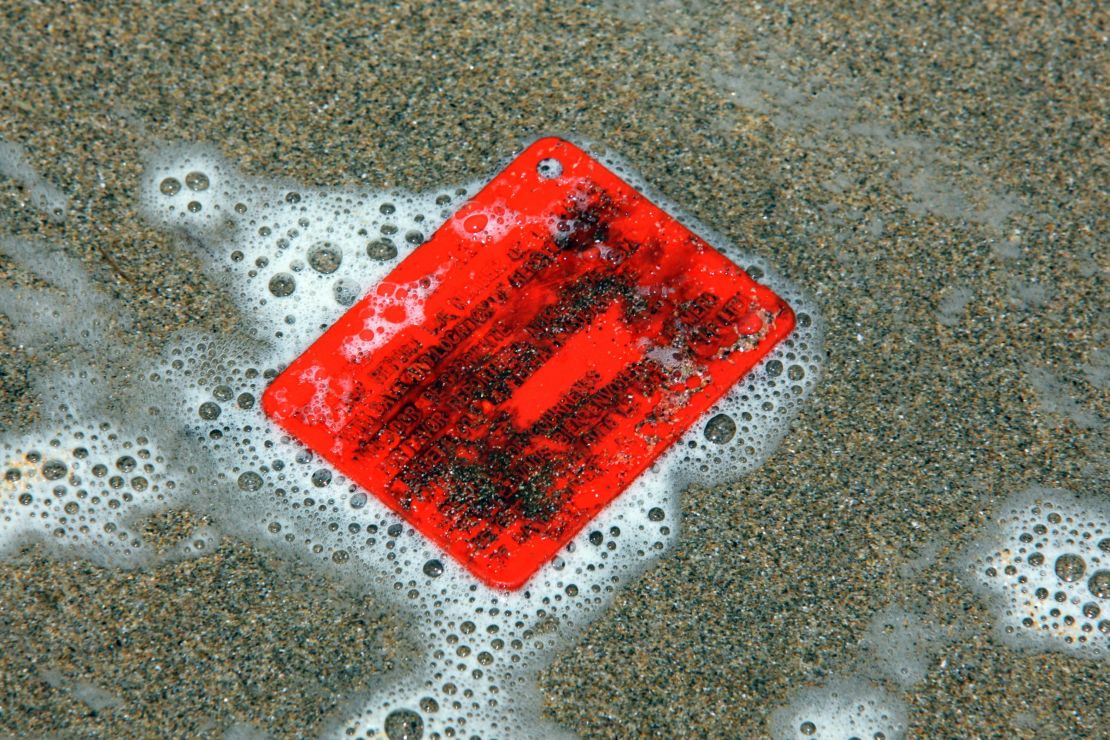 March 6, 2014 -- More than 37 years after the Argo Merchant grounding and oil spill, a plastic "drift card" was found by retired postman and beachcomber, Chris Easton, on a heap of marine debris on a beach near Perranporth, Cornwall, England. 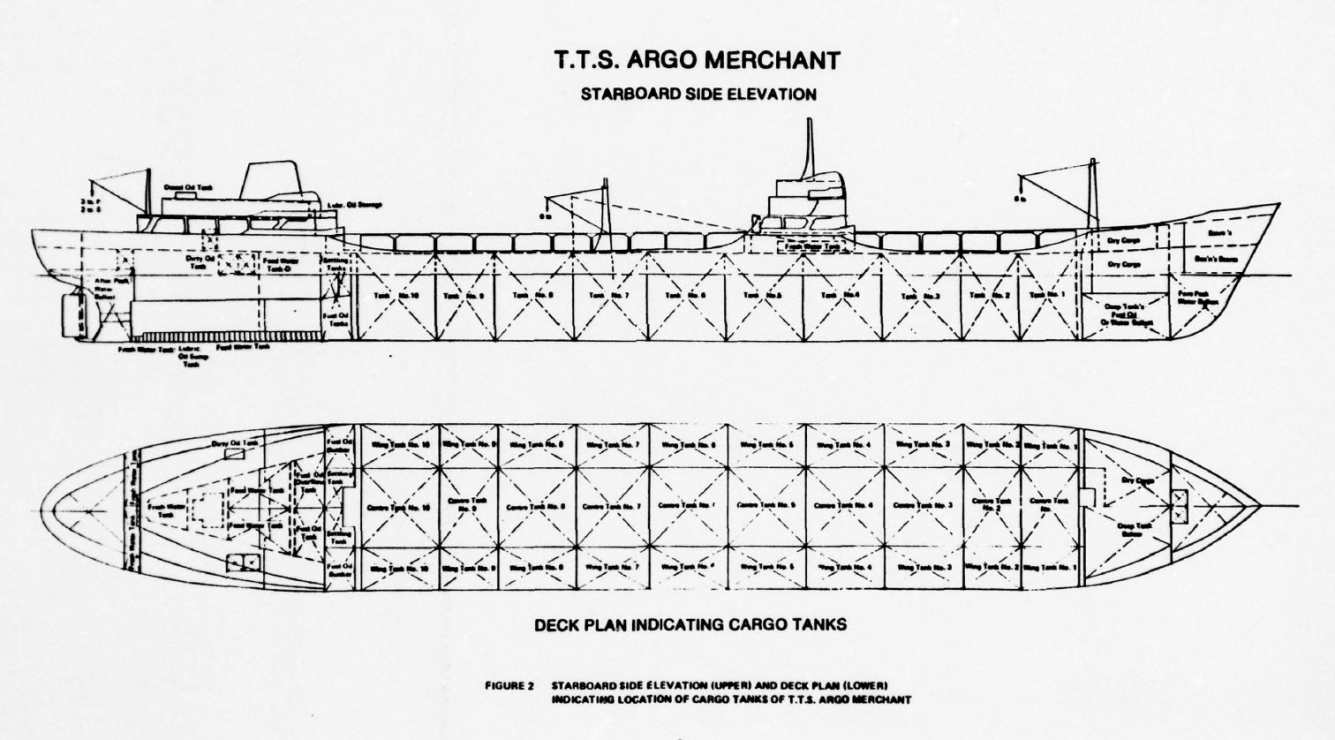 This starboard side elevation and deck plan for the TTS Argo Merchant indicates the cargo tanks. 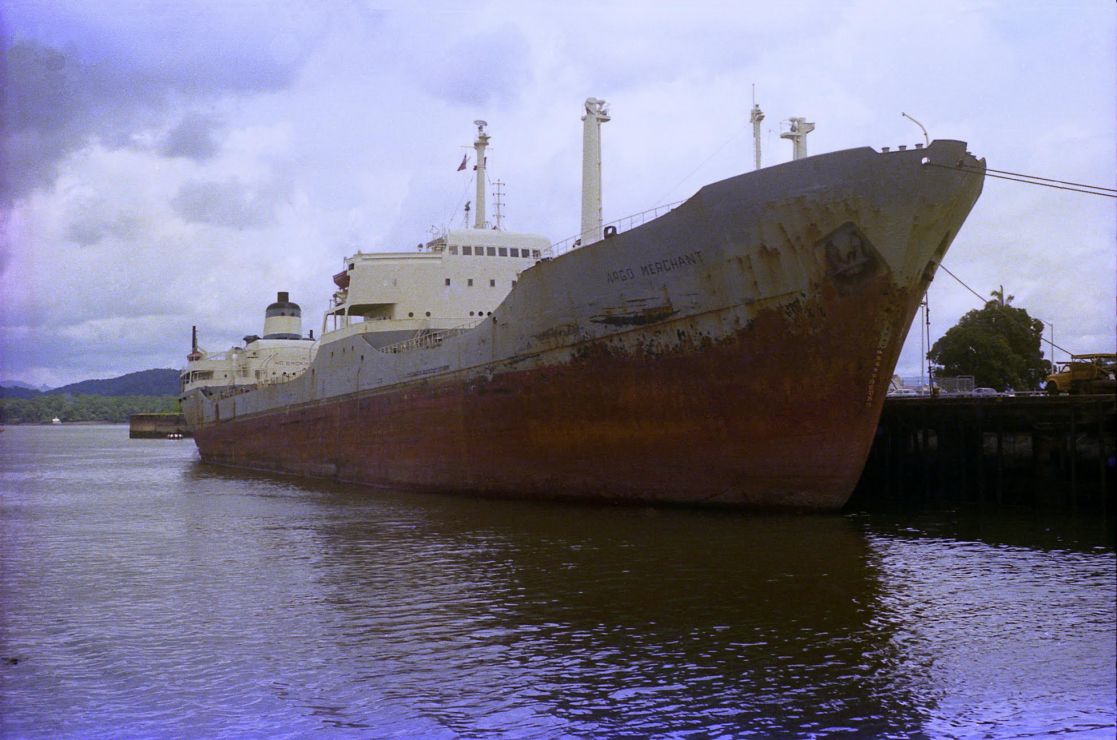 The 23-year old Argo Merchant had a history of mishaps and spills over the years, including two other groundings. It had been described as "an old and poorly managed ship."

It departed Venezuela on Dec. 3, 1976 and was expected to arrive at Boston, Mass., 10 days later but was delayed by weather and mechanical problems.

The U.S. Coast Guard planned to board and inspect the vessel in Boston, but of course, the vessel never made it to port.

This view of the Argo Merchant was captured at Balboa, Panama City, Panama earlier in 1976. 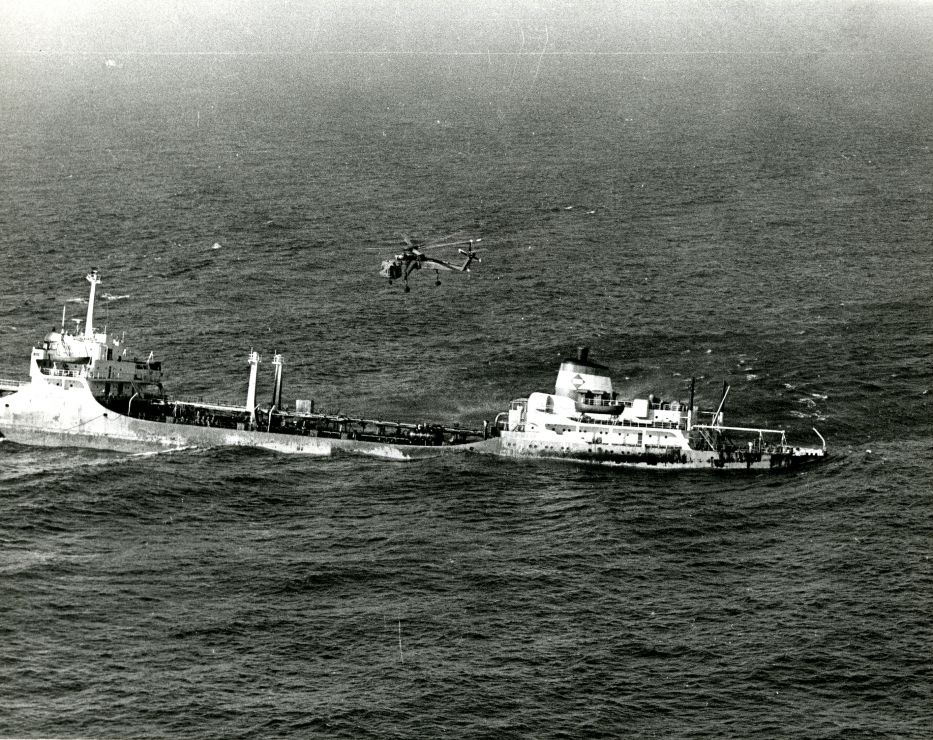 After its crew evacuated, the tanker broke apart and spilled its entire cargo of fuel. 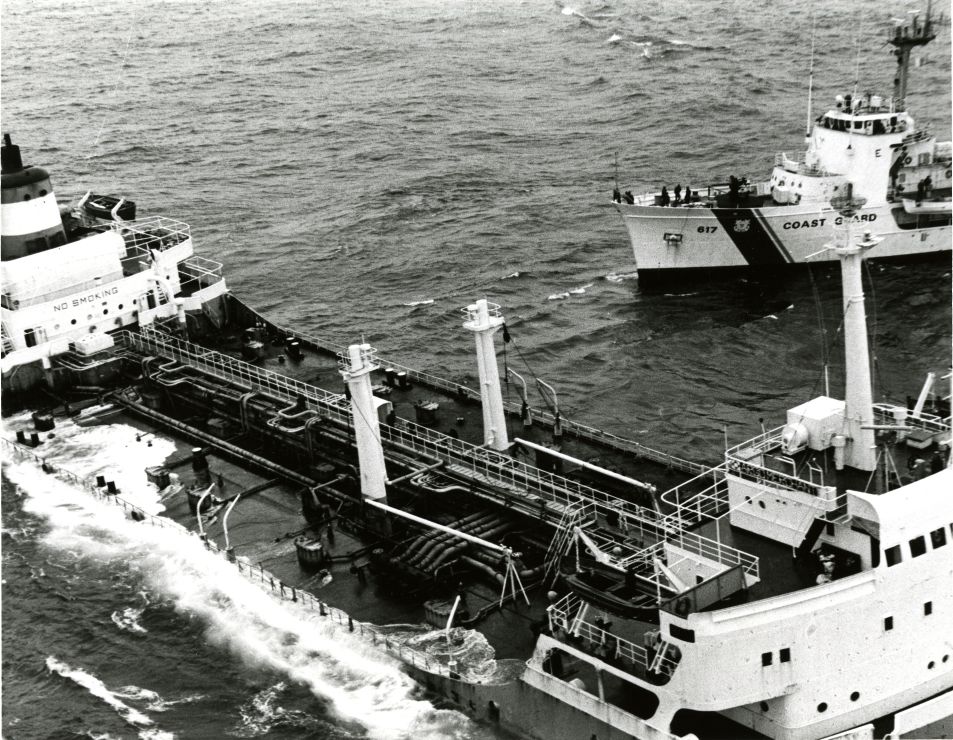 The shallow waters and weather conditions made it impossible to offload the oil or salvage the Argo Merchant. 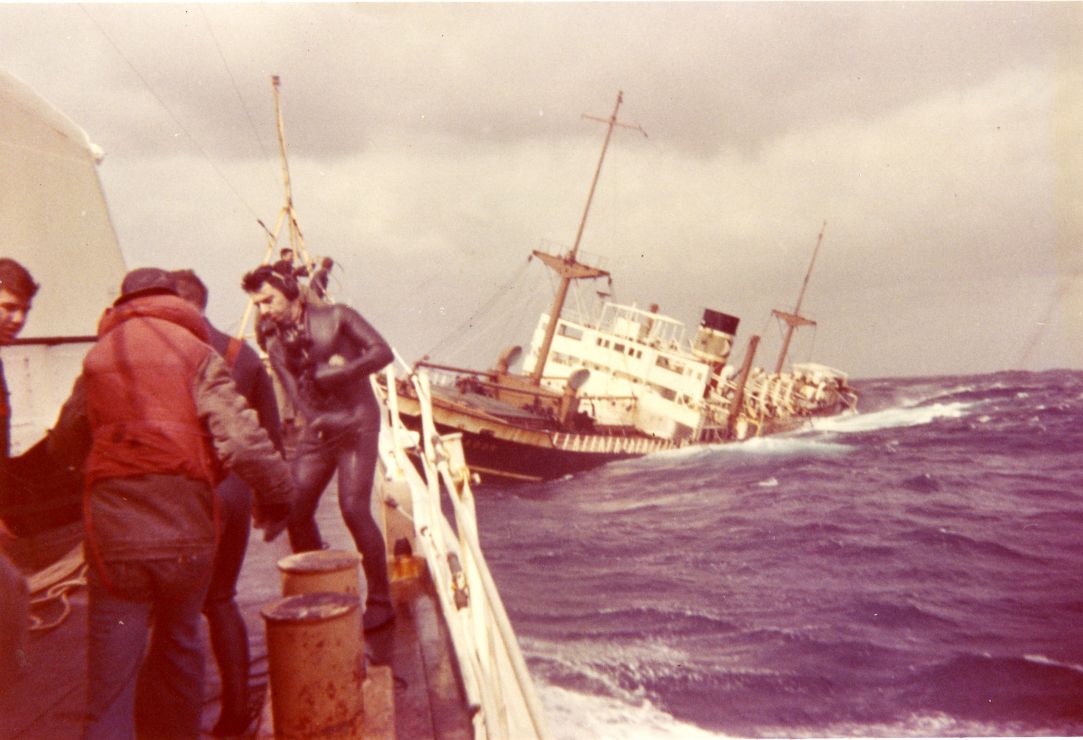 Attempts to treat the oil were ineffective. Emergency crews tried to burn the oil but the fire did not spread as hoped. 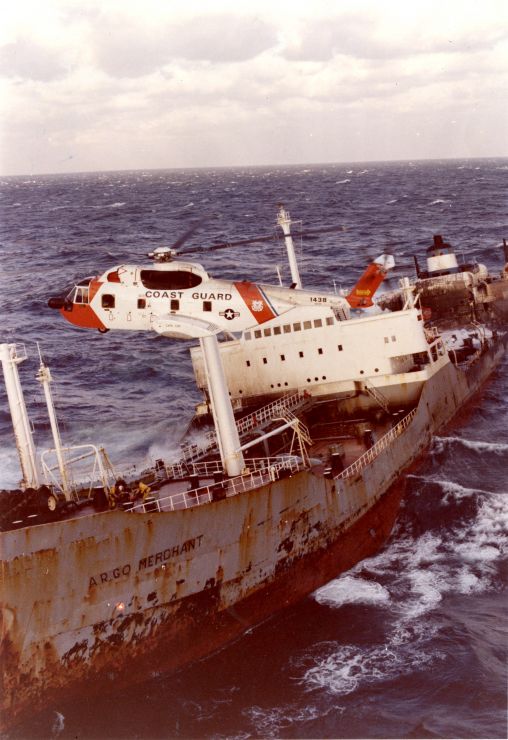 Helicopters from Coast Guard Air Station Cape Cod, Mass., lifted the 38 crewmembers of the Argo Merchant to safety on Dec. 15 and 16, 1976. 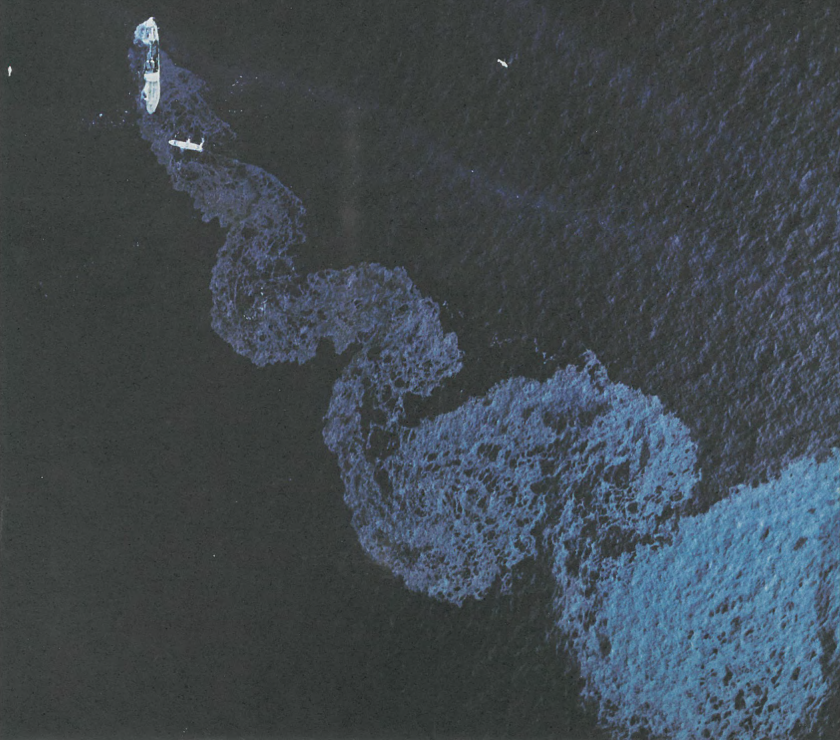 The vessel has been the subject of a book, Hard Aground: The Story Of The Argo Merchant Oil Spill, and was featured in the "worst ship" category in the 1979 publication, The Book of Heroic Failures. 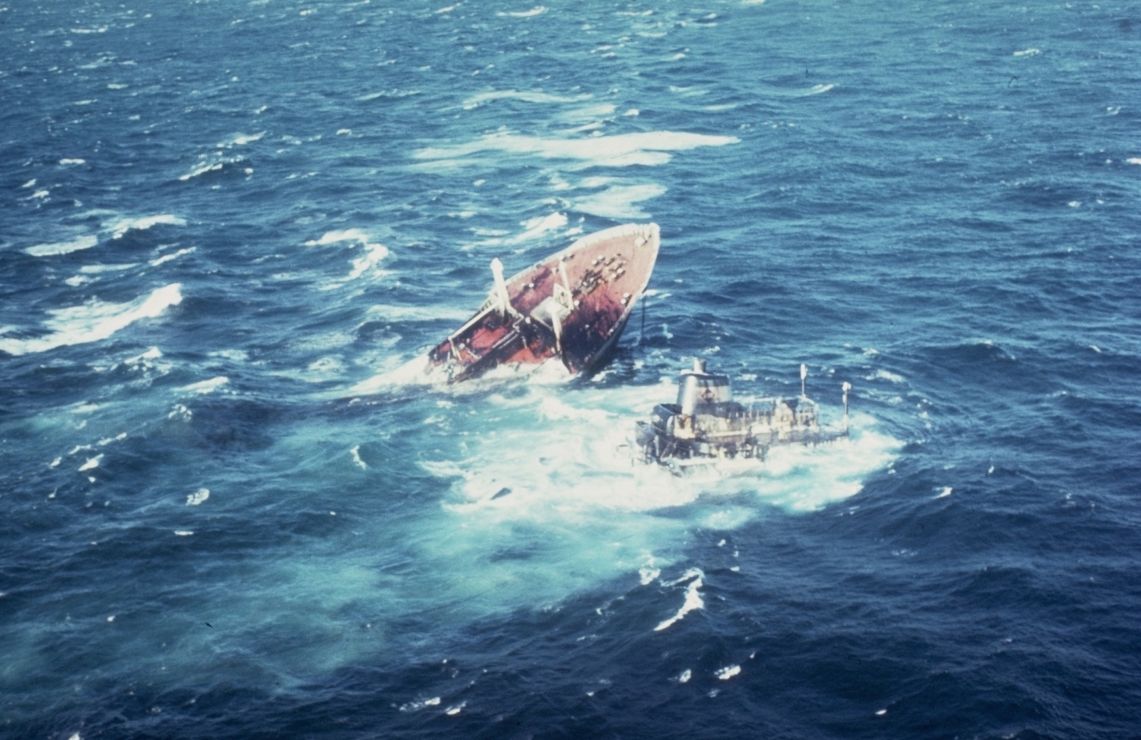 The bow section drifted 400-500 yards to the southeast and was eventually sunk by the U.S. Coast Guard, while the stern section remained aground. 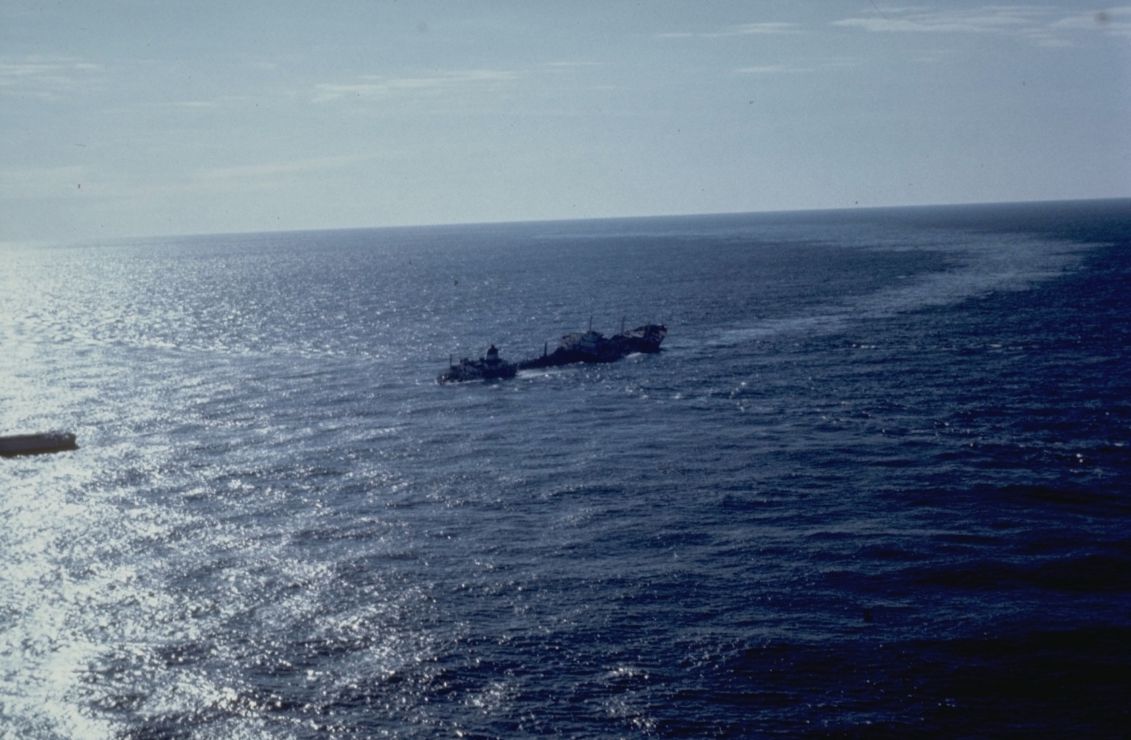 The spill posed a threat to the Georges Bank, a huge and historically productive fishing ground used by fishermen from New England and Atlantic Canada.

The resources that were at risk from the impacts of the oil included the region’s commercial fisheries, fish and marine mammals in the region of the spill, and diving coastal birds. 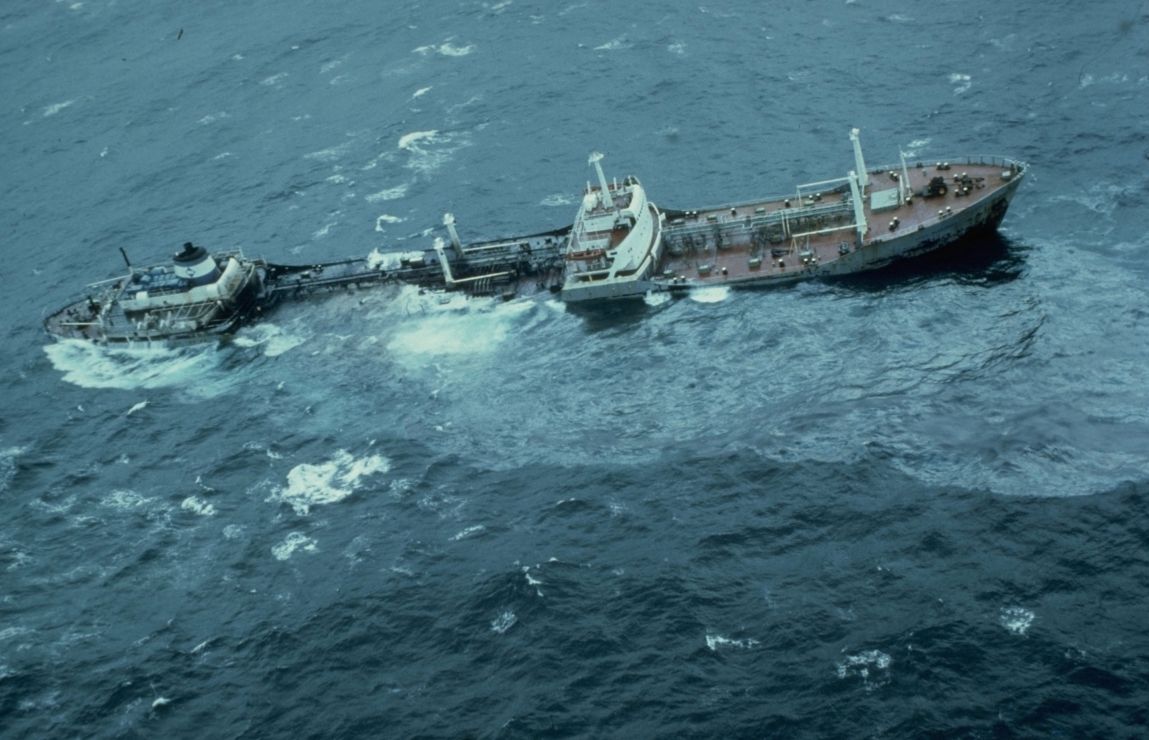 The ship’s master requested permission to dump cargo in an effort to control draft and re-float the vessel.

Permission was denied and attempts to lighter and re-float the vessel using emergency pumps and an anti-pollution transfer system were unsuccessful. 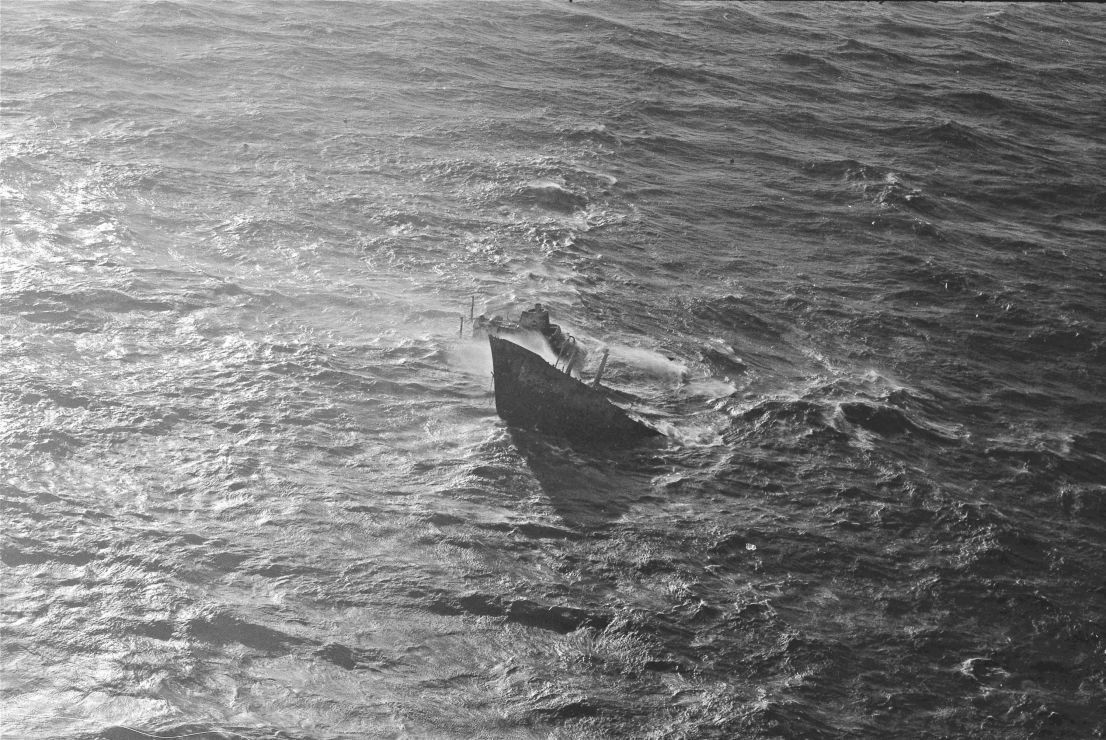 The incident is still one of the largest oil spills in U.S. history, and one of the first spills where NOAA had a significant scientific response role.

The Argo Merchant wreckage remains on the shoal today. 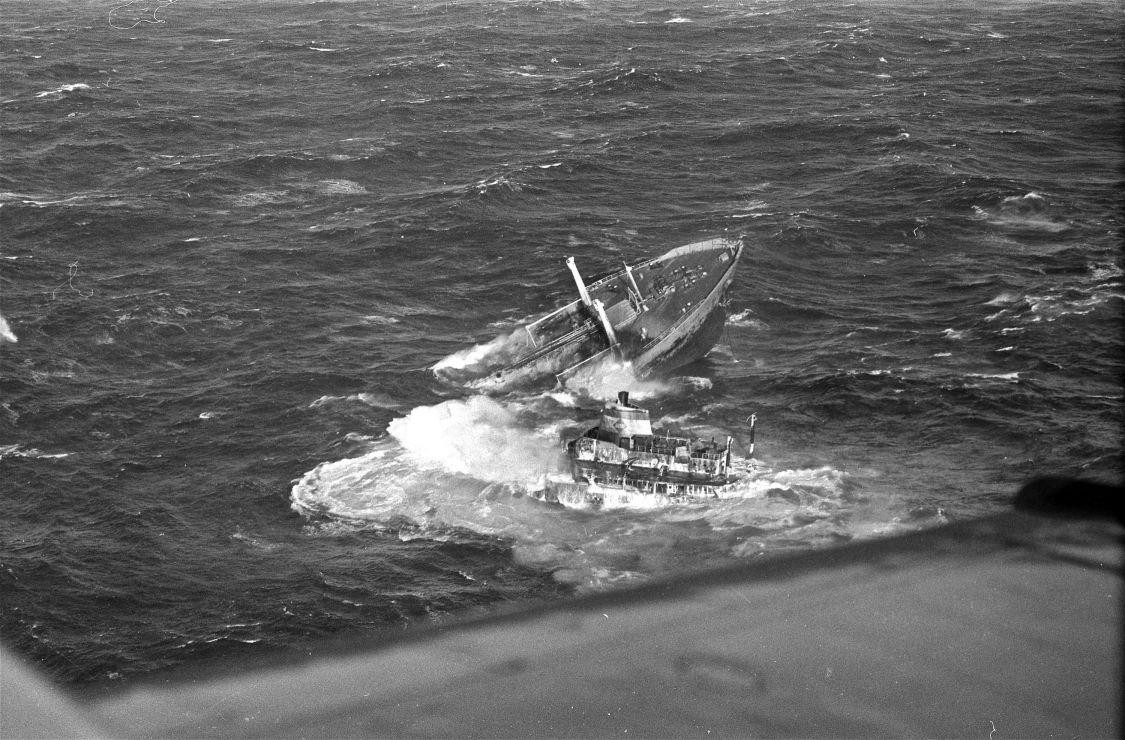 On December 17, 1976, the vessel began to pivot clockwise and buckle.

On December 21, the vessel broke in two, spilling approximately 36,000 barrels of cargo.

The bow section split forward of the bridge and capsized on December 22, resulting in the loss of the remaining cargo. 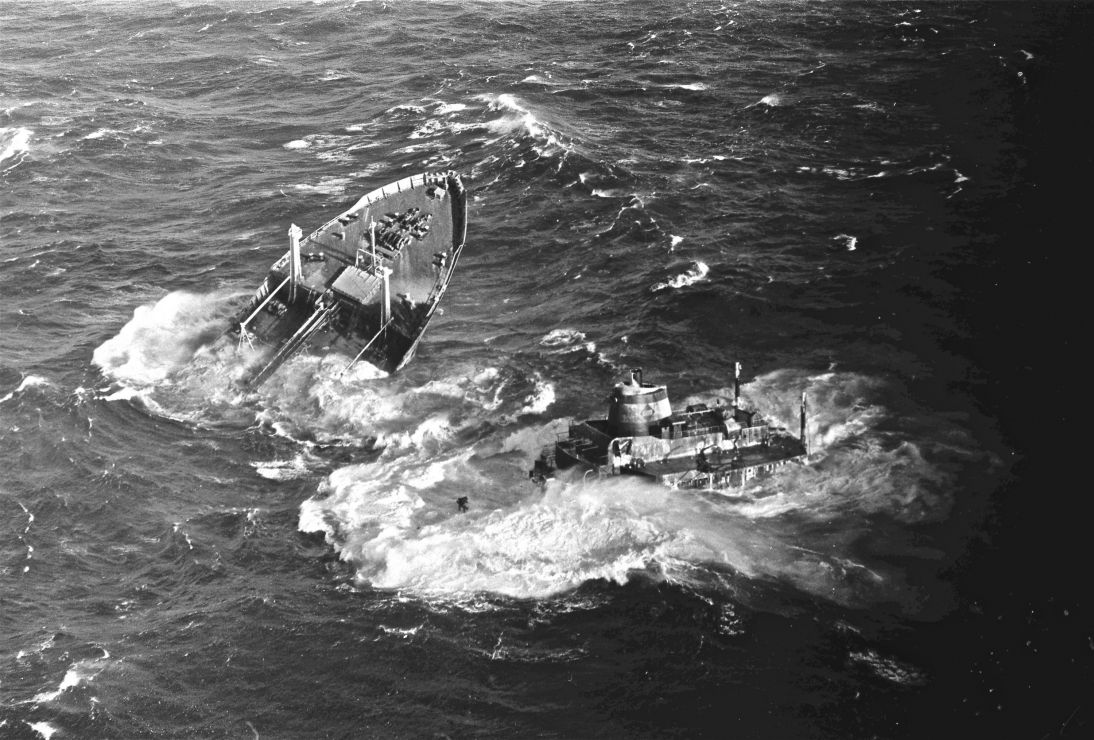 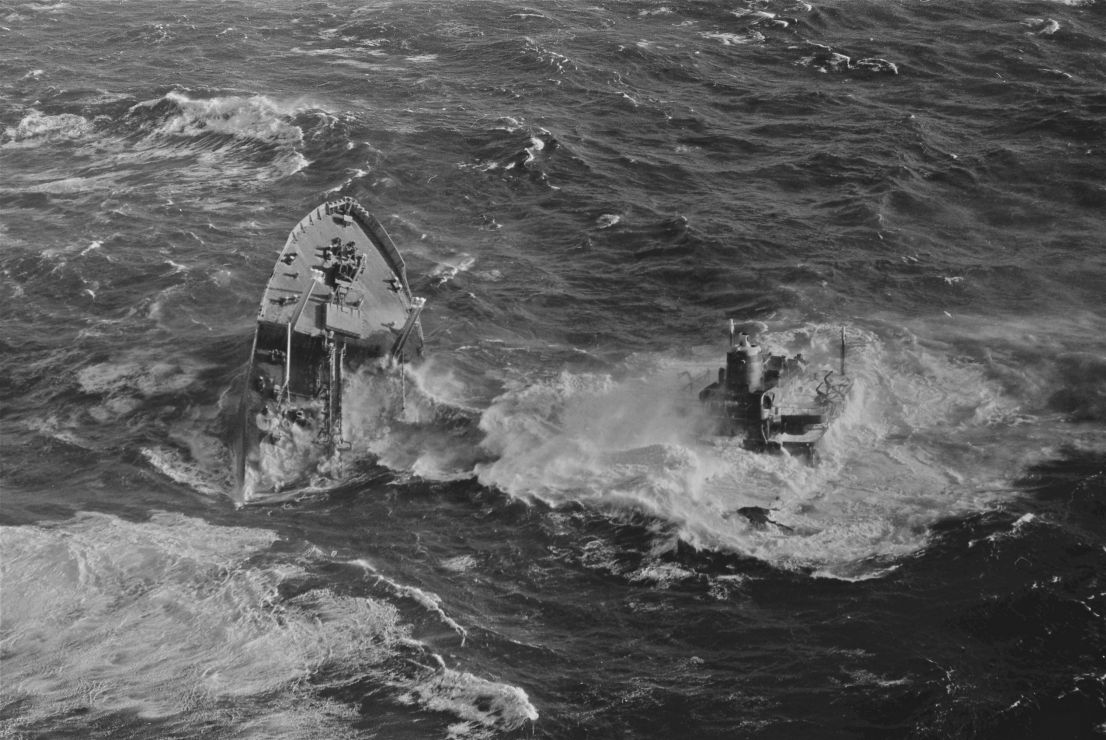 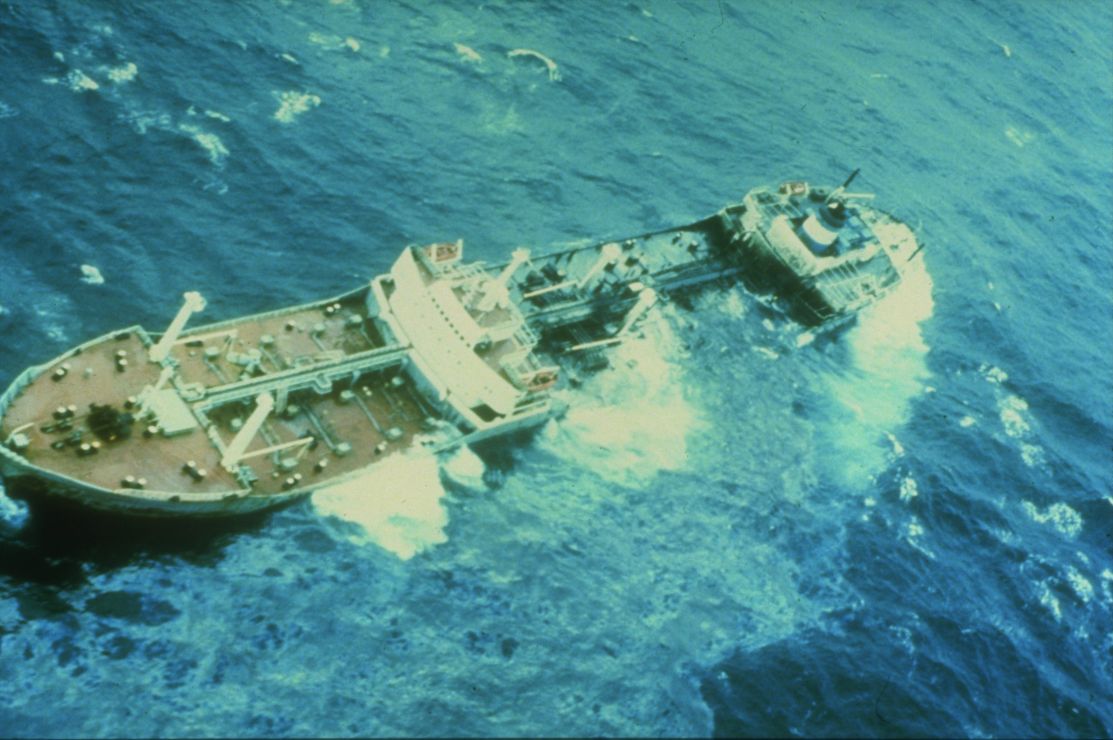 The following day (December 16, 1976), the weather worsened and the 38-member crew of the Argo Merchant was evacuated. 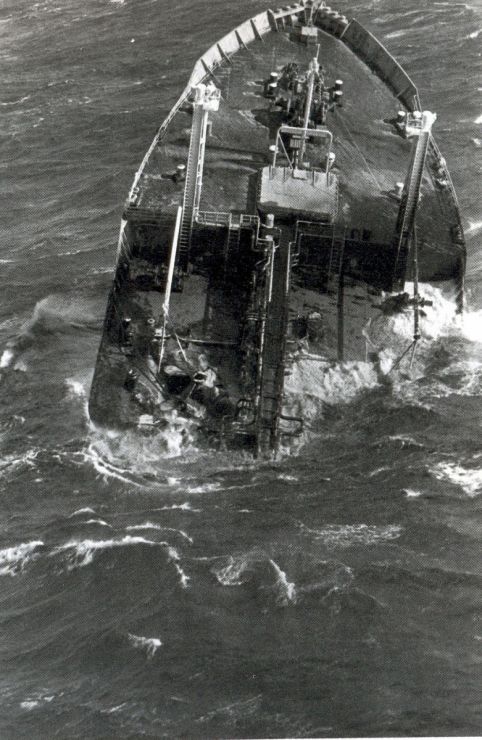 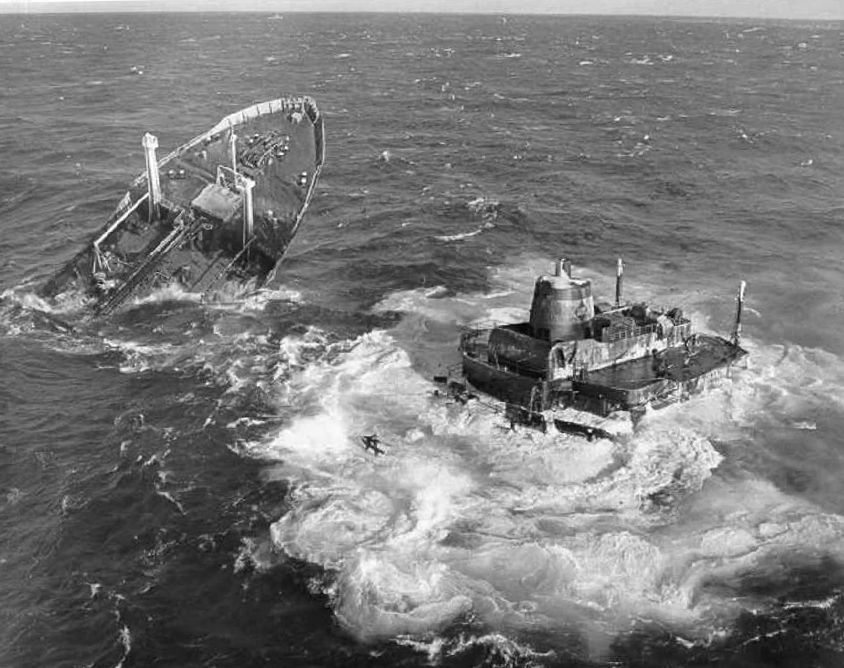 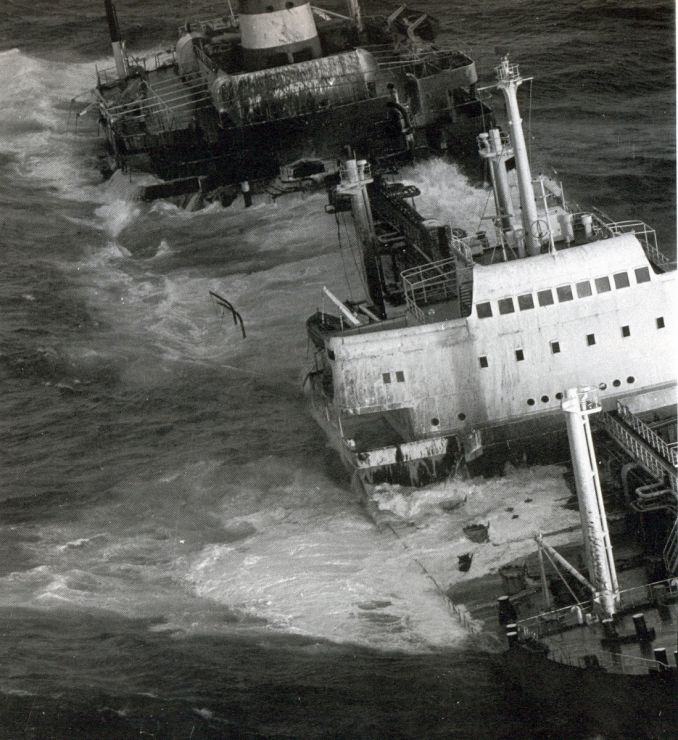 When the Argo Merchant ran aground, it was carrying 7.7 million gallons of No. 6 fuel oil, a heavy refined oil.

Its grounding was due to navigational errors. The vessel was found to be 24 miles off course, and carrying two unqualified crew as helmsman, a broken gyrocompass, outdated maps, and an inaccurate radio direction finder. 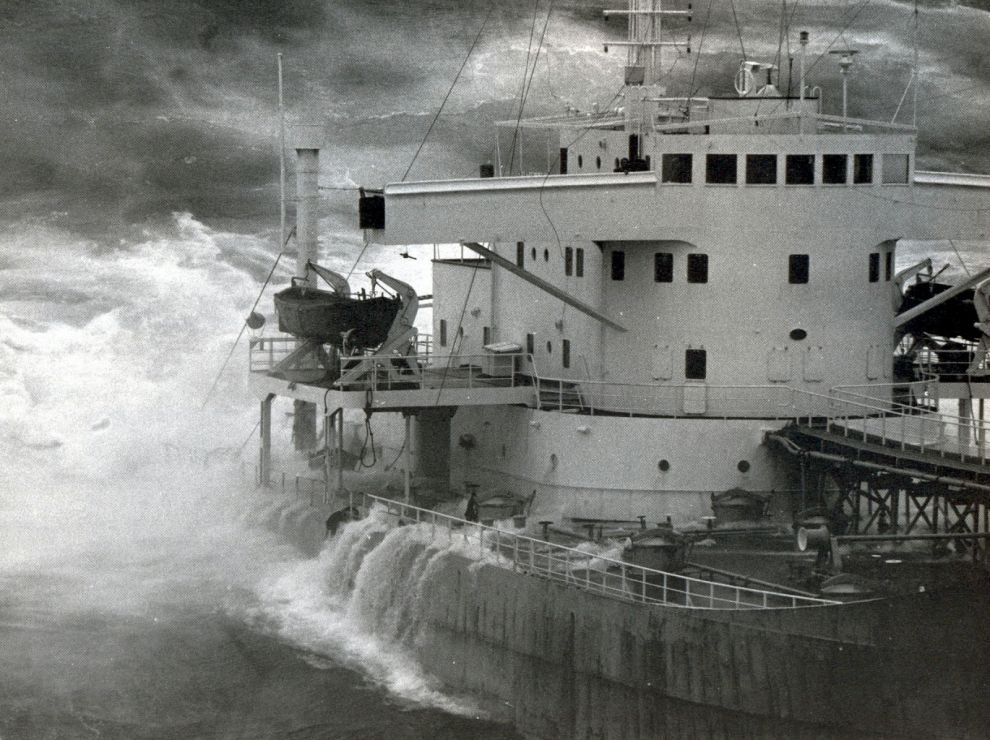 On December 15, 1976, the Liberian tanker Argo Merchant ran aground on Nantucket Shoals, off the Massachusetts coast, in high winds and ten foot seas.

Its destination was Salem, Mass., where the tanker was scheduled to deliver a winter's supply of fuel to a local power plant.

Credit: Coast Guard Historian
Download Original
Previous Pause Next
1 of 26
Back to top