This is sixth in a series of six stories examining the oil spill in 1976 of tanker Argo Merchant resulting in the creation of the Office of Response and Restoration. 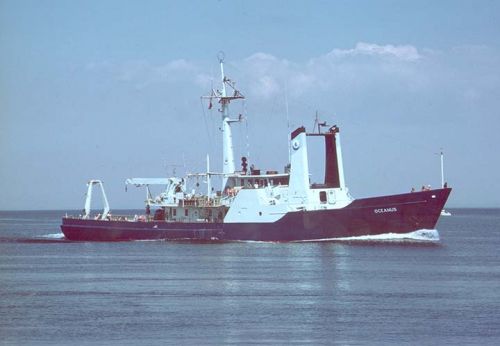 The scientific community at Woods Hole Oceanographic Institution (WHOI) responded to the oil spill from tanker Argo Merchant on Dec. 15, 1976, out of a sense of public responsibility to assist in minimizing adverse effects on Georges Bank and nearby coastal regions. This was driven by a heightened awareness among scientists and the general public of humankind’s abuse of the environment. The first Earth Day had occurred six years earlier in 1970.

In addition, WHOI wanted to learn more about oil spills in the marine environment. It is important to view the scientific response to this oil spill within a broad framework of other ongoing activities. The United States government, through the Department of the Interior’s Bureau of land Management (BLM), had just initiated a Baselines Study Program in the U. S. Outer Continental Shelf areas in anticipation of potential leasing, exploration and development activities, including the Georges Bank area. 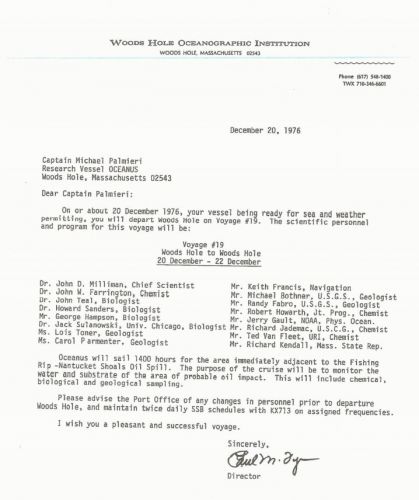 Fig. 1. Authorization letter from the Woods Hole Oceanographic Institution director for the Dec. 20, 1976 cruise to the Argo Merchant spill with the ships roster of scientists. Credit: WHOI

Because of these activities and ongoing concerns about oil tanker and barge accidental spills, the United States Coast Guard and NOAA had developed a contingency plan for assessment responses that included other federal agencies. They also reached out widely to academic scientists and others in the region with possible experience and resources to bring to spill studies.

Several researchers at WHOI, led by Max Blumer, Howard Sanders, and John Teal, had been studying the fate and effects of two No. 2 fuel oil spills in Buzzards Bay, Massachusetts — one in 1969 and another in 1974. I joined these efforts as a postdoc in Blumer’s laboratory in 1971 after conducting research on chronic oil pollution in Narragansett Bay with my advisor, Professor James G. Quinn in the Graduate School of Oceanography (GSO) at the University of Rhode Island (URI). WHOI researchers, along with colleagues at the United States Geological Survey and National Marine Fisheries Service, had been studying the Georges Bank region for years. ERCO, a consulting company funded by the BLM, was spinning up measurements of petroleum hydrocarbons in the Georges Bank ecosystem led by Paul Boehm, a recent graduate of Professor Quinn’s laboratory.

Thus, when phone calls came in from the NOAA folks in the first days after the spill, there were meetings of the aforementioned groups, already familiar with each other’s capabilities, planning what should, and could, be done from a research response. The Coast Guard and NOAA were on the front lines of the spill, innovating frequently for unanticipated situations and keeping all research groups informed of conditions at the scene. 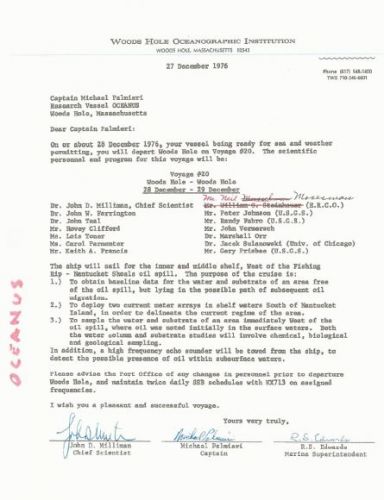 Fig. 2. Authorization letter from the Woods Hole Oceanographic Institution director for the Dec. 28, 1976 cruise to the Argo Merchant spill with the ships roster of scientists. Credit: WHOI

The WHOI vessel R/V Oceanus was on a research cruise in the nearby North Atlantic. The WHOI leadership recalled the vessel and it sailed for the area near the spill site on Monday, Dec. 20. Sedimentologist John Milliman was the chief scientist and wrote about the cruise in 1977 in OCEANUS magazine. The mix of scientists on board (see Fig. 1) included NOAA physical oceanographer Jerry Galt. Our local Massachusetts State Representative Richard Kendall came with us, proving a valued liaison with state government.

After only a few samples were obtained, a winter storm struck and forced us back to Woods Hole early on Dec. 21. The Oceanus sailed on a second cruise Dec. 28-29, 1976 (see Fig. 2 for the list of scientists on board). Thereafter, R/V Oceanus’ sister ship, R/V Endeavor — new and just delivered to GSO-URI— took over the task for academic research cruises. In short, fortunately the wind and water circulation pushed much of the spilled oil away from nearby coastal areas and away from Georges Bank, thereby minimizing adverse effects in the region.

A debt of gratitude is owed by all to the Coast Guard and NOAA personnel responding to the Argo Merchant spill. They devoted many hours during the December 1976-January 1977 holiday season to this pioneering effort which informed future oil spill responses.