JUNE 9, 2016 -- On June 3, 2016, 16 Union Pacific unit train rail cars carrying Bakken crude oil derailed in Mosier, Oregon, on the Columbia River. Four of the rail cars, each carrying approximately 28,000 gallons of oil, were breached and caught fire. The volume released from the rail cars is unknown.

The spill impacted Rock Creek, home to coho salmon and steelhead, both of which are federally listed as threatened species. No oil was released directly into the Columbia River, but a small sheen was observed on the river.

A week into the spill, residents evacuated from Mosier have returned home, and the response is transitioning into a longer term cleanup phase to address oil released into the environment. Further assessment is needed to understand the nature and extent of contamination and potential impacts to natural resources. 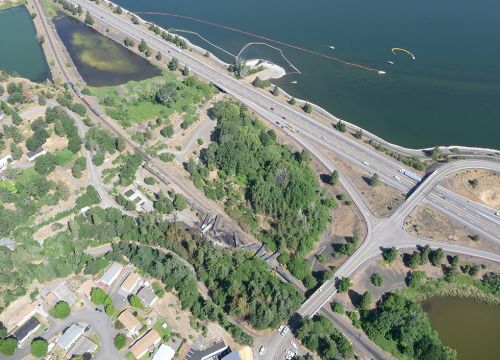 Aerial view of the site of the oil train derailment and fire and response operations along the Columbia River near Mosier, Oregon. (Washington Department of Ecology)
Return to OR&R Weekly
Back to top