OCTOBER 11, 2021 ─ We had a shared idea to create an oceanographic/meteorological buoy system that could be deployed by a relatively small vessel to support scientific research and emergency response.  We thought, “There could be so many uses in support of NOAA and NOS missions if we only had such a buoy.”  If a critical fixed monitoring station was damaged during a major hurricane and there was a need for real-time data, the buoy could be deployed as a temporary monitoring device. 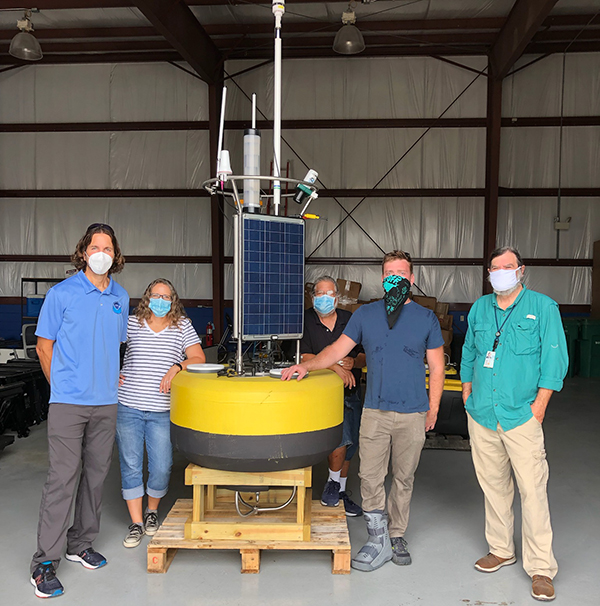 The buoy could be used to support salvage operations and oil spill response and cleanup operations where real-time current data would assist with planning and operational decision making.  Such a buoy couldn’t be created during an emergency – there would not be time, so it would have to be built in advance and positioned to be ready and available as a NOAA scientific asset during a disaster event.  You would also need two for redundancy so that there would always be at least one available.  This same system could also be used to support coastal research studies and as a tool for outreach as well.

The more we talked about this idea, the more we wanted to make it a reality.  The “we” are the Center for Operational Oceanographic Products and Services (CO-OPS) and the Office of Response and Restoration (OR&R), two different program offices within the National Ocean Service.  That idea, with a lot help from many different NOAA staff resulted in two identical Currents Real-time Buoys (affectionately known as CURBY) being designed and built by CO-OPS in Chesapeake, Virginia using funds provided by the Disaster Preparedness Program’s Lagniappe Funding that provides limited funding opportunities to enhance National Ocean Service disaster preparedness.

For more information on CURBY #1 and CURBY #2, contact Grace.Gray@noaa.gov or Charlie.Henry@noaa.gov.