The trustees implemented four major restoration projects focusing on restoring estuarine and shoreline habitat and shellfish in the Port Madison/Indianola area in Puget Sound. A large area of the Doe-Kag-Wats marsh, located on the Suquamish Tribe Reservation lands, is covered by wood washing onto the shore over many years. Trustees are improving habitat quality by removing creosote-contaminated wood, selected large woody debris (LWD), and marine debris impacting the biological community of the marsh. A large LWD removal project took place in early May, involving log removal by helicopter and field crews. Monitoring will take place to measure the ecological response of the marsh following LWD removal. Examining the changes to the marsh from removing the LWD may have benefit throughout Puget Sound where other similar projects are being considered. 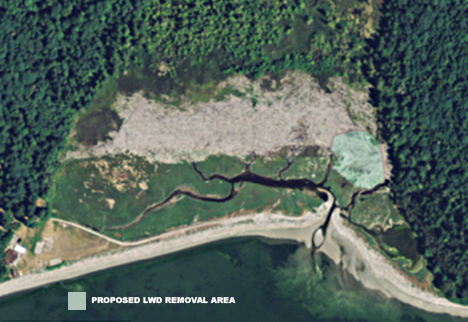