This is first in a series of six stories examining the oil spill in 1976 of tanker Argo Merchant resulting in the creation of the Office of Response and Restoration. 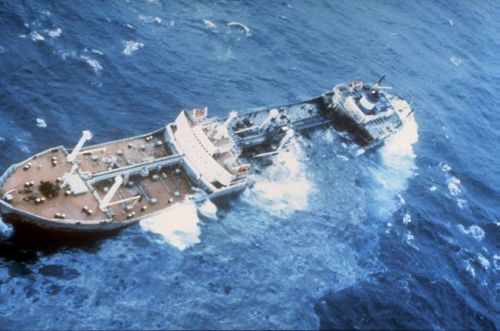 Despite attempts to refloat the tanker, the Argo Merchant split in half in strong winds and high waves, spilling more than 7.5 million gallons of oil. It was the largest oil spill in United States history at the time.

In responding to the grounding and oil spill, the U. S. Coast Guard (USCG) was overwhelmed with competing, and often conflicting, scientific recommendations. The Coast Guard asked NOAA’s recently formed Spilled Oil Research Team to serve as its scientific adviser and unofficial liaison with the scientific community.

As a result of that collaboration, NOAA formed the Hazardous Material Response Division, now the Emergency Response Division (ERD) of the Office of Response and Restoration (OR&R). Scientific Support Coordinators were strategically located across the country. ERD now represents NOAA as the primary scientific support during oil and hazardous chemical spills as indicated in the National Contingency Plan. ERD also provides annual trainings to prepare government and industry responders and planners for future spills.

In the wake of Argo Merchant, trajectory and fate modeling programs were developed to further assist USCG with spill response. OR&R currently has a suite of preparedness, response and assessment tools for oil spills and chemical spills to support responders and planners. NOAA also created standard methods for damage assessment after oil spills following the Argo Merchant; this activity is now carried out by OR&R’s Assessment and Restoration Division (ARD). Today, ARD provides environmental protection during cleanup and conducts Natural Resource Damage Assessments. ARD is also a partner in Damage Assessment, Remediation and Restoration Program (DARRP) a collaboration among OR&R, NOAA General Counsel, and the National Marine Fisheries Restoration Center.

The sinking of the Argo Merchant was NOAA’s first coordinated oil spill response. Today, the Office of Response and Restoration is a center of expertise in preparing for, responding to, and evaluating threats to coastal environments including oil spills. OR&R is looking back on the 40 years following Argo Merchant this week, highlighting the history of emergency oil spill response and assessment, the advances that have been made and what a response would look like if Argo Merchant ran aground today.