JULY 19, 2021 ─ Last week NOAA and partners concluded a comprehensive fish sampling effort to evaluate the relationship between contaminant concentrations and the growth of fish at the Portland Harbor Superfund site. 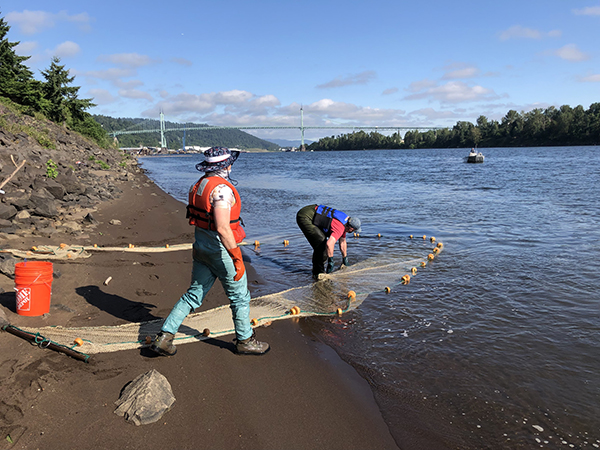 The four-week continuous effort to collect juvenile resident fish species from the site was at about the halfway mark when the collective decision was made: the current team had no other option but to stand down. With air temperatures in Portland set to top triple digits for consecutive days on June 26 and 27 (at 108 F and 112 F degrees respectively), it was clear conditions were no longer safe for the field team to continue working.

Furthermore, the ESA permit issued by the Fisheries Service would not allow for beach seining with water temperatures far exceeding the tolerance threshold for threatened juvenile Chinook salmon, which had still been present in the system in recent days. Air temperatures ultimately peaked at 116 degrees on the 28, the result of an unprecedented high pressure heat dome over the Pacific Northwest. So a pause ensued with work only partially completed and only a little more than a week available to complete sampling. At this point, it wasn't even clear if it would be possible for work to resume.

Fortunately, temperatures normalized to an extent and the Fisheries Service determined that work could resume given the likelihood that the last remaining juvenile Chinook had either moved on or, if not, perished as a result of water temperatures pushing 80 degrees.

So on July 1, the incoming team was back on the water, now starting their days at 5:00 a.m. in order to avoid the heat of the afternoons and optimize chances for catching fish. When work wound down on July 9, the remarkable success of the effort had become apparent: the goal had been to sample 39 shoreline units for up to four target species with a quota of at least 10 fish of the same species at all stations. That was always a tall order, which is why four weeks were allocated to the effort. By the end of the sampling period, the teams caught 10 peamouth chubs at each of 28 sampling units and 9 at an additional sampling unit, plus 4-7 fish at each of several other stations. Also caught were juvenile starry flounder at several stations, including two stations with more than 10 fish each. Thus a robust set of fish were collected to enable testing of the relationship between contaminant concentrations in whole bodies and otolith growth, and also examine relationships with relative sediment contamination levels.

The level of effort, teamwork and shear tenacity required to implement this plan were significant and entailed contributions from numerous individuals and organizations including OR&R's Assessment and Restoration Division, Business Operations Division and Headquarters Staff; the NOAA Northwest Fisheries Science Center; the NOAA Restoration Center; the Fisheries Service Office of Protected Resources; Industrial Economics, Inc.; Cramer Fish Sciences; and the Oregon Department of Fish and Wildlife.