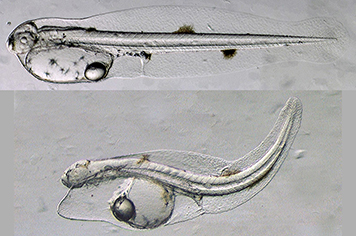 A normal yellowfin tuna larva not long after hatching (top), and a larva exposed to Deepwater Horizon crude oil as it developed in the egg (bottom). The oil-exposed larva shows a suite of abnormalities including excess fluid building up around the heart due to heart failure and poor growth of fins and eyes. (NOAA)

NOAA research following the Deepwater Horizon disaster in the northern Gulf of Mexico examined the potential for the spilled crude oil to damage the developing hearts of fish and thus impact fish populations and commercial fisheries.

Studies found that concentrations of crude oil measured in Gulf spawning habitats could cause cardiac-related deformities in commercially important species including bluefin and yellowfin tuna and mahi mahi.

The research built on earlier findings from the 1989 Exxon Valdez spill indicating that oil-derived chemicals (polycyclic aromatic hydrocarbons, or PAHs) caused developmental abnormalities in the hearts of larval and juvenile fish that could lead to their premature death.

Crude oil from the Deepwater Horizon well rose from the seafloor through open ocean (pelagic) spawning areas for many large predatory fish, including tunas, marlin, mahi mahi, swordfish, and mackerel. In 2010 these commercially and ecologically important fish may have spawned near extensive oil slicks at the sea surface.

Estimating losses to these species from oil-induced heart damage and developmental abnormalities has been a primary objective for the Deepwater Horizon natural resource injury assessment. NOAA scientists collaborated with academic researchers at Stanford University and the University of Miami to address these questions.

First, the team compared the effects of Exxon Valdez and Deepwater Horizon crude oils on zebrafish, a model laboratory species. The two oil types produced nearly identical defects in heart contraction and formation, suggesting that injury to the developing heart was likely the greatest threat for pelagic fish spawned within the Deepwater Horizon spill zone.

Next, researchers used sophisticated methods to monitor the physiology of heart muscle cells isolated from bluefin and yellowfin tunas at the Tuna Research and Conservation Center, operated by Stanford's Hopkins Marine Station and the Monterey Bay Aquarium. The studies revealed that the cellular basis for failure in the developing heart was interference with the heart's normal cycle of excitation and contraction. The team is also evaluating the expression of genes that may be indicators of oil-induced cardiovascular injury.

Researchers then traveled to Australia and Panama to conduct experiments with the fragile embryos and larvae of bluefin and yellowfin tuna, respectively. They found that crude oil concentrations measured post-spill in Gulf spawning habitats could cause the familiar cardiac-related deformities in these species. Additional experiments at a spawning facility at the University of Miami extended these findings to mahi mahi.

Lastly, the team is studying fish exposed to low levels of crude oil as embryos that subsequently grow into juveniles and adults in clean water. Initial research has shown that subtle perturbations of the embryonic heartbeat can produce permanent changes in heart shape that negatively affect swimming performance and other behaviors critical for fish survival. The team has shown similar latent effects on juvenile mahi mahi, and studies are ongoing using zebrafish.