NOVEMBER 1, 2021 ─ As the temperatures start to cool and snow starts to fall, the Great Lakes region begins to warm up to the idea of winter recreational activities. Ice fishing, racing snow mobiles, enjoying the city view from half a mile offshore on a thick slab of ice are all examples of outdoor enjoyments local residents look forward to after the new year. 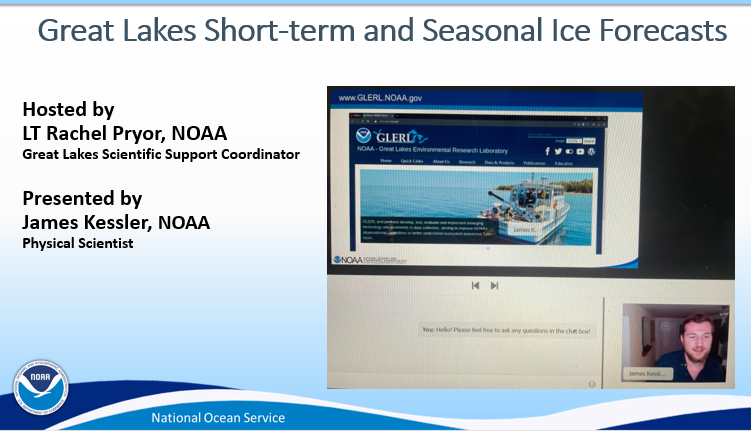 However, danger lurks in hidden cracks and crevices that cause ice flows blocking rivers and creating ice islands that break away from the shoreline leaving people stranded. In the 2020 winter season, approximately 99 people were rescued by USCG and local responders due to an ice related emergency. Why were so many people rescued? Why were people unaware of the unfavorable ice conditions?

The 2018 and 2019 winter seasons recorded higher than average ice coverage and people who enjoyed getting out on the ice sometimes assume the conditions will be the same as the previous year. For the 2020 winter season, those folks were sadly mistaken.

Short term forecasts are important to understand because ice cover can change dramatically with a cold snap or warm period. For example, in February 2021, Lake Erie ice cover jumped from less than 20% to over 80% in only 8 days. Ice coverage remained over 80% until the first of March where coverage receded back to 20% in a week. Adventurists that were out on the ice a week before, may have been unaware that the temperature warming to a mere 40F can reduce lake ice so quickly.

James did a terrific job explaining how to access NOAA’s short term and seasonal forecasts to an audience of agencies that varied from United States Coast Guard, Sault Ste. Marie Tribe of Chippewa Indians, Wisconsin Department of Natural Resources, National Weather Service, and Enbridge Inc. Additionally, the webinar included detailed descriptions of how to interpret the charts, graphs, and color schemes so the audience can learn how to use the product in a meaningful way. Great Lakes Scientific Support Coordinator LT Rachel Pryor hopes sharing GLERL’s ice forecasts and capabilities will assist in responders across the Great Lakes with preparing ice safety messaging for local residents and help to support the Coast Guard for the upcoming winter season.