Sept. 6, 2017 - While we are looking over our shoulders and keeping a close eye on Hurricane Irma's track in the Atlantic, NOAA's Office of Response and Restoration (OR&R) continues to focus on pollution from Hurricane Harvey. The storm and devastating floods that followed generated numerous oil and chemical spills and large amounts of marine debris in Coastal Texas.

Ports in the region are reopening with some restrictions, allowing commerce and industry to restart, as well as bringing in building materials and other relief supplies.

OR&R Scientific Support Coordinators continue to support command posts in the region, including Corpus Christi and Houston, as well as associated field activities.

OR&R supports the U.S. Coast Guard (USCG), which operates under the U.S. Environmental Protection Agency lead of the ESF10 Command Post for oil and hazardous materials.

OR&R scientific support has included working with USCG on a gasoline release, a grounded vessel, and a natural gas pipeline rupture.

ERMA®, the NOAA Environmental Response Management Application, is an online mapping tool that integrates both static and real-time data. Aerial imagery of the affected areas from NOAA's National Geodetic Survey (NGS) flight missions has been added to ERMA Gulf of Mexico in near real-time. Additional data and analysis will be added to ERMA as requested.

Marine debris data, including potential debris locations, types, and quantities, is being captured in ERMA. OR&R is working with U.S. Army Corps of Engineers and Texas General Land Office staff as they assess waterway debris. 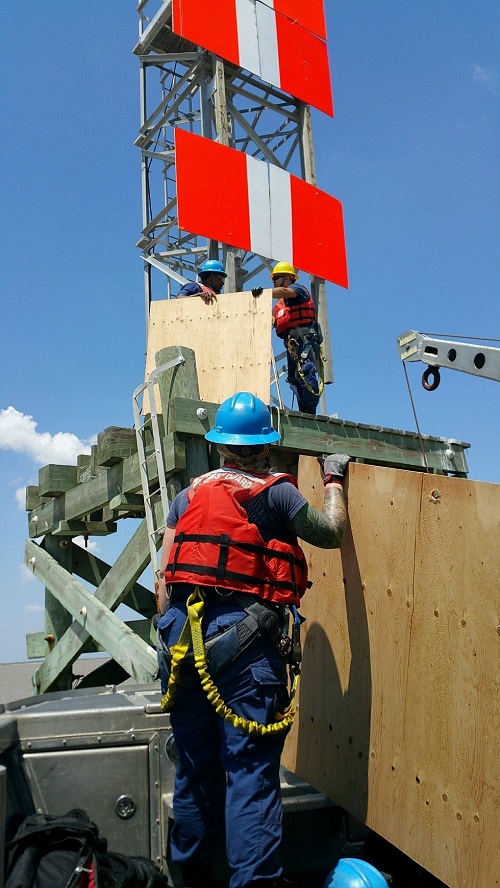 Petty Officers 3rd Class Janneh Felix and Zachary Hensley and Seaman Sara Weinrich, assigned to Aids to Navigation Team Galveston, hoist a new section of a navigational marker that was damaged by Hurricane Harvey in the lower Houston Ship Channel in Galveston, Texas, Aug. 31, 2017. The Coast Guard is working with the National Oceanic and Atmospheric Administration Office of Coast Survey and the United States Army Corps of Engineers to conduct a survey of navigational aids in the greater Houston Metro Area. Image credit: USCG.
Back to top