Aug. 30, 2017 - As the storm moves east, additional staff are arriving, and pre-deployed Office of Response and Restoration (OR&R) teams are working on issues left by the storm and floods. Currently OR&R is supporting the U.S. Coast Guard and Incident Command Posts in Corpus Christi, Houston, Port Arthur, and New Orleans. As water levels abate, the focus of these command posts will expand to include pollution and hazardous debris issues.  Additional teams are scheduled to arrive in Houston later this week.

OR&R addresses issues such as marine debris, as well as oil and chemical spills in the coastal environment. OR&R provides scientific support to the U.S. Coast Guard at coastal disasters.

NOAA plays a major role in hurricane response on the nation’s coasts. NOAA's National Weather Service is on the front line as the trusted, round-the-clock source of information about severe weather threats. Emergency managers and the public alike depend on them to provide accurate and timely storm predictions and forecasts.

Here are links for more information on Tropical Storm Harvey:

What DHS and FEMA are Doing

What the U.S. Government is Doing 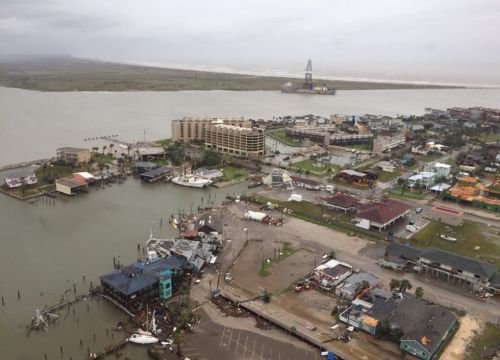 Coast Guard conducts a fly over of the Port Aransas area after a search and rescue mission, Saturday, August 26, 2016. The aircrews were launched to assist people in distress aboard the vessels Sabine Pass, Sandy Point, and Signet Enterprise. Coast Guard photo by Air Station Corpus Christi.
Back to top