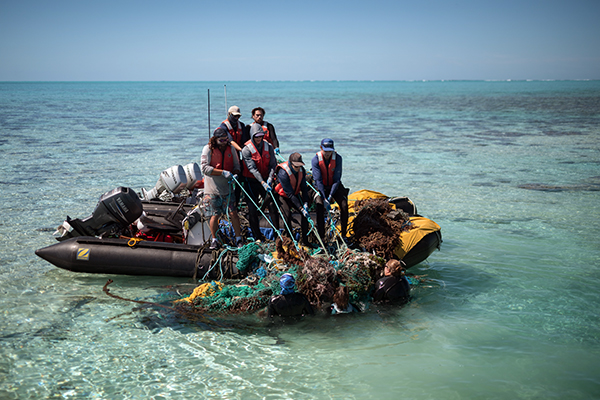 A marine debris removal team pulls a large net mass out of the waters of Midway Atoll. Image credit: NOAA.

Aboard the charter vessel IMUA, the crew from the NOAA Pacific Islands Fishery Science Center (PIFSC) and PMDP is aiming to remove 115,000 pounds of derelict fishing gear from shallow coral reef environments and shorelines. Removal efforts will focus on areas where debris accumulates in high densities and/or where debris poses a high threat of entangling protected species. In addition to removing debris, the crew will survey and assess the distribution of marine debris, its rates of marine debris accumulation, and its impacts on habitat and species. The mission will also increase public awareness of marine debris issues through communication and outreach.

Papahānaumokuākea is a sacred landscape that is integral to Native Hawaiian culture. The monument is also home to endangered, endemic, threatened, and protected marine species,  including the threatened Hawaiian green sea turtle, endangered Hawaiian monk seal, and the critically endangered Laysan duck. In December of 2020, Congress directed NOAA to initiate the process to designate Papahānaumokuākea Marine National Monument as a national marine sanctuary under the National Marine Sanctuaries Act.

The mission is led by the Pacific Islands Fisheries Science Center and funded by the NOAA Marine Debris Program and NOAA Damage Assessment Remediation and Restoration Program, with additional support from PMDP, the U.S. Fish and Wildlife Service, the State of Hawai‘i, NOAA’s Office of National Marine Sanctuaries, and other NOAA programs.

During the mission, you can follow NOAA PIFSC’s Twitter and Facebook accounts for pictures and progress updates. On September 22, the mission will return to port at the NOAA Daniel K. Inouye Regional Center, where the collected debris will be sorted and disposed of.