This feature is part of a monthly series profiling scientists and technicians who provide exemplary contributions to the mission of NOAA’s Office of Response and Restoration (OR&R). This month’s featured scientist is Caitlin Wessel, OR&R Marine Debris Program regional coordinator for the Gulf of Mexico. 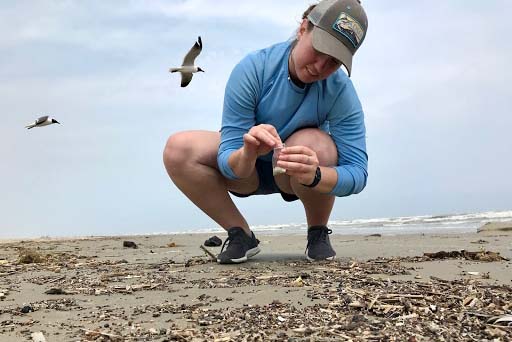 Originally from Mars, Pennsylvania, Caitlin grew up hiking, kayaking, rock climbing, and snowmobiling throughout the Appalachian Mountains and among the three rivers (Allegheny, Monongahela, and Ohio) that meet in Pittsburgh. In the summers, her mom would take her and her younger brother on extended beach trips to either the Outer Banks, North Carolina or St. Augustine, Florida where Caitlin spent as much time in the water as possible.

It was during her first sampling trip out to the Chandeleur Islands in Louisiana that Caitlin Wessel was struck by the pervasiveness of marine debris and the enormity of the issue. The Chandeleur Islands are part of the Breton National Wildlife Refuge, and are known for their pristine, natural environment. Yet as Caitlin collected and sieved seagrass cores, she and other researchers kept having to stop and pull out pieces of plastic. Astonished and a little dismayed, she wondered how marine debris was impacting other areas of the Gulf of Mexico if this remote, uninhabited island chain had plastic intertwined in much of the seagrass beds.

This experience launched Caitlin on a marine debris focused research and career path, and led her to her role as the Gulf of Mexico regional coordinator for OR&R’s Marine Debris Program. Her region includes Texas, Louisiana, Alabama, and Mississippi. She’s based in coastal Alabama, where she has lived for seven years. Since 2016, Caitlin has worked with partners to address marine debris issues, implement prevention and removal projects, assist with disaster preparedness, and foster collaboration across the region.

What Caitlin enjoys most about working on the Gulf Coast, besides sweet tea and cheese grits, is the community. 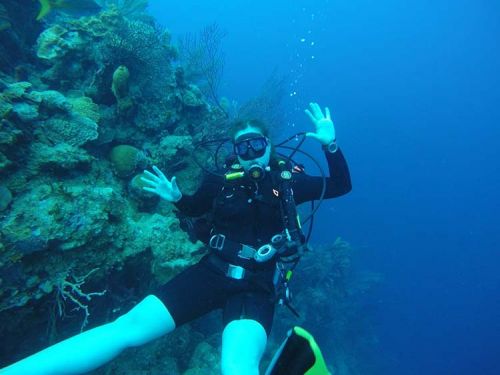 Diving off the coast of Belize. Image credit: Caitlin Wessel.

“They live and work on the water, and realize we all need to do our part to protect it,” Caitlin said. “It’s rewarding to work directly with partners to understand their needs and how we can work together to reduce marine debris issues.”

In one instance, Mississippi shrimpers were pulling up derelict crab traps that were getting caught in their trawls. Not only were these derelict crab traps catching (and killing) crabs and other non-targeted species, the traps were also damaging the shrimpers’ nets and reducing their catch, leading to an economic hardship they couldn’t afford. Collaborating with the Environmental Protection Agency Gulf of Mexico Program, Mississippi State University Extension Service, and two organizations representing the shrimpers, Caitlin worked with the team to develop a program that allows shrimpers to turn in derelict crab traps to be recycled and track how the traps impact them economically.

Caitlin also appreciates the variety of partners she gets to work with. Each spring she works with the Weeks Bay National Estuary Research Reserve to bring marine debris information, lessons, and projects to educators attending the Teachers on the Estuary (TOTE) workshop.

“Working directly with teachers is incredibly rewarding and a great way to get accurate information to students whose actions will be the key to reducing and preventing marine debris now and in the future,” Caitlin said.

While a good portion of her job keeps her in the office, Caitlin jumps at the opportunity to get out in the field when possible. She has participated in crab trap cleanups from Florida to Louisiana, recorded debris during shoreline surveys, collected data on research cruises with NOAA Fisheries, deployed to the Joint Field Office in Texas after Hurricane Harvey, and helped build and mount new monofilament recycling bins in Galveston, Texas. 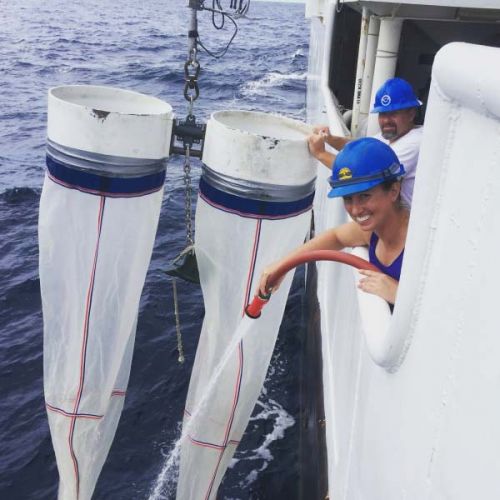 The most challenging part of her job is time management, Caitlin said, adding that “marine debris is a big issue with a lot of different components. I want to collaborate on all the different projects, attend all the marine debris related meetings, and help as much as I can, but in the end there is only so much time in a day, week, and year.”

Caitlin believes marine debris is such a popular topic right now because, “it’s easy for people to see the issue and appreciate the small changes you and I can make in our daily lives to help. It’s not an abstract issue; if you go to the local beach you can see marine debris”.

While working full-time as the Gulf of Mexico regional coordinator, Cailtin is also working on her doctoral thesis. Her dissertation is on “Marine Debris in the Northern Gulf of Mexico,” and she has published some of the first research on marine debris to come out of the region. This research includes quantifying tiny microplastics (measuring as small as 15 micrometers) and their impacts to the eastern oyster, rapidly assessing derelict vessels effects on coastal resources, and identifying accumulation rates of shoreline debris. This fall, Caitlin will defend her dissertation and graduate from the University of South Alabama’s marine science program, and she looks forward to having more free time.

In her free time, you will find Caitlin kayaking, diving and spearfishing in the Gulf, hiking with her dogs Cooper and Darwin, grilling, and reading. Caitlin and her partner Grant just built a new house, which is walking distance to the Gulf of Mexico. She enjoys taking advantage of the natural recreation and white sand beaches Alabama has to offer, and spends many weekends working on their new house.