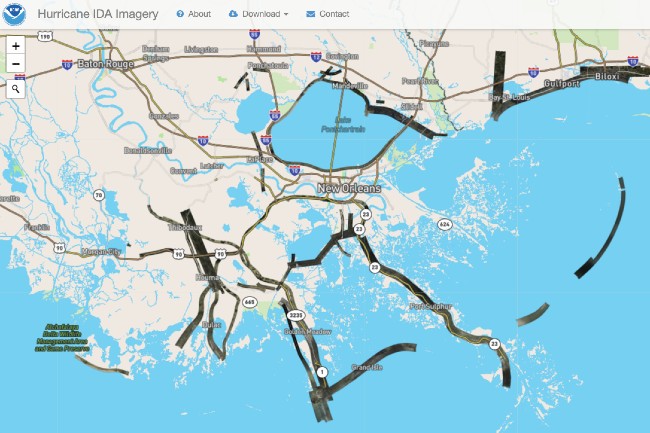 Sept. 3, 2021 — NOAA is providing direct scientific and technical support to federal and state agencies responding to pollution threats from Hurricane Ida. Hurricane Ida made landfall as a Category 4 hurricane on Sunday, Aug. 30, leaving behind a path of destruction and leaving over a million people without power along the Louisiana coastline.

Many groups within the National Ocean Service of NOAA, including all of the divisions within the Office of Response and Restoration, are supporting the response to the devastation brought on coastal Louisiana by the Category 4 winds and torrential rain.

Prior to landfall, OR&R’s scientific support coordinators worked closely with response agencies in anticipation of impacts to oil and gas and transportation infrastructure in the projected path of the storm. Disaster response plans are activated and NOAA teams stand on the ready to provide immediate support identifying and sharing information on where impacts occur.

Immediately after the storm made landfall, responders from NOAA’S National Response Team and the Office of Coast Survey deployed to the impacted region to help survey navigational waterways critical to marine transportation and the supply of vital resources to the heavily impacted region, such as emergency fuel, food, and other vital supplies. Survey crews work through very challenging conditions to deploy vessels in the ports and major navigation channels to identify sunken vessels and other obstructions that must be cleared to allow vital resources into and out of the heavily impacted region that serves as a critically important lifeline to the nation’s economy.

From Aug. 30 to Sept. 2, the National Geodetic Survey collected aerial damage assessment images in the aftermath of Hurricane Ida. Imagery was collected in specific areas identified by NOAA in coordination with FEMA, the U.S. Coast Guard, and other state and federal partners. The imagery was made immediately available to all response agencies in the region and posted on the NGS website as well as the Emergency Response Management Application (ERMA) to aid these agencies in conducting rapid damage assessments and targeting areas where deploying response resources are needed most. Collected images are available to view online via the NGS aerial imagery viewer. (View tips and a video on how to use the imagery viewer.)

Additionally, a methodical analysis of all available imagery is initiated by OR&R as soon as it is made available to assist local, federal, and state response agencies in determining the precise location of each potential pollution source and quickly evaluating the overall extent of potential pollution sources throughout the entire impacted region. Other NOAA resources such as the Office of Satellite Products and Operations (OSPO) in the National Environmental Satellite, Data, and Information Service begin sourcing satellite imagery in the storm’s path and employ analysts to evaluate the imagery for potential pollution releases and quickly disseminate reports to response agencies. This greatly enhances awareness of potential threats to the environment in areas that are otherwise mostly inaccessible to other more traditional assessment resources deployed from air, water, and land. Additionally, it does not put more demand on these resources such as aircraft and boat crews who are conducting critical lifesaving search and rescue missions immediately post storm.

Using aerial imagery, responders and contractors have identified a total of 906 pollution targets thus far, with more expected over the next week. These targets will later be confirmed on the ground by the U.S. Coast Guard and prioritized for response operations.

OR&R will continue to support response and recovery efforts in the region by providing scientific and technical support in pollution assessments and any resulting pollution removal actions.