The History of the RULET Database

The past centuries of commerce and warfare left a legacy of over 20,000 sunken wrecks along U.S. coasts. Most sunken wrecks are not oil pollution risks: they weren’t carrying oil as fuel or cargo; their oil spilled years ago, often lost catastrophically when ships were sunk during wartime, or released due to corrosion and decay. But we know some of these wrecks still have oil onboard, sheening periodically as they deteriorate.

Some of the wrecks are known to be intact and, based on accident investigation reports and cargo records, contain substantial amounts of oil and other hazardous cargo. Many of these sit out of sight, damaged, collapsed on the seabed—threatening to leak their oil cargo or fuel. NOAA, the U.S. Coast Guard, and other partners continue to work on bringing new technology and capabilities to support the assessment and removal of environmental threats. 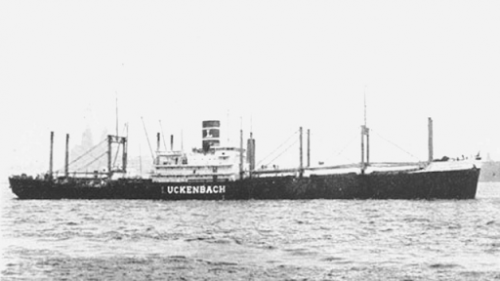 The threat from these wrecks was clearly illustrated by a decade-long series of mystery oil spills off the California coast. Each winter, oil and oiled birds would be found washing ashore near San Francisco in Monterey Bay and Greater Farallones National Marine Sanctuaries. In total, these episodic releases killed more than 50,000 birds. Samples from the oiled wildlife collected over the years matched chemically, but could not be linked to a contemporary source.

In early 2002, the decaying wreck of S.S. Jacob Luckenbach was finally identified as the source of those periodic oil spills. Loaded with 457,000 gallons of bunker fuel, the S.S. Jacob Luckenbach sank on July 14, 1953, approximately 17 miles west-southwest of San Francisco, and may have been leaking for more than 30 years. In the summer of 2002, NOAA joined with the Coast Guard, the state of California, and other agencies to support a commercial underwater salvage operation that removed approximately 100,000 gallons of oil remaining in the wreck.

The Luckenbach response, and several other underwater removal operations in the U.S. (and internationally), raised awareness of the substantial pollution threats from these wrecks. Improvements in satellite imagery have allowed agencies, including NOAA, to detect oil on the surface of the ocean in remote locations. Improvements in underwater technologies now allow salvage companies to safely and routinely assess conditions and conduct oil removal operations from sunken ships in a cost effective manner—but where to start? How many more oil-laden ships might be out there? The answer starts with historical research, two databases, and a rich tapestry of collaboration.

After the identification, assessment, and recovery actions associated with the Jacob Luckenbach, the NOAA Office of National Marine Sanctuaries started to inventory shipwrecks, dumpsites, and other hazards in and around national marine sanctuaries that could be potential pollution threats. The Resources and UnderSea Threats dataset, or RUST, identified over 30,000 targets in U.S. waters (Figure 1). Not all of these were shipwrecks; RUST includes hazardous waste dumpsites, munitions dump sites, and artificial reefs as well.

As noted in the figure, the numbers of potential targets was too large to be useful for contingency planning and response efforts. It was clear that a more refined data set that focused only on the most significant potentially polluting wrecks was needed. This data set would need to be based on the available historical data; contemporary accounts from technical and recreational divers and fishermen, where possible; and provide enough information to support decision-making efforts by the Coast Guard. 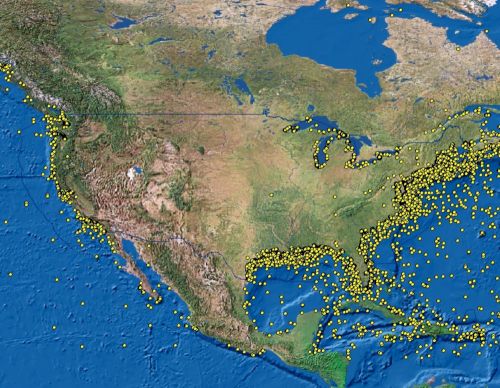 In 2010, Congress appropriated $1 million to NOAA to review and prioritize the potentially polluting wrecks in U.S. waters, including the Great Lakes. The NOAA Office of Response and Restoration's Emergency Response Division and the Office of National Marine Sanctuaries worked with the Coast Guard and other partners to review some 20,000 wrecks and identify those that most likely still contained significant volumes of oil.

The assessment project was delayed by the 2010 Deepwater Horizon oil spill, but in 2012 NOAA began the assessment in earnest, using a tiered approach to develop an initial priority list of wrecks for risk assessment. This process narrowed the 20,000 wrecks in U.S. waters down to 573 that met the initial high-risk criteria. However, additional research revealed that the number of wrecks posing a substantial pollution threat was much lower (107). This was due to the structural damage suffered by many ships as they sank and the intentional demolition of ships that were navigational hazards during World War II.

The project, known as the Remediation of Underwater Legacy Environmental Threats (RULET), was completed in 2013 and identified 87 wrecks for a risk assessment. NOAA’s RULET study further determined that 36 wrecks were the highest priority and at the highest risk of pollution discharge out of the 20,000 wrecks in U.S. waters. Due to the age of the initial 2013 RULET report, new reports of previously unidentified wrecks, and increasing detection of possible releases through NOAA satellite imagery, NOAA and the Coast Guard are rejuvenating efforts to reassess the highest priority RULET wrecks.