How NOAA Responds to Oil Spills: Science for Decisions 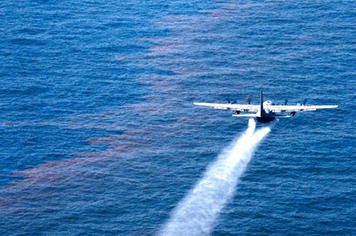 The Incident Commander—the person in charge of the spill response—uses overflight observations, computer model predictions, shoreline and biological assessments, and other information from OR&R to make response decisions.

In some cases, we may use one of our computer models to predict how quickly the oil will weather—that is, how its physical properties, such as density and viscosity, will change over time. This information is important to responders who need to choose which remediation or cleanup strategies to apply and when to apply them.

For example, the response team may decide to spray dispersant over spilled oil. Dispersants are chemicals that break oil into small droplets that degrade faster. But they don't work well if the oil is too weathered or viscous (thick like molasses). We use our observations and model forecasts to assess whether conditions will be appropriate for effectively applying dispersants.

We also can provide information that helps people decide what not to do during an oil spill response. For example, the results of studies performed by NOAA biologists on the effects of the cleanup of the Exxon Valdez oil spill suggest that under many circumstances, using hot-water washing to clean oiled beaches may do more harm than good. Our research suggests that by killing small plants and animals that have survived the oil spill, hot water cleaning sometimes may slow the recovery of the beach ecosystem.

Animals and plants that live in the water or along the coasts, and the habitats they depend on, are of special concern during spill response. Some types of birds, such as the common murre (Uria aalge), often do not survive oiling, even when they have been cleaned, so it is especially important to protect them from spilled oiled whenever possible.

Spill responders use our Environmental Sensitivity Index maps ("ESI maps") to identify the locations of sensitive animal and plant populations, important historical sites, and other places important to people.

On the ESI maps, shorelines are color-coded to show their sensitivity to oiling or cleanup activities. For example, shorelines shown in red are salt marshes that are especially vulnerable to oil. Symbols mark locations particularly important to consider during a spill response, such as areas where seals or sea lions congregate or breed (marked with a sea lion symbol), areas where different kinds of birds (such as shorebirds, waterfowl, or raptors) concentrate for feeding or nesting, and areas people use (such as an aquaculture facility, indicated on this map by an "AQ" symbol, and a recreational beach, marked by a sun umbrella). In addition, ESI maps, which are also available in GIS format, display more detailed information about species, habitats, and human-use areas for use by response specialists.

Responders use our ESI maps—along with our computer model predictions of the trajectory of spilled oil—to identify areas that need special protection from spills or attention during cleanup. For example, if our model predicts that an oil slick is likely to travel towards important wildlife habitat shown on an ESI map, and it's the time of year when the animals are present, the spill response team may decide to protect this area by placing a boom (a floating barrier designed to keep oil out) around it.

During the 1989 Exxon Valdez oil spill, OR&R was part of the team developing a standard and systemic method for surveying the shoreline affected by the spill. The result was the Shoreline Cleanup and Assessment Technique (SCAT). SCAT teams collect the data needed to develop a shoreline cleanup plan that maximizes the recovery of oiled habitats and resources, while minimizing the risk of injury from cleanup efforts.