The #2 starboard tank was punctured, spilling approximately 168,000 gallons of oil. The barge is now aground and the remaining oil was lightered (removed) late Sunday. The M/V Summer Wind is stable and not leaking oil. As of March 23, the Houston Ship Channel and Intracoastal Waterway was closed to traffic, including ferries and cruise ships. U.S. Coast Guard, NOAA, U.S. Fish and Wildlife Service, the Texas General Land Office and other agencies are responding. NOAA is providing scientific support to the U.S. Coast Guard, including forecasts of the floating oil movement, shoreline assessment, information management, overflight tracking of the oil, weather forecasts, and natural and economic resources at risk. Marine mammal and turtle stranding network personnel are also standing by. The NOAA Weather Service Incident Meteorologist is on-scene, as are additional NOAA personnel. Natural resource damage assessment personnel will be at Galveston Bay to initiate studies that could be used to identify injured resource and restoration needs. 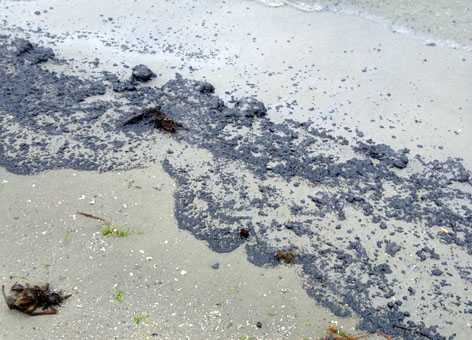 Oil on the beach following the oil spill in Galveston Bay. (U.S. Fish and Wildlife Service)

Expected Behavior of the Spilled Oil

Intermediate fuel oils are produced by blending heavy residual oils with a light oil to meet specifications for viscosity and pour point. Their behavior can be summarized as follows:

The incident occurred just inside the entrance of Galveston Bay. Northeasterly winds are expected to carry the oil out of the Bay, but onshore winds expected midweek could bring the oil back along the ocean beaches. The oil, likely in the form of tarballs, could be spread over a large section of ocean beaches. 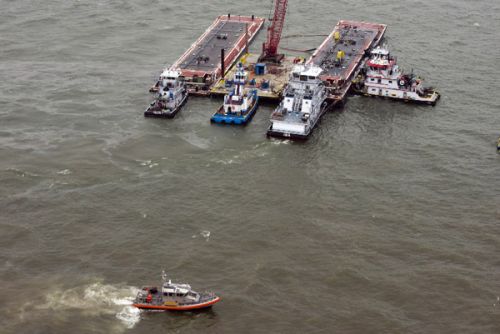 A Coast Guard response boat patrols the Kirby Barge 27706 during cleanup efforts near TexasCity Dike, March 23, 2014. The oil spill occurred, Saturday, after a collision between a bulk carrier and the barge. (U.S. Coast Guard)
Back to top