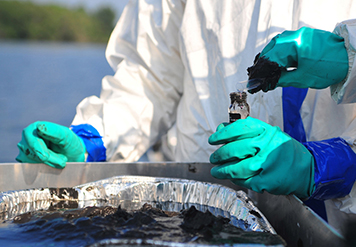 When fingerprinting an oil, chemists have to examine the relative ratios of different hydrocarbons in an oil to determine where it came from. (U.S. Coast Guard)

Because many different types of oil exist, we may need to tell one oil from another during a spill. The chemical composition of oil found in the environment yields important clues about its origin.

This process of determining where a sample of oil (or hydrocarbon residue) originated is what we call "fingerprinting."

Fingerprinting oil to discover its source is a complex procedure that has both qualitative and quantitative components. Virtually all oils contain the same hydrocarbon structures, but the relative quantities of these structures depend on the source of the oil.

As a result, oil fingerprinting relies on the expertise and experience of an analytical chemist, who compares the relative quantities of hydrocarbons unique to petroleum in the spilled oil versus the source oil.

This process also has to take into consideration the effect of weathering on these relative quantities; therefore, chemists refer most often to hydrocarbon ratios resistant to the changes that occur during weathering. 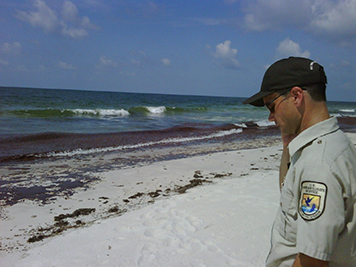 Fingerprinting is used to confirm the source of spilled oil in the environment. (U.S. Fish and Wildlife Service)

Similar to the literal uses of fingerprinting, experienced chemists can analyze the evidence left at a "crime scene" (site of an oil spill) to make a reasonable determination of "whodunit"—that is, if a hydrocarbon residue is in fact oil, where it might have originated, and, hopefully, who spilled it.

That said, the level of certainty in any determination can vary depending on the scenario.

Often working with NOAA and chemistry laboratories across the country, the U.S. Coast Guard uses these types of forensic methods to determine who is responsible for pollution when an oil spill with no known source appears on the ocean surface or a shoreline.

During most large oil spills, fingerprinting is used to confirm that oil in the environment is from the suspected source and not from other inputs like bilge tanks from nearby ships or natural oil seeps.

In some areas of the world, such as southern California and the Gulf of Mexico, many natural oil seeps are known to release petroleum and natural gas into the water. This can complicate the assessment of oil spill impacts but serves to emphasize the importance of the chemical fingerprinting process.